Excerpt Tour: Wishing for a Cowboy by Victoria James

Today we have the release day blitz of Victoria James’ Wishing for A Cowboy! Check out this gorgeous new romance and be sure to get your copy today! 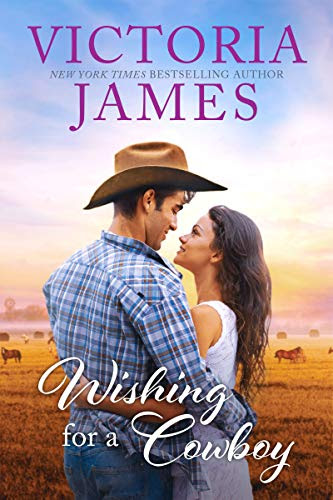 Title: Wishing for A Cowboy
Author: Victoria James
Genre: Contemporary Romance
About Wishing for A Cowboy:
𝑭𝒓𝒐𝒎 𝑵𝒆𝒘 𝒀𝒐𝒓𝒌 𝑻𝒊𝒎𝒆𝒔 𝒃𝒆𝒔𝒕𝒔𝒆𝒍𝒍𝒊𝒏𝒈 𝒂𝒖𝒕𝒉𝒐𝒓 𝑽𝒊𝒄𝒕𝒐𝒓𝒊𝒂 𝑱𝒂𝒎𝒆𝒔 𝒄𝒐𝒎𝒆𝒔 𝒂 𝒉𝒆𝒂𝒓𝒕𝒘𝒂𝒓𝒎𝒊𝒏𝒈 𝒍𝒐𝒗𝒆 𝒔𝒕𝒐𝒓𝒚 𝒂𝒃𝒐𝒖𝒕 𝒇𝒂𝒎𝒊𝒍𝒚, 𝒇𝒐𝒓𝒈𝒊𝒗𝒆𝒏𝒆𝒔𝒔, 𝒂𝒏𝒅 𝒕𝒉𝒆 𝒕𝒓𝒖𝒆 𝒎𝒆𝒂𝒏𝒊𝒏𝒈 𝒐𝒇 "𝒉𝒐𝒎𝒆."
Janie Adams has been a single parent to her nephew since he was a baby. Fifteen years later, she’s finally found out who his father might be, so the two of them travel across the country to find him. She’d do anything for this kid. But when they arrive in the small town of Wishing River, Montana, and Janie finally meets the ruggedly handsome cowboy she’d been told had abandoned his son, his shocked response changes everything.
Aiden Rivers can’t dispute this is his kid when he sees his own features staring back at him, but he had no idea Janie’s sister was pregnant when she left him. He didn’t even know she had a sister—clearly they’d all been lied to. Now he has fifteen years of fatherhood to make up for and no idea how to be a dad. This was never in his plans.
Janie sticks around to help him ease into parenting, everything from showing him how to lure a sulky kid out of his bedroom to keeping up with the latest teen-speak. Together, they surprisingly make a good team, this city girl and country boy. But when the past catches up with them, Aiden and Janie must decide what’s best for the boy who's connecting them, not only for each other…which could mean splitting them apart.

Aiden tensed at the sound of someone whispering. He quietly left the kitchen and spotted Morris jumping on the couch and Janie sitting up.

He heard a sigh, and then the table lamp turned on. Janie was sitting up, wrapped in a blanket, a tangle of gorgeous, shiny hair around her head. She snatched her glasses from the end table and put them on. “Couldn’t sleep, actually.”

Her gaze flickered over him, and then her face turned red. He hadn’t bothered with a shirt because he didn’t think he’d see anyone and he was used to being the only person in the house. His plan had been to take his coffee back to his room.

“I, uh, didn’t think you’d be awake. I’m just going to go grab a shirt. Coffee is brewing if you want some,” he said over his shoulder, heading back to his room, trying to brush off the strange sense of intimacy that hit him when she looked at him.

When he came back, Janie was in the kitchen, still wrapped up in the blanket, drinking coffee. She quickly poured him a cup. He found the hurried gesture odd but chalked it up to the nerves of being in a stranger’s home. “Thanks,” he said, accepting the mug.

He noticed she went out of her way to not touch him, and if he hadn’t been fast, the cup would have ended up on the floor. “So…why couldn’t you sleep? Is it the couch? I really don’t mind switching with you.”

She shook her head, her eyes on him as she took a sip of coffee. “No, no. It’s not the couch,

He ran a hand through his hair. “Yeah. Tell me about it.”

“You’re not on any social media,” she said abruptly, tilting her head, her eyes on him intently.

He swallowed, having the distinct feeling he was being evaluated again. That was fine. Deserved. “I’ve lived in Wishing River my entire life. I know everyone I need to know, and I know way too much about them already. Why would I want to see these same people online? Selfies and all that? No thanks.”

She smiled as though that answer was acceptable. “You were looking me up?”

She shrugged, the blanket falling slightly, revealing a glimpse of the smooth, creamy skin of her shoulder and the strap of a pink tank top. He tore his gaze from that and kept his eyes on hers. “I had looked you up before, but it dawned on me as I was lying on the couch that we really don’t know much about you. And you don’t know me, either, but I don’t just sleep at strange guys’ houses, especially not with my nephew, who I’m supposed to be protecting.”

He kept his expression neutral and definitely didn’t open his big mouth until he could appropriately filter his thoughts.

About Victoria James:
Victoria James is a New York Times and USA Today bestselling author of contemporary romance.
Victoria always knew she wanted to be a writer and in grade five, she penned her first story, bound it (with staples and a cardboard cover), and did all the illustrations herself. Luckily, this book will never see the light of day again.
In high school, she fell in love with historical romance and then contemporary romance. After graduating from University with an English Literature degree, Victoria pursued a degree in Interior Design and then opened her own business. After her first child, Victoria knew it was time to fulfill her dream of writing romantic fiction.
Victoria is a hopeless romantic who is living her dream, penning happily-ever-after's for her characters in between managing kids and the family business. Writing on a laptop in the middle of the country in a rambling old Victorian house would be ideal, but she's quite content living in suburbia with her husband, their two young children, and very bad cat.
Sign up for Victoria's Newsletter to stay up to date on upcoming releases and exclusive giveaways, follow her blog for daily antics and insight into her daily life, and get to know her on Twitter and Facebook. She loves hearing from readers! www.victoriajames.ca