Shift of Morals by K. Webster
Release Date: March 26th
Add to Goodreads
AVAILABLE NOW!!!
FREE in Kindle Unlimited! Amazon US | Amazon UK | Amazon CA  Amazon AU
Blurb:
I found him when he was a boy.
Bloody. Mangled. Near-death.
If I’d been a merciful alpha, I would’ve snapped his neck and ended him right then.
Except, I didn’t.
Something in his big brown eyes tugged at my heartstrings.
I kept him. Healed him. Raised him to be fierce, loyal, and brave.
Now that he’s an adult, everything’s changing.
He’s no longer the soft, scared beta I once thought he was.
No, there’s an uncontrollable anger inside him.
A rage-filled hate I don’t understand.
As a dangerous pack begins tormenting us and destroying our home, I feel him pulling from me as he seeks justice.
He thirsts for revenge, even if it means leaving our pack and going solo.
But, as his alpha, I won’t let him go without a fight.
Each time he pushes, I pull him right back to me.
I’ll keep him locked in my arms or pinned beneath me forever if that’s what it takes to keep him.
A shift of morals has begun.
One I don’t understand, but certainly don’t resist.
I’m the most powerful wolf on Beacon Island. I don’t have weaknesses.
Until now.
This wild, reckless young man changed everything when he stole my heart.
This book is a steamy standalone MM age-gap shifter romance. No other books need to be read before or after this one as it is a complete story.
***This is the fifth book to release in the Kingdom of Wolves collection but is a COMPLETE STANDALONE. It’s meant to be read on its own and is a full story with a happily ever after.*** 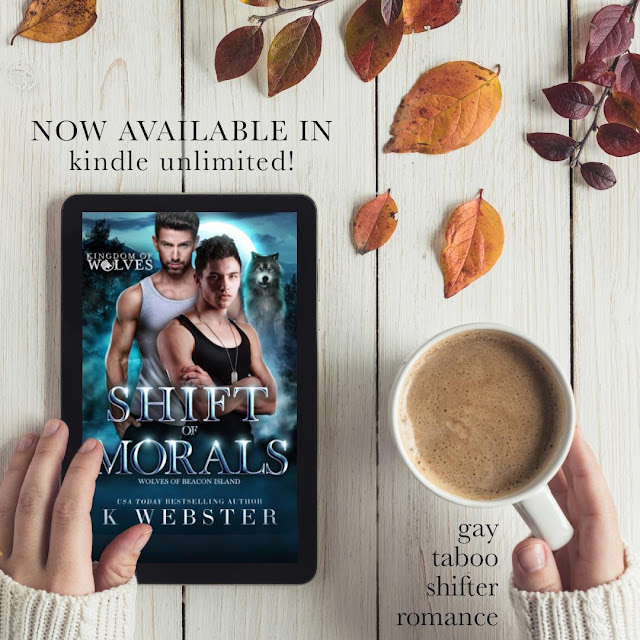 About K. Webster:
K Webster is a USA Today Bestselling author. Her titles have claimed many bestseller tags in numerous categories, are translated in multiple languages and have been adapted into audiobooks. She lives in “Tornado Alley” with her husband, two children, and her baby dog named Blue. When she’s not writing, she’s reading, drinking copious amounts of coffee, and researching aliens.
Connect w/K. Webster: Website | Facebook | Twitter | Instagram | Goodreads | Bookbub | Amazon | Newsletter Signup
Posted by Reese's Reviews at 12:00 AM