We are so excited to be bringing you the release of DECLAN by Anna Castor! If you love all things contemporary romance and family sagas then you don't want to miss out on this latest release in the Lucky Irish Series! 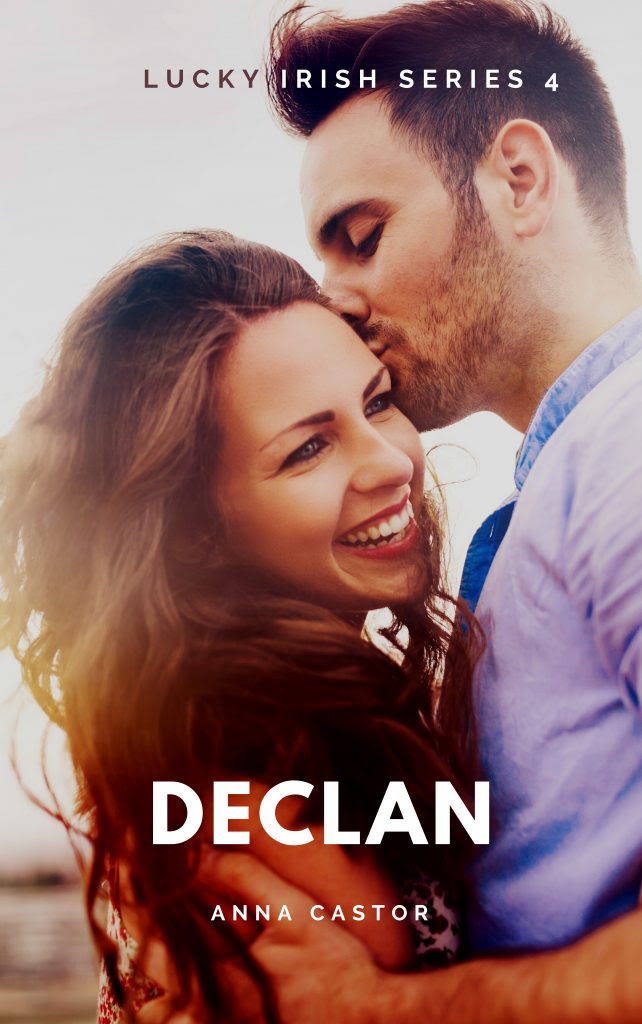 With these words, Declan Mills broke Bree’s heart, and his own. By trying to save their friendship, Declan did something he’d never done before: he lied to Bree.

Bree picked herself up and tried hard to move on from her infatuation that had lasted nearly two decades. About time, right? Wrong. One night, the former best friends gravitate together, binding their lives forever.

Declan made a mistake by choosing friendship over love. But can he win over Bree’s heart again?

Declan is book four in the Lucky Irish series about the ups and downs of several Irish families in Austin, Texas. Each book is an interconnected standalone. As we read a new sexy romance, we can also catch up with favorite characters throughout the series.

Add DECLAN to your TBR!

Get your copy of DECLAN on Amazon! 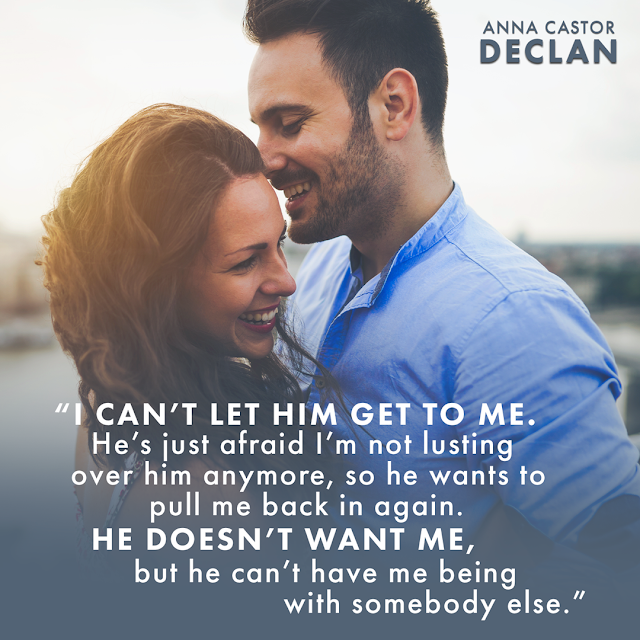 Bree stopped in her tracks. The red paint of the small porch pained her eyes. That damn stubborn ass. After all the color-coding and Bree’s efforts in persuading him to go for a more gentle looking pale blue, Declan still went ahead with this God-awful vermillion.

Dec needed his head examined. She righted her little black dress and stomped in her high heels over said ugly red porch as Dec opened the door.

“And? What do you think?” he smiled a mile wide and opened his arms, showcasing a job he figured well done.

She shook her head as she walked up to him. Because if he would really listen to her—or take notice, he’d known how her stomach flip-flopped at the mere sight of his dimples. How her heart skipped a beat at his smiling gray eyes. Damn, she was a mess. She would even put up with this hideous porch if it meant she’d live here with him, waking up every day in those muscular tanned arms.

“Squirt...” he said, and Bree winced at his nickname for her. She wasn’t the six-year-old tomboy following him around anymore. In front of Declan stood a twenty-six-year-old who just had an emergency video chat with her sister Gwenn about her outfit tonight.

She was on a mission. The normal ‘one-of-the-guys-Bree’ wouldn’t cut it. Tonight, she wasn’t the girl next door and Dec’s best friend in her favorite sweater and jeans. No. In front of Declan stood a WO-MAN.

Yes. She emphasized it out loud in her head and his smile faltered. He could always read her mind. So, how he didn’t read the signs of her pining and lusting over his Irish ass was the greatest mystery of all times.

Maybe he didn’t want to hurt her feelings by addressing it. Or he was afraid to have the same conversation she was about to have with him. Telling him how she felt might ruin their friendship. They both avoided this topic. Well, either way, tonight would be the start of a new chapter in their relationship. Hopefully, a chapter filled with lots of clothes ripping…

“I know, I know…” he said as he held up his hands, making his black stained T-shirt creep up from the top of his dusty jeans. She bit her bottom lip at the sight of his dusty trail of hair going down beneath his belt buckle. Bree cleared her throat.

“Yeah, I know. You’re right. I should have listened to you. But at least for now, it has a coat of paint.” He shrugged before he opened his arms for her to step into. She couldn’t remember the time he wouldn’t invite her into his arms for a hug.

Even wearing a new dress for this special occasion couldn’t hold her from hugging his dirty torso. Clean, manly sweat and wood dust. She placed her cheek on his chest to get her fill. He squeezed her tighter for a moment and stepped back to travel his eyes over her.

“You seem different. What did I miss? Didn’t we talk this morning? What’s up?” Declan said as he took her biceps in his calloused hands. The observant cop side of Dec scrutinized her expression as he narrowed his eyes.

“Geez. I’m wearing make-up? Maybe that’s it?” Bree said as she tucked a curl behind her ear.

“No. That’s not it. It’s something in your eyes, not on your eyes. Your eyes always speak volumes to me. And they’re telling me there’s something going on you’d rather not say. What’s the matter?”

Bree sighed and shook her head. Why was this so hard? He was her best friend. She usually told him everything. Well, perhaps not that she’d masturbated this morning after hanging up the phone with him. His raspy voice after he’d just woken up had gotten her all hot and bothered. She’d needed some kind of relief before going into work and had made do with the showerhead.

Oh, how she longed to feel the real deal instead of getting off on just the thought of Declan. They stood so close she could almost taste him. Bree took a deep breath, full of his scent, and closed her eyes for a moment.

“Dec…” she said as she opened her eyes. His name came out in a pained whisper.

His eyes searched hers for answers. As he cocked his head, his charcoal longer hair on top swished over his frowned forehead.

She swallowed the big lump in her throat and said, “I’m in love with you.”

His brows shot up, and he took a step back from her. His hands let go of her upper arms. Losing his warmth and the lack of a verbal response made her involuntarily shiver. She looked up through her eyelashes and winced at his expression.

Dec rubbed his neck, exposing his hard bicep next to his ear. A smear of ugly vermillion paint graced his elbow. He shook his head in disbelief.

She swallowed back the tears threatening to overflow her eyelids. After a few hefty blinks, the first damn tears descended. Declan wasted no time and beat her to it as he wiped them away with his thumb.

He took her cheeks in between the palm of his hands and for a moment, she was sure he would lean in and kiss her. His stormy eyes locked onto hers, but she couldn’t read him. How could he control his emotions like this? Didn’t she affect him as he did her?

“Say you feel this too, Dec,” Bree said. The pleading in her voice was clear.

Bree’s heart rate went sky high, but his pained stare demolished all hope. And his next words shattered her heart into a thousand pieces. 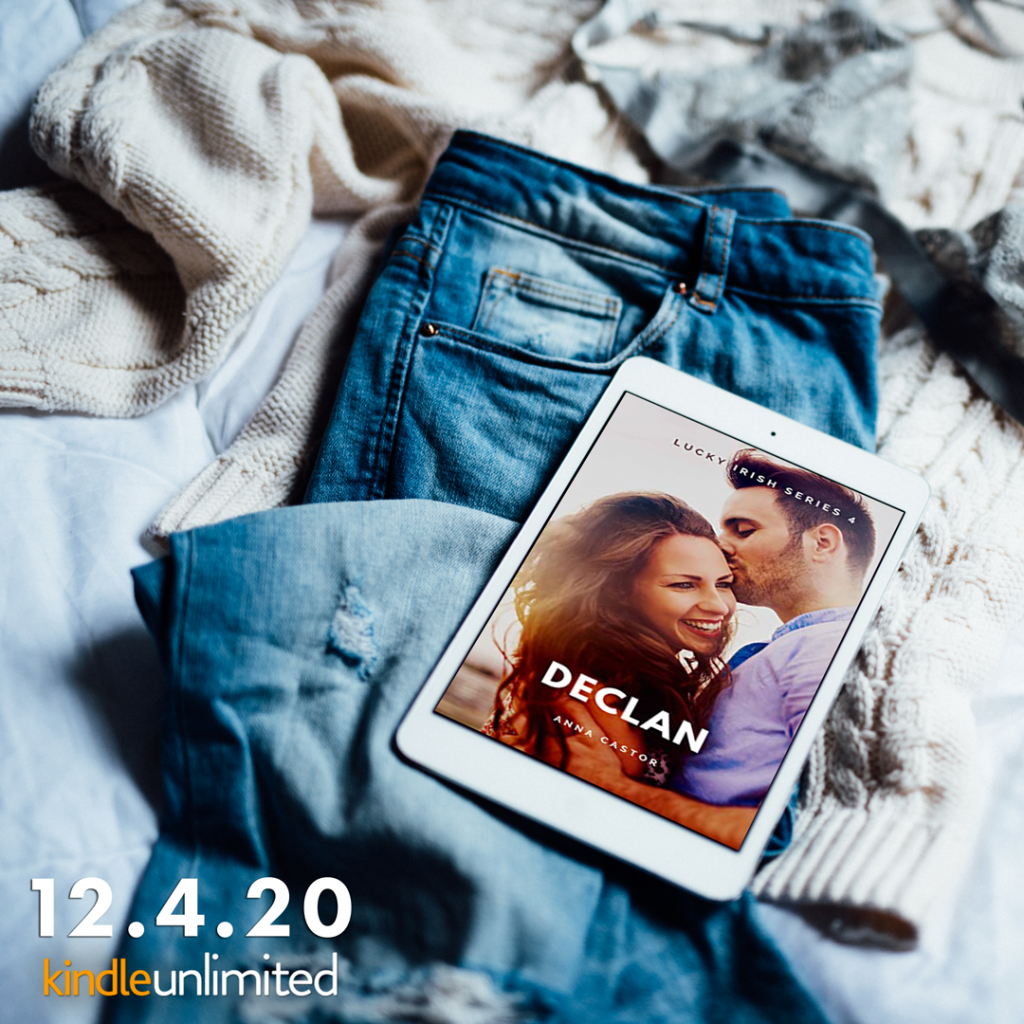 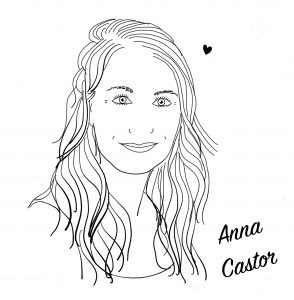 Anna loves to write heartfelt and steamy romance series. She falls in love with her characters as they go through their ups and downs. Anna laughs out loud behind her laptop as she writes the banter between siblings. Sometimes she cries as a result of the real talk that comes with family. There's no hiding from a nosy Pops ;-) Her books are for mature readers only because of their steamy content.
Author of the Lucky Irish series. A series about several large and close-knit Irish families in Austin, TX with strong heroines, quirky family banter, and steamy alpha's.
Anna is a former wedding photographer turned author. While photographing weddings, Anna loved being a part of the couple's special day to tell their (love) story through her pictures. Each wedding had a different story to tell: the histories of the bride and groom, their family dynamics, their challenges in life, and of course, how they met and fell in love.
And now Anna takes her readers through the troubles and hardships her characters may come across on their journey to a happily ever after.
Website | Facebook | Instagram | Goodreads
Posted by Reese's Reviews at 12:00 AM