I am thrilled to be hosting a spot on the WILD, DARK TIMES by Austin Case Blog Tour hosted by Rockstar Book Tours. Check out my post and make sure to enter the giveaway! 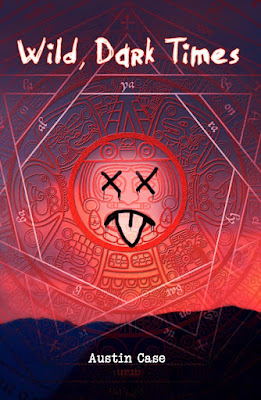 
It's the summer of 2012 and Elizabeth Megalos is a
disillusioned art-school grad getting by as a bank teller in St. Louis. One evening, she’s attacked by a possessed coworker and saved by a mysterious, wise-cracking sorcerer named Eddy. He drags Elizabeth and Hugh—a skeptical scholar of the occult—to Europe, where he introduces them to his three magical celebrity friends. Once there, Eddy explains the group's mission: preventing a Demiurge—a creature out of Gnostic Christian mythology—from fulfilling the visions of doom in the Book of Revelation. The Demiurge has been drawing power from the misguided beliefs in the Mayan apocalypse and is set to start the destruction on Dec. 21st, 2012. Through ritual magic and a series of
psychedelic experiences, the group learns that Elizabeth is the key to taking down the Demiurge, though she can't imagine how she will be the one to stop Armageddon.

EXCERPT:
When Elizabeth arrived home, she flipped off her shoes, kicking them underneath the table next to the door like she always did. She had about an hour until Maya would arrive, and she decided to relax by watching one of the cooking programs in her Netflix queue. She lay on the couch while a celebrity chef explained a recipe for fast, healthy, and delicious pierogis. As she zoned out to the show, she realized that the program was getting darker, as though the light saturation was being fiddled with on her screen. She picked up the remote and tried to adjust the brightness, but the screen only continued to darken. She tried turning the television off to no avail. The screen completely darkened, and then a figure emerged on the screen. It wore a hood and its face was obscured. The moon hung low behind the figure. She watched as the figure shattered like a glass statue, then reformed as a horrifying insect in the sky, blotting out the moon.


Elizabeth shot upright, seeing hands kneading dough on the television screen, and realized she had been dreaming. She shuddered, recoiling from the dream. Damn. That was creepy. It was now about 8:30, half an hour later than Maya’s ETA. Huh. I wonder if I missed the doorbell ringing. She sent Maya a text saying: Was sleeping. Did I miss u?


Maybe she flaked. It wouldn’t be that unlikely given Maya’s habit of showing up to work late and having semi-regular lapses in attendance, though she had never bailed on any of the meetings to talk about her tattoo ideas. Still, Elizabeth was relieved. She wasn’t in the mood to give fake praise to banal drawings.


She went to the kitchen to grab an apple. As she bit into the fruit she heard a knocking at the door. Ugh... really, Maya? Right when I think I’m in the clear, she shows up. As she headed to the door, the knocking continued in a steady rhythm.


As Elizabeth opened the door Maya grabbed her and flung her to the floor.


Maya thrashed and clawed Elizabeth at the same pace that she had been knocking on the door. Elizabeth screamed and struggled helplessly in an attempt to throw her off. Maya’s blue- painted fingernails dug into the flesh near Elizabeth’s collarbone. Blood dripped off the yellow enamel. Suddenly, Maya was tossed off Elizabeth’s body. She crashed backward through the front door, which was promptly slammed shut and locked by a man now standing in her entryway looking down at her.


Giveaway Details:
5 lucky winners will win a signed finished copy of WILD, DARK TIMES, US Only. 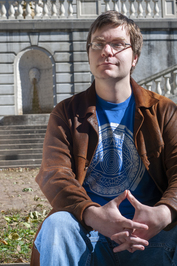 Austin Case received a Master's Degree from the University of Amsterdam in Western Esotericism and Mysticism. His academic
knowledge of the occult and other peripheral phenomena has given him a unique take on fantasy and other speculative fiction.