Review: To Catch an Earl by Kate Bateman 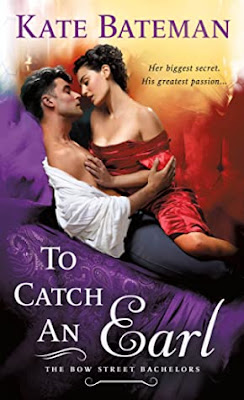 
Blurb:
A case of secret identities finds reunited lovers on opposite sides of the law in this fun, flirty Regency romance.

There's only one case Bow Street agent Alex Harland, Earl of Melton, hasn't cracked: the identity of the mysterious woman who stole a kiss from him before he left for war. He's neither forgotten--nor forgiven--her for leaving him wanting. When he starts investigating the Nightjar, an elusive London jewel thief, he keeps running into the alluring Emmy Danvers, who stirs feelings he hasn't felt in years.

Even though Emmy's loved Alex for years, she can't risk revealing her heart, or her identity as the Nightjar. With Alex on her case, Emmy knows that her secrets are in danger of being discovered. Their cat and mouse game heats up with every interaction, but when Emmy's reputation--and life--is at risk, will Alex realize that some rules are made to be broken for love?

My Review:
To Catch An Earl. was a very cute read. I really enjoyed Kate Bateman's writing and she definitely has me wanting to read her other books.

Emmy has been thief her entire life. One night she dances, kisses, and runs away from her long time crush Alex Harland before he went off to war. Now four years later Alex is back as an investigator. His latest case? Finding the person stealing all these rare gems. Who just happens to be Emmy, the woman who Alex hasn't been able to get out of his head.

Emmy was by far my favorite of these two characters. I loved her. She was fun and feisty and sneaky. I love how she was always able to keep Alex on his toes. Alex and Emmy were the perfect matches for each other. The storyline was very fun and I loved how a lot of the story was a chase after one another.

To Catch An Earl was a very fun read. I loved the main characters, the pacing, and the plot. This is an absolute must-read. 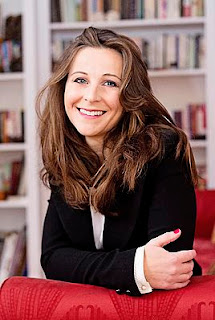 Kate Bateman, (also writing as K. C. Bateman), is the #1 bestselling author of Regency, Victorian, and Renaissance historical romance. Her Renaissance romp, The Devil To Pay, is a Romance Writer’s of America 2019 RITA® Finalist and her Regency-set A Counterfeit Heart (Secrtes & Spies series) won the 2018 Book Buyer’s Best contest for Best Historical Romance.

Kate wrote her first historical romance in response to a $1 bet with her husband who rashly claimed she’d ‘never finish the thing.’ She gleefully proved him wrong. Her books feature her favorite intelligent heroines, (badasses in bodices!) wickedly inappropriate banter, and heroes you want to both strangle and kiss.

When not traveling to exotic locations ‘for research’, Kate leads a not-so-secret double life as a fine art appraiser and on-screen antiques expert for several TV shows in the UK, each of which has up to 2.5 million viewers. Before writing romance, Kate was director and valuer at her own UK Auction House, Batemans in Stamford, Lincolnshire. She currently splits her time between Illinois and her native England and writes despite three inexhaustible children and that husband . . .who still owes her that dollar.