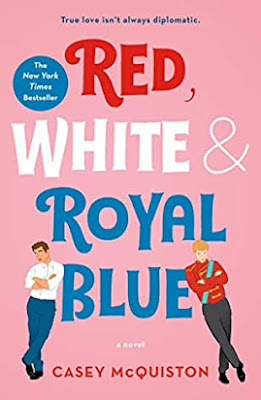 Blurb:
A big-hearted romantic comedy in which the First Son falls in love with the Prince of Wales after an incident of international proportions forces them to pretend to be best friends...

First Son Alex Claremont-Diaz is the closest thing to a prince this side of the Atlantic. With his intrepid sister and the Veep’s genius granddaughter, they’re the White House Trio, a beautiful millennial marketing strategy for his mother, President Ellen Claremont. International socialite duties do have downsides—namely, when photos of a confrontation with his longtime nemesis Prince Henry at a royal wedding leak to the tabloids and threaten American/British relations.

The plan for damage control: staging a fake friendship between the First Son and the Prince. Alex is busy enough handling his mother’s bloodthirsty opponents and his own political ambitions without an uptight royal slowing him down. But beneath Henry’s Prince Charming veneer, there’s a soft-hearted eccentric with a dry sense of humor and more than one ghost haunting him.

As President Claremont kicks off her reelection bid, Alex finds himself hurtling into a secret relationship with Henry that could derail the campaign and upend two nations. And Henry throws everything into question for Alex, an impulsive, charming guy who thought he knew everything: What is worth the sacrifice? How do you do all the good you can do? And, most importantly, how will history remember you?


My Review:
I'm going to try and not be the world's largest douche canoe while writing this, but I did not enjoy this book. Like at all. I made it through which is how it didn't end up with one star and I also gave it a point for at least trying to do something interesting. However, that's pretty much as far as my love for this story goes.

Honestly, all the hype around this story had me super excited. It's been quite some time since I've read anything current, and while yes I know this book came out last year, I've struggled to read anything published within the last three so this was extra exciting for me to see a copy at the library.

Now let me just say this is only my opinion and I'm not going to be disrespectful of the author or anything like that during this review. Writing a book is incredibly difficult and I am not going to bash all of Casey McQuiston's work simply because I didn't enjoy this book. I'm not saying "F*** this book, it's a POS," I'm just saying that I didn't like it and why.

Let me start with my biggest glaring issue. Alex the main character. I didn't like him. I thought he was rude and full of himself in a way that wasn't likable for me. Throughout this story, I struggled to find any redeeming qualities to him. I think the nail in the coffin for me was when he said "I want to get into politics because I care about people." Yeah... I don't know I just wasn't buying it. Like at all. That line felt like horsecrap coming from him because he was such a major douchebag.

The other issue was how he treated the prince. Alex could not have been a crapper person to him. If you didn't know they were going to end up together and rooting for them because you know they'll be together, I honestly don't think you'd be wishing Alex on poor Henry. Alex didn't like Henry because he was rude to him once right after his dad passed away... yeah okay, maybe like don't think about yourself for more than two minutes?

Alex is the main narrator in this story and probably the main reason I just couldn't and wasn't feeling this story.

My other issue? The pacing. We go from chapters one through four with Alex hating Henry, to chapter five or maybe six where Alex is sucking Henry's dick and there's like no lead-up. There's no Alex thinking about his sexuality. There's just "oh Henry kissed me, let me suck his dick." Like wow, that's a lot to take in so quickly.

The other issue with pacing was that this book felt unnecessarily long. All the political stuff I wish would have just F'd off. I wasn't remotely interested in it and I just wanted it to go away. Instead, we got chapter and chapter of political blah blah blah. If you're into that kind of thing, maybe you'll like that. And that's not to say I'm not politically inclined. I am. I vote in every election. I post about political stuff on my pages. I talk about politics and at work, I try and make sure that people aren't using their biases against the students we work with.

Let me get to the last issue I have for this story and semi bitch fest. I didn't buy this story. Like at all. Here's what I mean. Red, White & Royal Blue tried to sell the fact that the U.S. had their first female president who had biracial children. The president in question was a Democrat who wasn't married to her first husband, and you're telling me we'd be struggling with the issue of her son being gay? That people who voted her into office wouldn't be signing her up again for office because of the fact that Alex is gay? Really? I don't buy it. We're so far from having our first female president I don't see how we'd still be having issues with them having gay children. Dick Chaney's daughter is gay. No one gave a flying F about that.

This story also tried to sell the fact that the Royal family was promoting that Henry marry some girl and have children while screwing Alex on the side. Ummmm in the world of social media and all that? Please. They even made that a focal point. That media is everywhere and that people are always taking photos of everywhere all the stinking time. I just..I don't know all that much about the royal family, but this feels like it wouldn't be happening.

So, that felt like a lot but needless to say I was disappointed with this story. I wanted to like it. I really did. I'm a mega-fan of M/M romance stories and this concept just seemed like the bee's knees. Sadly this one just fell flat for me and while I'm not sad I read it, I won't be promoting this book to anyone. But again, this is just my opinion. A lot of people seemed to really love this story and I think that's great. It just wasn't for me.

Casey McQuiston grew up in the swamps of Southern Louisiana, where she cultivated an love for biscuits and stories with big, beating hearts. She lives in the mountains of Northern Colorado, with a collection of jean jackets and her poodle mix, Pepper.