I am thrilled to be hosting a spot on the HONOR AVENGED by Lynn Veevers Blog Tour hosted by
Rockstar Book Tours. Check out my post and make sure to enter the giveaway! 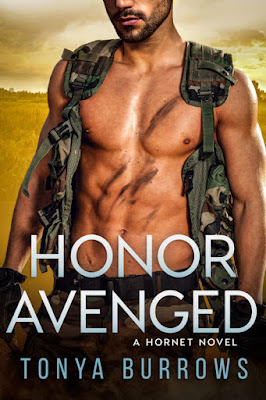 Leah Giancarelli makes balancing her new role as a single mom look easy, but she’d have crumbled if not for her late husband’s best friend, Marcus. She has her issues with HORNET, an elite hostage rescue team—after all, Danny would still be alive if he’d never accompanied them on their last mission—but Marcus has always been by her side, a strong shoulder to lean on…

Until, after one impulsive kiss, he’s so much more.

Eaten alive by guilt, Marcus takes off, leaving both HORNET and Leah behind. Alone is easier. Safer. Because his feelings for Leah are all kinds of wrong, the worst kind of betrayal, and he can’t trust himself not to act on them.

But Danny’s death was only the beginning. Whoever hired the hitman is looking for something, and they think Leah knows where it is...

Each book in the HORNET series is STANDALONE:

My Review:
Honor Avenged was very good. I've enjoyed Tonya Burrows writing for some time now and was extra excited to read this story.

Leah lost her husband when he was working with his best friend and the HORNET group on a mission. Now she's a single mom trying to figure out how to take care of her children by herself without any support. Her husband's best friend, Marcus up and left after they shared a kiss and now she's being hunted. Marcus' mom sends her on a mission to find and bring Marcus home after they're all attacked, which leads to Leah's bringing danger to Marcus' doorstep too.

This was such a fun adventure story. I enjoyed how Marcus and Leah grew from their friendship to love and how they both learned to let go of certain things. The story was full of twists and turns and I was very happy with the characters, pacing, and the story as a whole. 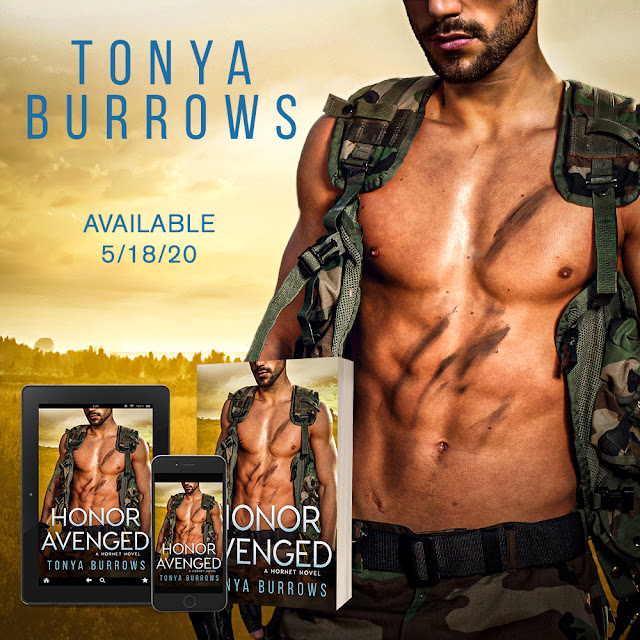 Excerpt:
“Leah, why are you here?”
She waited a beat too long before answering. “Because everyone’s worried about you.”
“That’s not why you left your children and flew across the world.”
“No,” she admitted. “It’s not. I need your help.”
“You could’ve called.”
“Would you have answered?” When he didn’t respond, she continued. “No, you wouldn’t have. You haven’t answered any of Regina’s calls. When was the last time you spoke to your mother?”
“She left a voicemail yesterday.” And she could’ve given him a heads-up that he’d soon have company. Leah must have already been on her way here when his mom left that message.
“Uh-huh, a voicemail. Did you call her back?”
He said nothing in response. He didn’t need to. They both knew the answer.
Jesus, why was she here, prodding him to go back to a place and a life he wasn’t sure he wanted anymore? His temper sparked at the thought. “I’ll pay for whatever repair
you need or school fee or—fuck, whatever you need help with. If you’ll just…leave me alone. That’s all I ask.”
“What, you’re going to throw money at us?”
“It’s all I have to give.” He turned away and scooped up his surfboard from the sand.
She huffed out a breath in disbelief. “Typical Marcus. The going gets tough, so you get going.”
What could he say to that? She was spot-on. It had always been his reaction to heavy emotional stress, and it had worked for him for thirty-four years. Why change it up
now?
“I can’t believe you,” she said with disgust. “You won’t even deny it.”
“There’s nothing to deny. You have me nailed down, Leah. I’m a coward. What else do you want me to say? I’m sorry? I’m not. I’m a drunk with enough baggage to fill a 747 and the sense of humor of a fifteen-year-old. I’m a fucking mess. You and your kids are better off without me around.”
“No.” She stormed after him and caught his arm. “Marcus Deangelo, you don’t get to do this again. You don’t get to walk away, to disappear and start over again. You broke Danny’s heart the last time you vanished on us.”
She aims, she scores.
Direct hit, straight through the heart. He flinched at the pain of it but jerked his arm free and kept walking.
Nearly six years ago, he’d made a bad call during a hostage negotiation that ended a young girl’s life. After that clusterfuck, he hadn’t been able to live with the guilt. He’d left the FBI and disappeared—came here, to his little slice of surf heaven. His mother hadn’t known where he was for a solid six months, and he’d told her then only because she’d threatened to set the world on fire looking for him. Regina Deangelo didn’t make empty threats.
But Danny, his best friend, and partner hadn’t known where he was for two long years until sheer boredom eventually drove him to return to the States and join HORNET. And wasn’t it just his luck that HORNET’s first mission intersected with one of Danny’s cases? After that,
Danny hadn’t given him a choice and dragged him back into the family fold.
But Leah wasn’t like Danny. She was fire and temper and wasn’t going to let him slink away to lick his wounds this time. In that moment, he hated her for it.
She dogged his heels. “You told me that Danny, with his dying breath, made you promise to take care of me and the kids.”
“By staying away, I am. You ever need anything all you have to do is call, but you don’t want me hanging around fucking things up for you.”
“Is that what you think Danny meant?”
“No, but it’s the best I can do.” He shoved his board into the sand by his front porch and spun to face her. “Because I know he sure as hell didn’t mean I should fuck you, and that was exactly where things were headed when I left.”
She flinched and took a step backward. Her arms folded tightly around her middle, pushing her breasts up under her flowing tank top. And he hated himself for noticing. What kind of man looked at his best friend’s widow like that?
After a moment, she released a long, slow breath. “That night, we were both drunk and crazy with grief. I was drowning and needed someone to hold on to. You were there. Convenient. We came to our senses before…”
“Doesn’t matter. We went too far, and I refuse to dishonor Danny like that. I won’t hurt him like that.”


Tears filled her eyes and spilled over. “Oh, Marcus. You can’t do anything to hurt him,” she said softly. “He’s dead.” 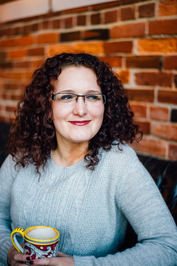 Tonya Burrows wrote her first romance at age 13 and hasn't put down her pen since. Originally from a small town in Western New York, she suffers from a bad case of wanderlust and usually ends up moving someplace new every few years. As of now, she lives in the Pacific Northwest with The Boyfriend, a diva Schnoodle, a plucky pug-mix, and #writercat.

When she's not writing about hunky military heroes, Tonya can usually be found kayaking, hiking, or road-tripping across the country. She also enjoys painting and B grade disaster movies.