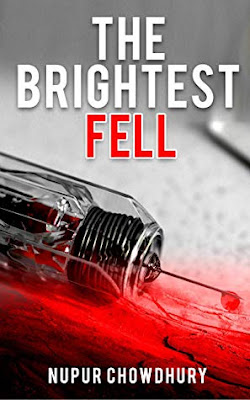 BLURB:
Fifteen years ago, Jehan Fasih designed a drug that could curb the instinct for violence (and rob the taker of their free will). Fifteen minutes ago, someone blew up the metro station to get their hands on his brainchild.

Jehan must make a decision, and time is running out.

Abhijat Shian and his sister Rito lost their jobs, and their family's reputation, over the course of a single week.
The reason? Their father's trusted protégé, Jehan Fasih, betrayed him and embroiled their family in one of the biggest corruption scandals the country has ever known.

The Shian siblings' quest for revenge soon turns into a murky web of confusing motives and divided loyalties.

Is Fasih a genius or a madman? Is their father truly innocent or is there a trail of deceit and betrayal within the hallways of their childhood home?


The Brightest Fell is an epic tale of loyalty, treason, corruption, patriotism, and political intrigue.


When nations are on the brink of war, to be innocent is not enough...

Fifteen years ago, Jehan Fasih designed a drug that could curb the instinct for violence (and rob the taker of their free will).


Fifteen minutes ago, someone blew up the metro station to get their hands on his brainchild.


Jehan must make a decision, and time is running out.


Deceit and blackmail dance with action and suspense in this complex thriller from Nupur Chowdhury. The Brightest Fell takes readers on a journey to a far-flung land rife with intrigue and suspense.
— Steve Quade, Indies Today

Jehan walked through the labyrinthine hallways of the Parliament House in a daze. Some of his colleagues at the Institute had offered to accompany him to the meeting, albeit halfheartedly, but he’d refused. He hadn’t asked their permission before he put this thing in motion; it wouldn’t be fair to drag them into it now that it was time to face the music.
Besides, he might need their help yet. No point in burning bridges he might soon need to cross. He’d incinerated enough of them already.
Jehan shook his head, trying to pull his mind out of the funk it seemed to be sinking into with every passing day. He hoped he looked presentable. Too much caffeine and too little sleep had taken their toll on his appearance; not that he had ever looked particularly healthy to begin with.
He could count on his fingers the number of hours he had slept in the past week, and Dileep kept telling him he was losing weight he couldn’t afford to lose. He was probably right. His favorite cardigan hung off him like the rags off a scarecrow, and he’d had to punch an extra hole in his belt so his trousers wouldn’t fall off.
Jehan clutched at his sleeves and pulled them down over his fingers. He needed to buy a pair of gloves. Was it colder than usual this year, or was he coming down with something? God, please let it be global warming wrecking the planet’s weather cycle. He couldn’t afford to be sick right now.
And then, his feet froze mid-step. Across the corridor, he could see Rajat step into the elevator hall and press the call button for one of the lifts.
For a few seconds, Jehan couldn’t make himself move. He stood there, biting his lip, feeling like a boy who’d been summoned to the principal’s office for hiding in the library during sports class. Every instinct told him to turn away and make a run for it.
Or to run to Rajat and apologize. Explain everything, and ask his mentor for the help and guidance he’d always so generously provided. Jehan didn’t think he had ever needed Rajat more than he did now.
The elevator pinged, a tinny voice announcing the floor. Jehan forced himself into a brisk walk, stepping into the lift just as the doors were about to close. He was panting, and he realized a moment later that his hands were shaking. He clenched them into fists and shoved them into his pockets.
When he finally looked up, Rajat was staring at him like he had seen a ghost.
Seconds passed and neither of them said a word. Jehan parted his lips, tried to make his tongue form a greeting. But there was a stone lodged in his throat and nothing came out but a broken gasp. Fuck. What was he doing? Why on earth had he thought it would be a good idea to get on this lift with Rajat?
At length, Rajat raised an eyebrow. Had he practiced that look in a mirror? Surely, it wasn’t possible to convey that much contempt and disgust with a single expression without considerable practice.
He forced himself to hold Rajat’s gaze, waiting for him to speak. Whatever he said, Jehan was sure he would have deserved it.
“Why?”
Jehan looked away. God, how he wished there’d been some curses and expletives attached to that question. Anything to distract from that sense of naked betrayal.
“You wouldn’t believe me if I told you.”
Rajat hit the little red emergency stop button so hard Jehan was vaguely surprised it didn’t break. “You’re right, I probably wouldn’t. Even I’m not stupid enough to believe the same lies over and over again. Or maybe I am. You’ve certainly proved to me that I’m far more gullible than I ever suspected.”
“Rajat–”
“Why are you here, Jehan?” The rage seemed to go out of Rajat almost as quickly as it had arrived, leaving behind a tired old man who looked like he had aged ten years in the few weeks since Jehan had seen him last. “Why did you board this lift? You could easily have gotten another one. What, you want to gloat about how clever you’ve been? Well, I’ll give you that. You were clever. And helpful, wittingly or otherwise. You exposed people in my own Cabinet that I’d never have suspected of being corrupt. I suppose I should thank you for that. But this game isn’t over yet, my boy,” he spat the words like they’d burned his tongue. “And the final scores might not be what you imagined.”
“I…” Jehan glanced down at his feet, trying to keep himself from fidgeting. “I just wanted to talk to you before…” he gave a half-shrug, glancing in the general direction of the east wing, where the meeting was to convene. “Before it all begins.”
Rajat laughed, but there was no humor in his voice. “It began when you called that press conference, Jehan. This is where it ends.” He pressed the red button again, restarting the lift. “I don’t know why you’re doing this, or who put you up to it. But you should know that I will find out, and I’ll never forget what you’ve done.”


The elevator grunted to a halt at their floor and the doors pinged open. Jehan stepped out, turned around, and forced himself to meet Rajat’s eyes one last time. “Then I hope a day will come when you’ll be able to exact your revenge, sir.” 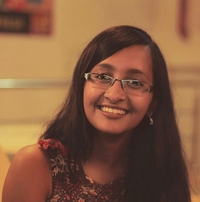 Nupur Chowdhury is the author of A Flight of Broken Wings and The Brightest Fell. Apart from novels, she enjoys writing poetry and the occasional short story. She was four when she started writing. Now, some 20 years later, it’s more an addiction than a hobby. Nupur likes coffee, street food, fanfiction, and sleep. She dislikes yogurt, slow internet, unnecessary cliffhangers, and being woken up in the morning. You can find her on Wattpad, Twitter, and Amazon. And if you can’t, it’s probably because she’s busy sleeping.
Posted by Reese's Reviews at 12:00 AM