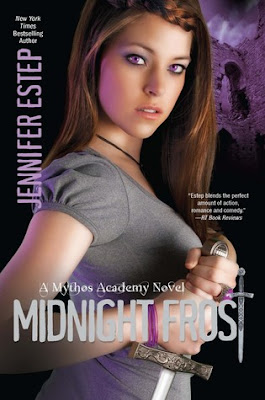 Just when it seems life at Mythos Academy can’t get any more dangerous, the Reapers of Chaos manage to prove me wrong. It was just a typical night at the Library of Antiquities — until a Reaper tried to poison me. The good news is I’m still alive and kicking. The bad news is the Reaper poisoned someone else instead.

As Nike’s Champion, everyone expects me to lead the charge against the Reapers, even though I’m still hurting over what happened with Spartan warrior Logan Quinn. I’ve got to get my hands on the antidote fast — otherwise, an innocent person will die. But the only known cure is hidden in some creepy ruins — and the Reapers are sure to be waiting for me there…

My Review:
Despite my deep and unending love for these books, I was so nervous about Midnight Frost. I love Logan’s character and while I understand why he felt he had to leave, everything inside me was screaming I couldn’t read a Mythos Academy book without Logan freaking Quinn. Oh, how wrong I was. Jennifer Estep kept Gwen and her friends so busy and in danger that Logan didn’t really need a huge role in this story to be important.

Gwen was working in the library when she saw someone poison hers and Nickamedes water. Trying to take down the Reaper she misses when Nickamedes takes a drink of the water and becomes poisoned. Trying to find a cure Gwen sets off to a different Mythos Academy to find the flower that can save him. Of course, it’s a trap by the Reapers, but Gwen will do anything to protect the ones she loves.

This book was so good. I was sad there wasn’t more Logan, but when he does show up he makes it worth every moment. I like that Gwen and Logan go through a lot of both normal and not normal stuff with their relationship. It sucks because I just want them to be happy together, but at the same time, it’s realistic because they both go through so much.

I am still amazed and how Jennifer Estep balances having so many amazing secondary characters with Gwen and they don’t make the story feel like there are too many characters. We also get to meet more Gods in this story which was so cool and I know they’ll play an important role in this story. I love that there are LGBTQA represented characters in these stories too. Makes this story more diverse.

Oh, and Gwen gets to ride freaking griffin’s! I mean holy smokes I was thinking the story was going that way, but seriously that scene was so cool. The imagery and everything in the story were just amazing and had me picturing the ride right along with Gwen.

I also enjoyed being at the different academy and seeing Gwen meet some of her family and realize who her father was. I wasn’t expecting her father’s story to be such a big aspect of this story, but it’s interesting how Gwen continues to find out about her world and who played a part in making her who she is today.

Loved this book from start to finish, I need to buy it for my shelves (shh don’t tell my husband). I can’t wait to read these books again and again. 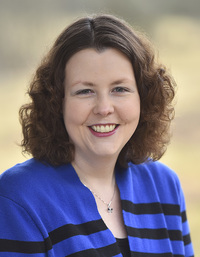 Jennifer Estep is a New York Times, USA Today, and international bestselling author, prowling the streets of her imagination in search of her next fantasy idea. She is the author of the following series:

THE ELEMENTAL ASSASSIN SERIES
The books focus on Gin Blanco, an assassin codenamed the Spider who can control the elements of Ice and Stone. When she’s not busy battling bad guys and righting wrongs, Gin runs a barbecue restaurant called the Pork Pit in the fictional Southern metropolis of Ashland. The city is also home to giants, dwarves, vampires, and elementals—Air, Fire, Ice, and Stone.

THE CROWN OF SHARDS SERIES
The books focus on Everleigh Blair, a member of the royal family who is distantly in line for the throne of Bellona, a kingdom steeped in gladiator tradition. But when the unthinkable happens, Evie finds herself fighting for her life—both inside and outside the gladiator arena.

THE MYTHOS ACADEMY SPINOFF SERIES
The books focus on Rory Forseti, a 17-year-old Spartan girl who attends the Colorado branch of Mythos Academy. Rory’s parents were Reapers, which makes her the most hated girl at school. But with a new group of Reapers and mythological monsters on the rise, Rory is the only one who can save her academy.

THE MYTHOS ACADEMY SERIES
The books focus on Gwen Frost, a 17-year-old Gypsy girl who has the gift of psychometry, or the ability to know an object’s history just by touching it. After a serious freak-out with her magic, Gwen is shipped off to Mythos Academy, a school for the descendants of ancient warriors like Spartans, Valkyries, Amazons, and more.

THE BIGTIME SERIES
The books take place in Bigtime, New York, a city that’s full of heroic superheroes, evil supervillains, and other fun, zany, larger-than-life characters. Each book focuses on a different heroine as she navigates through the city’s heroes and villains and their various battles.

THE BLACK BLADE SERIES
The books focus on Lila Merriweather, a 17-year-old thief who lives in Cloudburst Falls, West Virginia, a town dubbed “the most magical place in America.” Lila does her best to stay off the grid and avoid the Families—or mobs—who control much of the town. But when she saves a member of the Sinclair Family during an attack, Lila finds herself caught in the middle of a brewing war between the Sinclairs and the Draconis, the two most powerful Families in town.