Today we have the pre-release blitz of Susan Mesler-Evans Most Ardently! Check it out and be sure to grab your copy today! 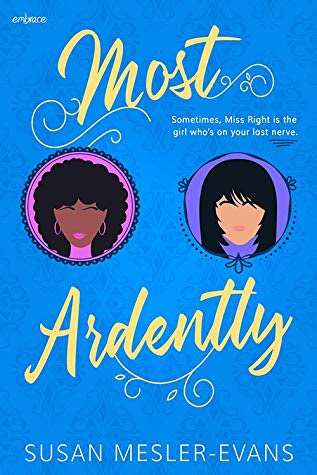 Elisa Benitez is proud of who she is, from her bitingly sarcastic remarks to her love of both pretty boys and pretty girls. If someone doesn’t like her, that’s their problem, and Elisa couldn’t care less. Particularly if that person is Darcy Fitzgerald, a snobby, socially awkward heiress with an attitude problem and more money than she knows what to do with.

From the moment they meet, Elisa and Darcy are at each other’s throats -- which is a bit unfortunate, since Darcy’s best friend is dating Elisa’s sister. It quickly becomes clear that fate intends to throw the two of them together, whether they like it or not. As hers and Darcy’s lives become more and more entwined, Elisa’s once-dull world quickly spirals into chaos in this story of pride, prejudice, and finding love with the people you least expect. 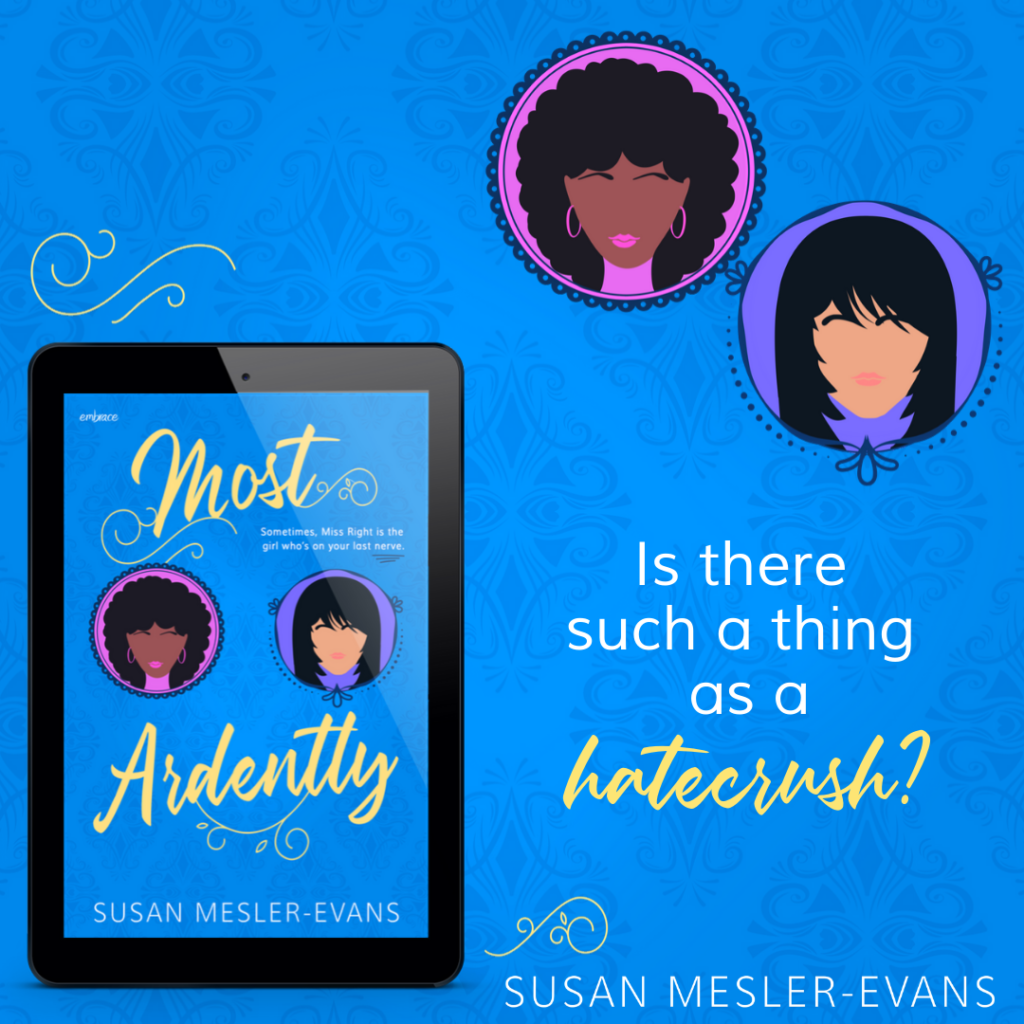 While Elisa waited at a table in the food court for Julieta to return with their pretzels, she decided that, yes, she was desperate enough to do this. The food court was mobbed, which would hopefully buy her enough time to make the call before she got back. Three text messages to Willow later, she had the phone number she needed.
She took a deep breath, before swallowing her pride, and dialing the number.
“Hello, Darcy Fitzgerald speaking.”
Elisa’s next words were out before she even had a chance to consider them.
“What the hell is wrong with Bobby?”
There was a confused pause on the other end, before, “Should I start with his appearance or his personality, or…?” Then, suddenly, realization set in. “Elisa?”
“Listen, my sister and I just popped over to Bobby’s house to pay him a visit, and he’s up and vanished with no explanation. So you’re gonna explain for him. Why the hell has Bobby just run off to Cape Cod? In January.”
“Cape Cod is actually quite lovely in the winter.”
“Darcy, I swear to God.”
There was a pause long enough that she briefly wondered if she’d been hung upon. Finally, Darcy spoke. “Something came up, that’s all.”
“You’re a shitty liar,” she said. “Listen, I’ve checked all of Bobby’s social media, and he hasn’t said a word about leaving Steventon, much less about going to Massachusetts. You know what that makes me think?”
“Oh, pray tell,” she droned.
“I think he didn’t just not tell Julieta he was leaving. He was making sure she wouldn’t know. He must’ve known she’d catch on eventually, but thanks to his little media blackout, she didn’t figure it out until he was too far away for her to strangle him.”
“Don’t be so dramatic,” Darcy said. “He just realized he has obligations elsewhere.”
“Give me one good reason why I shouldn’t drive up to Cape Cod and kick his ass.”
“Well, for one thing, his home up there has an extensive security system. For another, he’s quite a bit taller than you, and probably in much better physical shape—”

Elisa groaned. “Stop holding out on me and tell me what happened.”
“I told you. Bobby realized he had obligations outside of Steventon, and your sister. It’s nothing personal.”
“He left a girl he’s been dating for months without even saying ‘see ya.’ How in the hell is that not personal?”
“Believe what you want,” she said. Elisa could almost see her condescending scowl.
“You know something, don’t you?”
“Even if I did, I wouldn’t be at liberty to reveal it.”
“Just tell me why he left,” Elisa snapped, exasperation causing her voice to squeak a bit.
“Obligations. That’s all I’ll say.”
She ran a hand through her hair. “What about you? Where’d you run off to? You have ‘obligations,’ too?”
“No,” she said. “I’m just back home in Columbus. You are welcome to come and visit if you’re ever in the area. There’s always a guest room available to you.”
Elisa took a deep breath to force herself to keep her temper. “Yeah. Great. Thanks. Bye,” was all she could bring herself to say before hanging up on her.
She slammed her phone on the table, slumping back in her chair. Well, that had been a dead end. She was certain Darcy knew more than she’d let on, but she was also certain it wouldn’t do any good to keep asking.
She forced herself to hide her anger as Julieta approached, a tray of food in her hands. Things were already miserable enough. It wouldn’t do any good to stew.

Susan Mesler-Evans is a writer, college student, D&D enthusiast, theatre nerd, and horrific procrastinator. Born and raised in Columbus, Ohio, Susan now lives in Florida, and can often be found reading, scrolling through Tumblr until 2 AM, overanalyzing her favorite fictional characters and relationships, binge-watching comedies on Netflix, thinking about writing, and even, on occasion, actually writing. Most Ardently is her first full-length novel. You can find her at susanmeslerevanswrites.com. 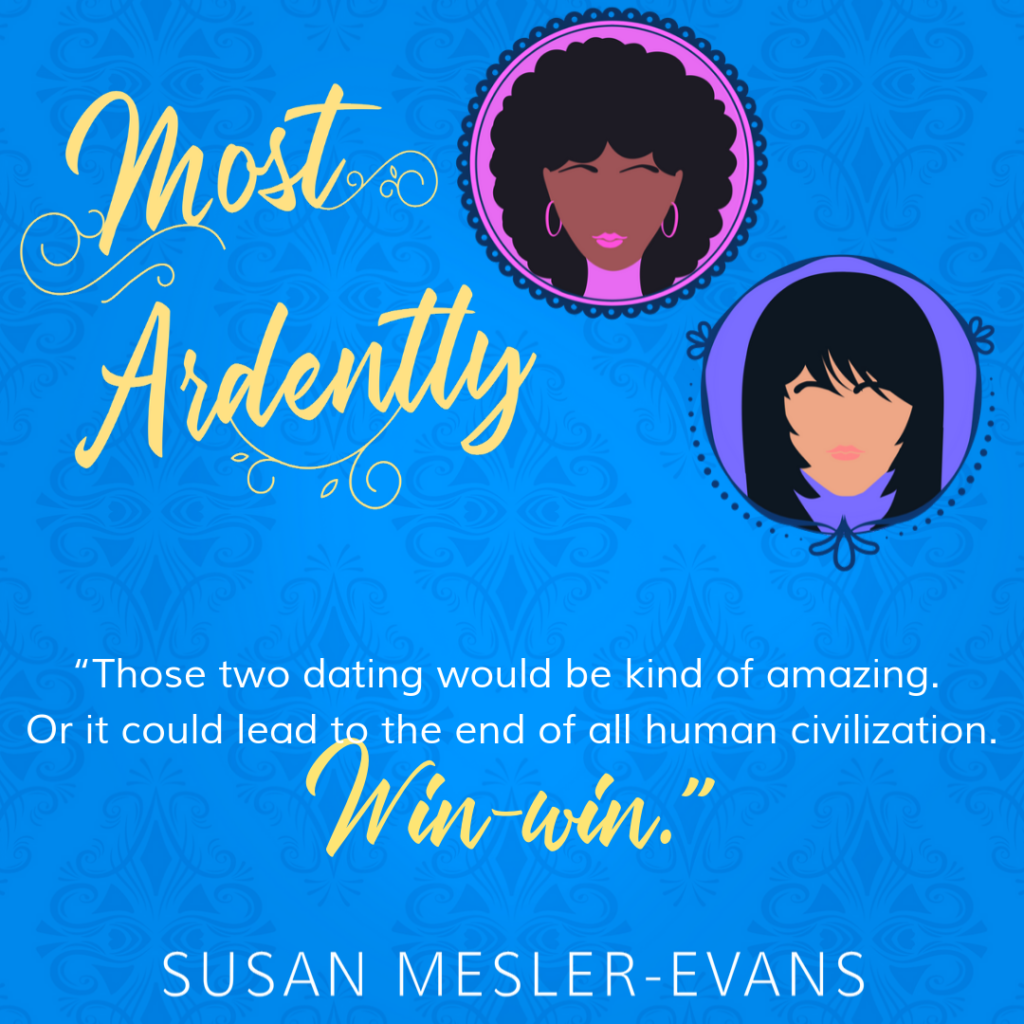