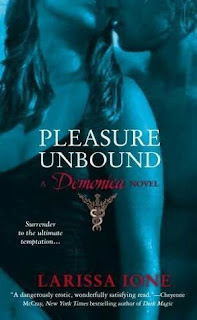 
Blurb:
In a place where ecstasy can cost you your life...

She's a demon-slayer who hungers for sensual pleasure-but fears it will always be denied her. Until Tayla Mancuso lands in a hospital run by demons in disguise, and the head doctor, Eidolon, makes her body burn with unshakable desire. But to prove her ultimate loyalty to her peers, she must betray the surgeon who saved her life.

Two lovers will dare to risk all.

Eidolon cannot resist this fiery, dangerous woman who fills him with both rage and passion. Not only is she his avowed enemy, but she could very well be the hunter who has been preying upon his people. Torn between his need for the truth and his quest to find his perfect mate before a horrific transformation claims him forever, Eidolon will dare the unthinkable-and let Tayla possess him, body and soul . . .


My Review:
I recently discovered My Media Mall which is attached to my library card and I can check out library e-books. Pleasure Unbound has been on my TBR pile since 2012 so about five years now, and I wanted to finally check some of these long-lived TBR pilers off my shelf. When I found, Pleasure Unbound I grabbed and when I started reading holy smokes with his book good. Larissa Ione at this point was a new author to me. I had heard of her amazingness but hadn’t read any of her books. I can definitely see now why she’s a big deal.

Tayla Mancuso saw her mother being brutally murdered by a demon and has since spent his life trying to track down and kill as many as she can. Then her body starts having problems and she begins to lose control of her body, which sadly is how one of her partners gets killed and how she ends up being treated in a demon hospital. Eidolon cares a lot for the demons he treats and when a demon hunter ends up in his hospital he’s expecting to hate her on-site. Instead, they end up having sex in her hospital room on the wall. Oops. Now he’s intrigued by her and she’s supposed to do everything in her power to take the hospital down. To top it all off people in the hospital are going missing and being carved up like lunch meat and harvested for their parts, and Tayla thinks the hunters may be behind it.

Tayla and I had a bit of a love-hate relationship. At times, I was like “come on seriously you need to accept who you are” and other times I totally understood where she was coming from. I mean she’s a complete badass who has had a lot of bad stuff happen to her that left her damaged, but it only made her stronger I think. I love how she doesn’t put up with Eidolon’s crap, but she also takes care of him when he needs her.

Eidolon I liked throughout the story. He cares so much for his brothers and he’s an all-around good guy. I loved how he was with Tayla and he looked out for her even when she indicated she didn’t want his time and time again. He’s super sweet.

Definitely will be checking out the other books in this series soon. There are so many so it’s a tad intimidating, but I seriously want to know what will happen next. 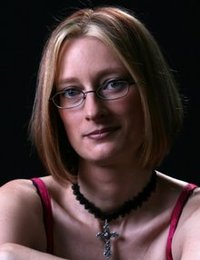 New York Times and USA Today bestselling author Larissa Ione penned her first novel at the age of 13 and hasn't stopped writing since. She has been a U.S. Air Force meteorologist, an EMT, and a professional dog trainer, and you never know when one of those interests will pop into her novels. She lives a nomadic existence with her U.S. Coast Guard husband and son, so her writing career has been a blessing -- a job that moves easily. She writes dark paranormal romance for Grand Central Publishing (formerly Warner Books,) and contemporary romance for Red Sage and Samhain. Under the pen name Sydney Croft, she writes erotic action-adventure romance with partner Stephanie Tyler.