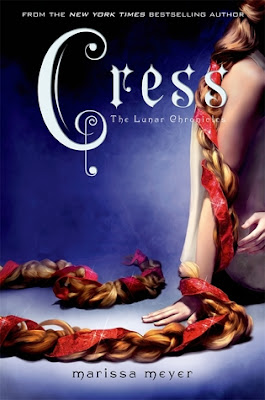 Blurb:
In this third book in the Lunar Chronicles, Cinder and Captain Thorne are fugitives on the run, now with Scarlet and Wolf in tow. Together, they're plotting to overthrow Queen Levana and her army.

Their best hope lies with Cress, a girl imprisoned on a satellite since childhood who's only ever had her netscreens as company. All that screen time has made Cress an excellent hacker. Unfortunately, she's just received orders from Levana to track down Cinder and her handsome accomplice.

When a daring rescue of Cress goes awry, the group is separated. Cress finally has her freedom, but it comes at a higher price. Meanwhile, Queen Levana will let nothing prevent her marriage to Emperor Kai. Cress, Scarlet, and Cinder may not have signed up to save the world, but they may be the only hope the world has.


My Review:
ABSOLUTELY LOVED THIS BOOK! Read in one sitting, it is amazing. I am not a huge fairy tale retelling fan, but I love the Lunar Chronicles. Marissa Meyer has put such a unique spin on these stories, I can’t help but love them.

Cress is the story of Rapunzel if you couldn’t tell from the cover. Cress is a Lunar Shell meaning she has no powers or abilities and is susceptible to Lunar powers and abilities, much like a human. Cress has been locked away in a satellite for eight years with only the Lunar Queens henchman to visit her. She’s never been able to escape and has been spying on Earth for the Lunar Queen for almost a decade. When Cinder and her team reach out to Cress she thinks she’ll finally be free, but things are never that simple. At the last minute, Levana’s henchman comes for a surprise visit and everyone ends up in trouble and separated.

Okay, again I can’t give too much away here so I won’t go into what happens after the group becomes separated. The characters are so amazing and well developed in this story. Of course, the new character we get is Cress who surprisingly has a huge tie to some of the other characters in this story. I love how each character struggles with who and what they’re supposed to be and how to move past the obstacles in their way.

Cress is our new character who is Lunar and has been stuck in a satellite for the majority of her life. Freedom is all she’s ever wanted. I liked Cress, she’s very different from our other two main characters Cinder and Scarlet. Cinder and Scarlet have been through a lot and have come out tougher on the other side and continue to do so. Cress is an innocent who hasn’t experiences much since her birth when her parents gave her away for being a Shell. Her first time on earth is hard and difficult but she becomes stronger with each struggle. Cress is also shy and adorable in a lot of ways that our other characters aren’t. She’s also super in love with Captain Thorne although he has no idea and doesn’t think he’s worthy.

Cress was amazing. I’m kind of kicking myself a little for not picking these books up earlier. So glad I finally did, and with all the books out I can more or less binge when I can get my hands on the next couple books.

Love this series, the writing, and this story. Cress is a great addition to this amazing series and I can’t wait to continue! 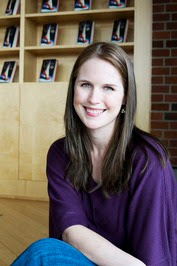 One of my first spoken words was “story” (right along with “bath” and “cookie”), my favorite toy as an infant was a soft, squishable book, and I’ve wanted to be a writer since I first realized such a job existed.

When I was fourteen my best friend introduced me to anime and fanfiction—over the years I would complete over forty Sailor Moon fanfics under the penname Alicia Blade. Those so inclined can still find my first stories at fanfiction.net. Writing fanfic turned out to be awesome fun and brought me in contact with an amazing group of fanfiction readers and writers. As Alicia Blade, I also had a novelette, “The Phantom of Linkshire Manor,” published in the gothic romance anthology Bound in Skin (CatsCurious Press, 2007).

When I was sixteen I worked at The Old Spaghetti Factory in Tacoma, Washington, affectionately termed “The Spag.” (Random factoid: This is also the restaurant where my parents met some 25 years before.) I attended Pacific Lutheran University where I sorted mail that came to the dorm, carted tables and chairs around campus, and took writing classes, eventually earning a Bachelor’s degree in Creative Writing and Children’s Literature. Knowing I wanted a career in books, I would also go on to receive a Master’s degree in Publishing from Pace University (which you can learn more about here). After graduation, I worked as an editor in Seattle for a while before becoming a freelance typesetter and proofreader.

Then, day of days, someone thought it would be a good idea to give me a book deal, so I became a full-time writer. CINDER was my first completed novel, though I have an adorable collection of unfinished ones lying around, too.

I married my husband in 2011, two months before the release of Cinder, and we adopted our two beautiful twin daughters, Sloane and Delaney, in 2015. Reading lots and lots of bedtime stories is most definitely a new favorite pastime.