Cindi Madsen's JUST ONE OF THE GROOMSMEN blog tour 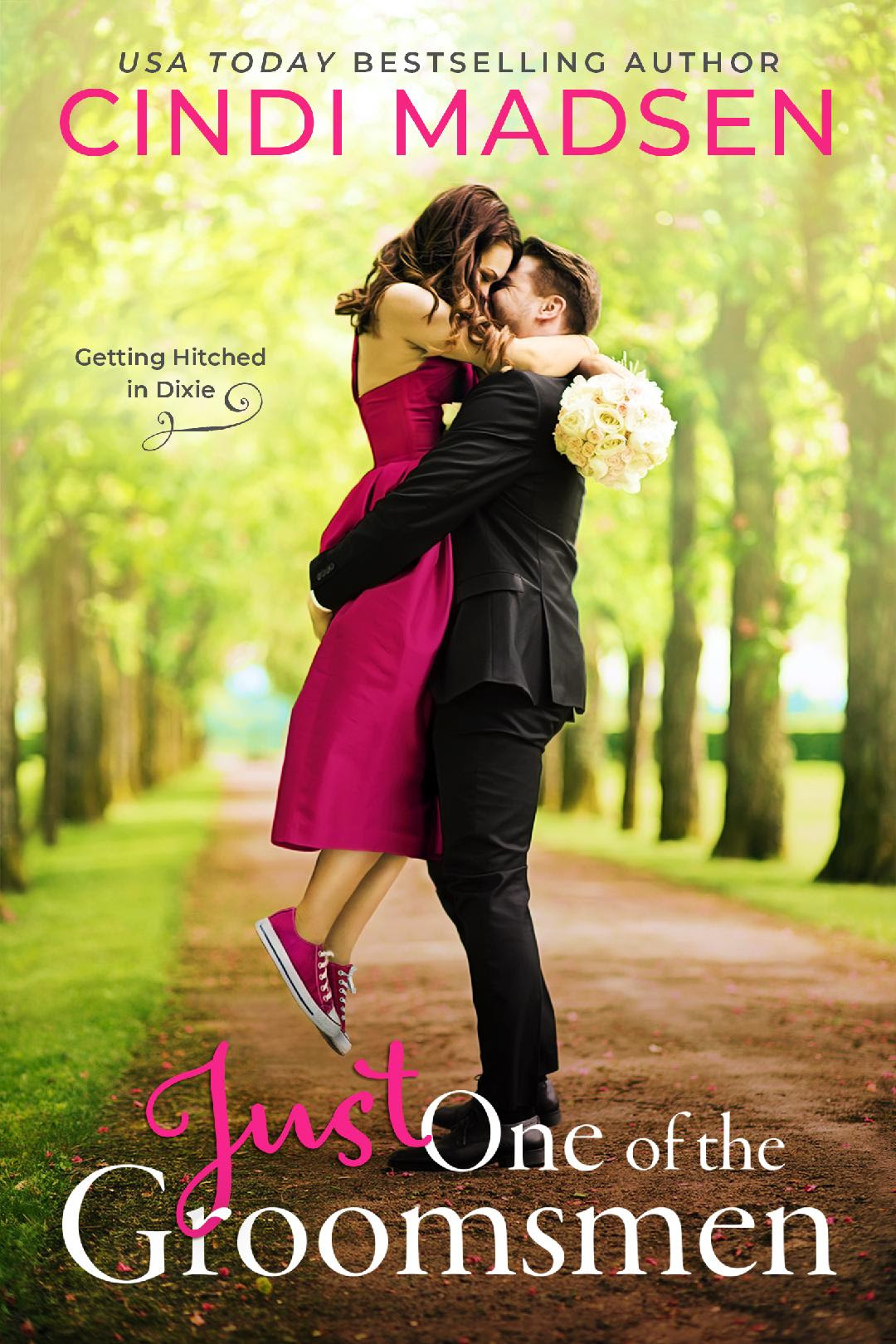 Addison Murphy is the funny friend, the girl you grab a beer with—the girl voted most likely to start her own sweatshirt line. And now that one of her best guy friends is getting married, she’ll add “groomsman” to that list, too. She’ll get through this wedding if it’s the last thing she does. Just don’t ask her to dive for any bouquet.

When Tucker Crawford returns to his small hometown, he expects to see the same old people feel comfort in the same old things. He certainly doesn’t expect to see the nice pair of bare legs sticking out from under the hood of a broken-down car. Certainly doesn’t expect to feel his heart beat faster when he realizes they belong to one of his best friends.

If he convinces Addie to give him a chance, they could be electric…or their break-up could split their tight-knit group in two.

Hiding the way he feels from the guys through bachelor parties, cake tastings, and rehearsals are one thing. But just as Tucker realizes that Addie truly could be the perfect woman for him—he was just too stupid to realize it—now she’s leaving to follow her own dreams. He’s going to need to do a lot of compromising if he’s going to convince her to take a shot at forever with him—on her terms this time.


My Review:
Just One of the Groomsmen was a very fun book. I was captured from the first couple of pages and read this in one sitting. This is my first exposure to one of Cindi Madsen's books, but it will most definitely not be the last.

Addison Murphy aka Addie aka Murph has been best friends with her group of guys since grade school. She can't imagine her life without them. When she's asked to be one of the groomsmen for her friend Sheps' wedding she couldn't be more excited. The downside? She has to wear a dress. When Tucker moves back into town, Addie's feelings start to change.

After hearing about one of his best-friends upcoming nuptials, Tucker quits his job, sick of living in the city and wanting to be closer to his friends. When he's moving back in town and sees his best friend, Addie, in a dress he can't seem to see her as just his best friend anymore.

I enjoyed this story very much. It was very fun. Addie was a relatable and fun character. I liked watching her grow as a character and learn about how such a strong character also dealt with feeling inadequate.

Tucker was a fun character as well. I enjoyed how he struggled with who his family wanted him to be, with who he wanted to be. I enjoyed his transition into small-town life again and finding himself.

The relationship between Tucker and Addie was very fun to read about. Both when they were "just friends" and when they became closer. The sexy scenes were swoon-worthy and in need of a fan (HOTT!!!) 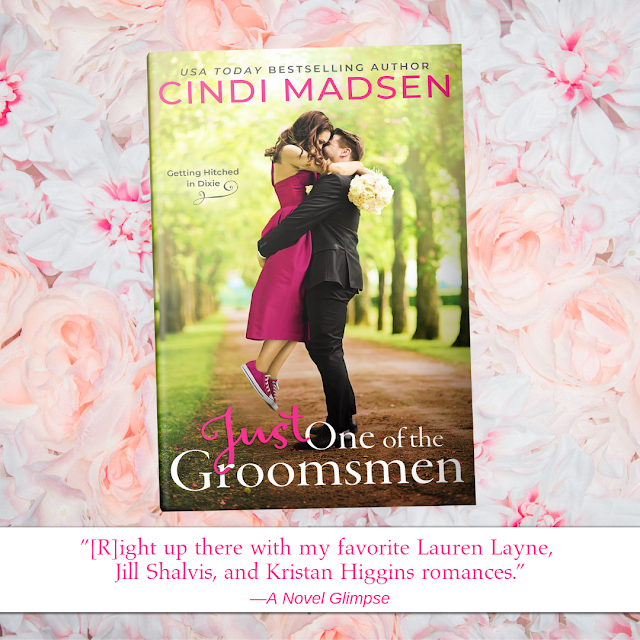 Excerpt
Tucker cautiously wrapped his arm around her shoulders, and when she didn’t shove him off, the way she’d done a few times back in the day when he’d dared to console her, he curled her closer. “Don’t worry. I’ll take it to the grave.”

“I’m not sure I can chance that. I might have to push you off the back of the boat now.”

“Maybe the gators will get to you first,” she quipped, only then she tucked her feet up, like she’d remembered there might be a few of the toothy beasts slumbering in the water, despite the fact that they rarely saw any on this side of the shore. She swiped a tear off her cheek and sniffed. “I hate feeling weak. Hate feeling like a girl. Even though I’m apparently not one.”

“You’re not weak. I’ve seen grown men cry in my office, so I don’t think it’s a girl or guy thing.”

“I notice you didn’t admit to crying yourself.”

He puffed out his chest. “Well, that’s because I’m far too macho.” The last few times he’d gotten choked up had been over his dog having to be put down, his grandfather passing away, and—even though he’d done his damnedest to hide it—the day he’d said goodbye to his friends before leaving town.

The girl at his side was there for all those instances, but his conflicting feelings for her made it hard to admit to ever being anything but strong. Like not saying it aloud would make her forget bike wrecks and scraped knees that’d brought tears, the times in his life he hadn’t stood up for other people when he should’ve, or any other time he’d been less than strong.

Just do it, Crawford. Find a way to make her feel better, the way she always did for you.

“There were cases, ones where I was fighting for a worthy cause, or for someone who truly deserved a break, and it didn’t matter how much research I put in, or how hard I fought, I’d still lose ’em. That made me feel weak and helpless.” Those “cases were why he’d originally chosen law, but they’d been so few and far between. “So did the cases where we had to defend people knowing full well they were guilty.”

He gazed out over the lake, unable to look at her as he admitted the next part. “I missed home and all of you guys, but I quit over more than that, and more than the long hours.” His fingers drifted down her arm, and her face tipped up, but he kept his eyes on the rippling reflection of the moon in the inky black water. “One guy walked on a stupid technicality because of something I’d found in the police report—some procedure the cop didn’t follow. Everyone at the firm was celebrating, and I was sick over it. The guy deserved to go to jail, and no amount of money seemed worth ignoring that fact. It was the final straw.”

Addie covered the hand he had on her arm with hers. “Most people wouldn’t have been able to walk away from the money.”

“I don’t know about that. Half the time I still think I was an idiot to quit like that with no backup.”

“If it makes you feel any better, I’m glad you’re here.”

He met her big brown eyes and smiled. “It does.”

“I’m sorry you were so unhappy. I should’ve checked in more.”

“I should’ve told you that I was struggling with my job. But that’s neither here nor there. Now I’m on a different path, and all’s I’m saying is, it’s not weak to care about things. You’re not a robot.” He renewed the drag of his fingers on her arm, and her chin lifted another inch or so, some of the sorrow fading from her features. He tried not to think about how close her lips were to his, how he felt each one of his heartbeats, and how having her tucked against him made his entire body hum. Despite knowing better, he couldn’t help the words that slipped out, or that his dipped when he said them. “It also hasn’t escaped my notice that you’re a girl.” 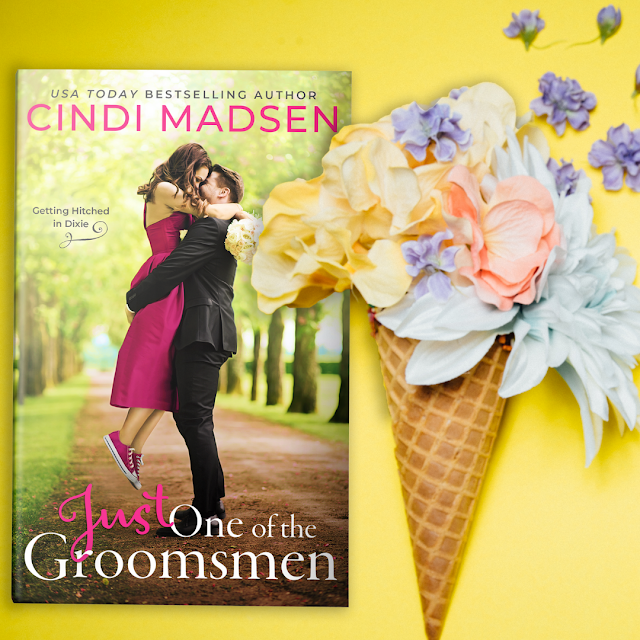 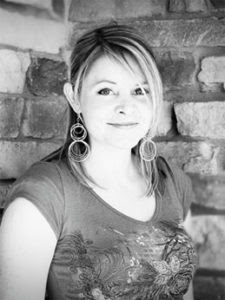 Cindi Madsen is a USA Today Bestselling author of contemporary romance and young adult novels. She sits at her computer every chance she gets, plotting revising, and falling in love with her characters. Sometimes it makes her a crazy person. Without it, she’d be even crazier. She has way too many shoes, but can always find a reason to buy a new pretty pair, especially if they’re sparkly, colorful, or super tall. She loves music, dancing, and wishes summer lasted all year long. She lives in Colorado (where summer is most definitely NOT all year long) with her husband and three children.