Blog Tour: GETTING HOT WITH THE SCOT by Melonie Johnson 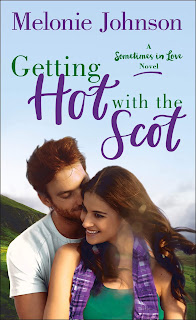 ABOUT THE BOOK:
The first in a new series, a journalist focused on her career and a sexy Scottish comedian turn a one night stand into forever.

Cassie Crow leaves for a vacation with two goals: fill up her empty charm bracelet and have a one night stand. For once, she wants to have fun instead of obsessively checking her work email. And kissing a man in a castle who’s dressed as a Scottish Highlander is the perfect solution.

Except when that man turns out to be Logan Reid, the host of a popular sketch show—and Cassie has just been roped into his latest prank. She wants nothing to do with his antics, but that was a really great kiss, and one night together couldn’t hurt.

It’s clear that one night isn’t enough and when Logan’s show brings him closer to Cassie, they decide to give dating a try. Can the woman who’s focused solely on her career and the man who refuses to take life seriously make it work?


Excerpt:
Would you look at that? The man is wearing a kilt.
Note to self: Cassie Crow—be careful what you wish for.
The man groaned again and raised a hand to shield his eyes from the sunlight now cutting across the hidden al- cove.
“Are you all right?”
“I will be fine once ye douse that blasted light.” He squinted up at her. “Be ye a new chambermaid?”
Chambermaid? She eyed the wide sleeves and open neck of the old-fashioned piratey shirt he wore. “Not sure what kind of weird-ass stuff you’re into buddy, but I don’t do RPG.”
“Weird . . . ass?” His dark red brows drew together as he shaped his mouth around the letters. “Are pee gee?”
“Role playing games. You know, like cosplay or what- ever.” She pointed at him. “Look, you’re the one wearing that get-up and talking like a reject from Macbeth.”
He narrowed his eyes at her finger. “Be ye a witch?” “What did you call me?”
With another groan, he lurched forward. Oh God, what if he was hurt? For all she knew he was a member of some

historic castle tour who got lost in a back passageway and hit his head. She leaned down to inspect him for bruises.
He threw a hand out, palm up, warding her off. “Back away, sorceress,” he hissed.
“Seriously?” She slapped his hand out of the way. “Here, let me help you out of there.” Cassie tugged gently on his shoulder. The voluminous shirt was loose, but she could feel—and appreciate—the thick spread of muscle beneath the soft fabric.
Just my luck, I finally run into a hot Highlander, and he’s delusional.
The man waved off her assistance and struggled to his feet, shaking a wild tousle of thick, red hair out of his eyes. Cassie never fancied herself to be a ginger girl, but it worked on him . . . or maybe that was the kilt talking. She eyed the swath of plaid fabric wrapped around his hips and wondered, like any female in her position would, what might or might not be under there. Reluctantly, she raised her gaze and caught him scrutinizing her in return.
“What be these strange breeks ye wear?” he asked, moving in a circle around her.
Cassie swore she could feel the weight of each of his eyeballs resting on her denim-clad backside. Fair enough. After a prolonged moment, she glanced over her shoulder. “Get a good look?”
“Aye.” He swallowed. “’Tis most unseemly, lass.” He shook his head, gaze still glued to her ass.
“They’re called jeans.” She pivoted to face him. “Are you for real?”
He met her gaze, his answer falling from his lips in a deep, rich brogue with trilling r’s that curled her toes, “Aye, lass, I’m real.”
Cassie’s heart hiccupped. Of course he’s real. Unless

those shots were stronger than I thought. “Were you at the whisky tasting?”
“Whisky?” His green-gold eyes lit with interest. “Do ye have whisky for me, then? I could use a wee dram. Be a good lass and fetch it for me.”
“Ha! I think you’ve had enough, mister. Is that how you ended up stuck in there?” Even as she said this, Cassie doubted it. She didn’t smell a hint of alcohol on him, though she did pick up other pleasant smells. Mint and clove and man and . . . Stop being ridiculous.
His broad shoulders lifted and dropped. “I dinna ken.” “How long were you in there?”
Another shrug.
Cassie dragged her attention away from the wide curve of his shoulders and leaned past him, inspecting the dark, narrow space behind the bookshelf.
He grabbed her wrist and pulled her back, panic edg- ing his voice. “Nay, lass. Doona be going in there.”
“Why not?” She inched forward and tried to get a bet- ter look.
“It canna be safe.” He tugged on her wrist again, his fingers warm and firm.
Tiny butterflies danced along the path where his skin touched hers. She brushed away the tingling sensation and slipped out of his grip, careful not to snag her bracelet. “Well, you were in there, and you appear to have man- aged.”
“Are ye daft, wench? I was trapped!”
She sniffed, not sure she liked being referred to as a wench, and frowned up at him. “What’s the last thing you remember?”
He closed his eyes and slumped against the shelf. “I canna recall anything afore the moment I woke to find my-

self crammed within yonder wall.” He blinked and fo- cused intently on her. “The moment I found you, lass.”
Cassie decided she liked being called lass much better than wench, especially when he was looking at her like that. Gazes locked, her other senses sharpened, heighten- ing her awareness of his body and its proximity to hers. She cleared her throat. “Hm. I think it’d be more accurate to say I’m the one who found you.” Telling herself she was only searching for injuries, she reached up and tentatively skimmed her palms along his temples, her fingers trailing his scalp.
“Looking for devil’s horns?” The man cocked one wicked brow at her as he raised his arms to mirror her movements, running his hands over her head and shoul- ders before brushing his palms down her back. “Ye’ve naught got any fairy wings, so I’d say we’re even. In fact,” he whispered against her hair, standing so close the low burr of his voice became a purr in her own chest, “ye feel perfect to me.”
Like the migrating monarchs her dad studied, the but- terflies made a return trip, enveloping her in a fluttery haze. She shivered. Whether it was the Scot or the scotch or both, Cassie didn’t care. He was here and she was here, and damn it all, it was about time she skipped to the good stuff. With a forceful mental click, Cassie turned off her brain, tilted her chin up, and caught his mouth with hers.
He made a low sound in the back of his throat, of pro- test or surprise, she wasn’t sure. But then his hands settled at her waist, and he returned the kiss. His mouth was somehow soft and hard at the same time, and when he slipped his tongue between her lips, she felt more light- headed than if she’d downed every shot of whisky that had been on that tasting list.

Cassie rolled her tongue against his, savoring the deli- cious contact. He met her thrust for thrust, deepening the kiss until she was swept away on a tidal wave of desire. This. This is what I’ve been waiting for. She clung to him, hands gripping his shoulders, swimming in sensa- tion, drowning in it. 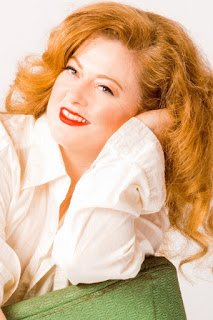 ABOUT THE AUTHOR:
A Star Wars junkie and Shakespeare groupie who quotes both Yoda and the Bard with equal aplomb, award-winning author Melonie Johnson—aka #thewritinglush—is a two-time RWA Golden Heart® finalist who loves dark coffee, cheap wine, and expensive beer. And margaritas. And mimosas. And mules. Basically, any cocktail that starts with the letter m. She met her future husband in that most romantic of places—the mall—when they were teenagers working in stores across the hall from each other. They went on to live happily ever after in the suburbs of Chicago with two redhead daughters, a dog that’s more like a small horse, and a trio of hermit crabs. After earning her Bachelor of Arts magna cum laude from Loyola University Chicago, Melonie taught high school English and Theatre in the northern Chicago suburbs for several years. Now she writes smart and funny contemporary romance and moonlights as an audiobook narrator under the pseudonym, Evelyn Eibhlin.