From the New York Times, bestselling author Jay Crownover comes DOWNFALL, a sexy, standalone contemporary romance! Check out all the stops on the tour, and grab your copy today, or read in Amazon KU! 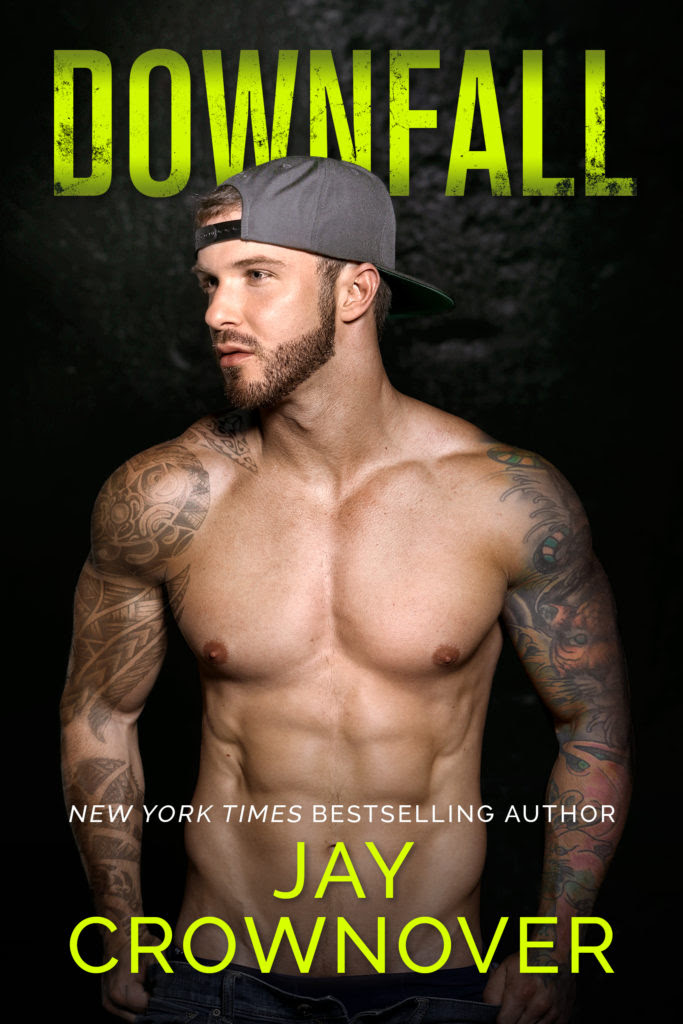 Solomon Sanders doesn’t have time to fall in love. Until a stunning, skittish, single mother forces him to pause and recognize just how empty and hollow his busy life has become.


From the start, it’s been ingrained in Solo’s DNA to fight.


Fight for what he believes is right.


Fight for the people he loves.


Fight for the traces of good in a place which tends to be filled with a variety of bad.


Fight for survival, so at some point, his life will quiet down and find a normal pace.


He wasn’t ready for the impact his secretive, shy, obviously out of place new neighbor was going to have on him. And never in a million years was he prepared to fall head over heels for her and her young daughter.


Now, he’s facing the most important, and the hardest fight he’s ever fought… the battle to win Orley’s damaged heart.


Orley Vincent’s heart is full of fear, leaving no space for love. Until a big, brash, brawler of a man forces his way in and makes her realize facing her fears is the only way she can ever be free.


From the start, Orley was groomed to believe she wasn’t good enough.


She wasn’t the perfect daughter. Or student. Or girlfriend.


But, she has always been the best mother she could be to her daughter, Noble.


Keeping Noble safe has always been the one thing she was determined to do, which ironically, is how she ended up on the wrong side of the tracks, living next door to an unlikely hero. Orley’s a woman on the run. She had no idea her frantic sprint was going to land her in the tattooed arms of a man ready to teach her how to fight for herself… and for love.


DOWNFALL is now available in KU!

My Review:
I started reading Downfall in Jay Crownover's monthly newsletters. I stopped about midway because I wanted to read the story all through. When I got a reviewers copy of the book with the beautiful swoon-worthy cover I knew I'd made the right choice.

Downfall is set in The Point, which if you haven't heard of, you are seriously missing out on some amazingness. Getting to see past characters again just had me so giddy.

Orley left everything behind to take care of her daughter. The money, the power, and her family. All of it. She knew her daughter would never be safe and so she escaped into the city, to The Point, where she is now hiding for the one person who wants her daughter. Orley never expected to find a place in the crime-infested place or to find love, but hunky neighbor and Solo keeps coming to her rescue.

Solo is doing everything he can to stay clean in a city of crime and filth. Solo doesn't have time for love and to be taking care of beautiful Orley and her daughter. When a fight goes wrong and he finds out Orley needs him, he'll do everything, including owing the most dangerous men in the city to keep Orley and her daughter safe.

Loved this story from start to finish. This story made me wanting to re-read the entire Point series and wanting more of their story than ever.

Downfall is amazing. The perfect addition to The Point world and I couldn't be more excited to see more stories that bring these characters close to us again. I loved this and if you enjoy any type of Jay Crownover book, you'll definitely want this book in your collection. 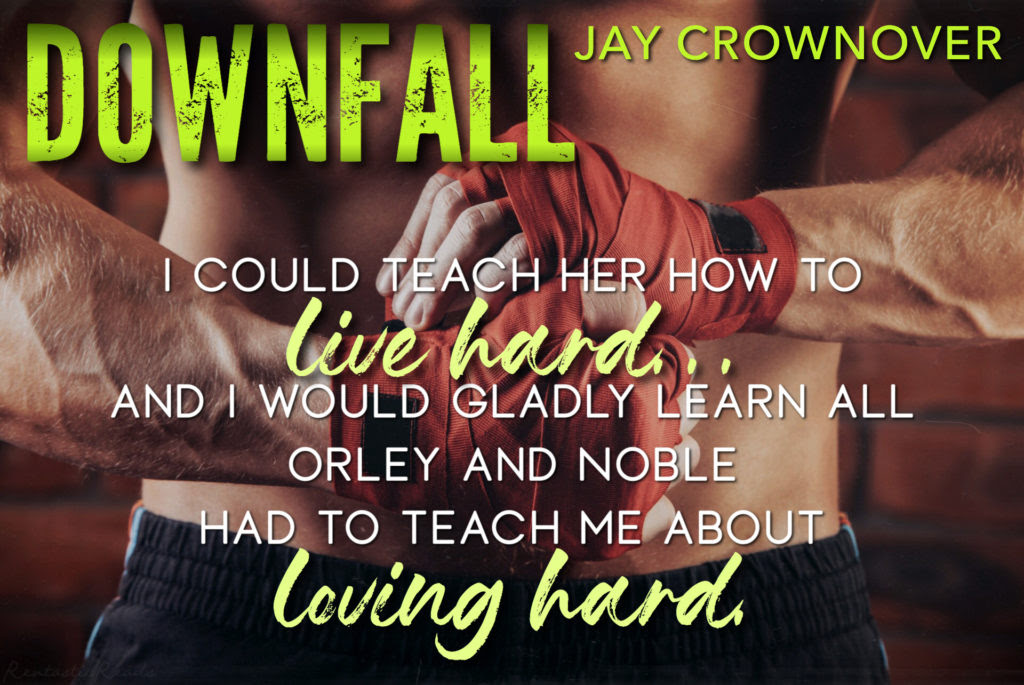 EXCERPT:
~SOLO~
“I’m not anyone’s savior, Orley. Don’t get that confused.”
She sighed again and pushed herself up off the floor. “I’m not confused. I’m incredibly lucky.” She sounded like she felt anything but lucky. “I want to do something nice for you. I have limited options, but if you want to come next door for dinner one night, Noble and I would love to have you.” She waved a hand around my kitchen, “I may have noticed you don’t keep much of anything edible on hand when I was looking for the coffee.”
Guiltily, I glanced at the abandoned bag of tater tots on the couch. “I’m on the go a lot. I usually just grab something I can eat on the run. Plus, I can’t cook.” My mom was a great cook, though, or she had been at one point. I couldn’t remember the last time I’d had a home-cooked meal. “Do you cook?” She was so young, it was hard to picture her slaving over a hot stove on the regular.
Orley nodded. “Sure. I mostly throw stuff together geared to the palate of a toddler, but I’m sure I can figure out something adult appropriate for one night. I really owe you more than I can ever repay. Being a good neighbor is the least I can do.”
I did a mental rundown of my week trying to find a hole where I could fit her in. Not for the first time a wave of exhaustion washed over me when I realized how every hour of my days were packed. It shouldn’t be nearly impossible to eke out a night for something as easy as dinner. Finally deciding I was just going to have to skip a training session or get up even earlier to work on school work, I told Orley I would be over on Wednesday night.
She nodded at me and took a step forward. I went to move out of the way so she could get out of the small space without feeling crowded, but she caught me completely off guard when she walked right up to me and wrapped her arms around my waist. I felt her soft breath against the base of my throat and her soft hair brush against the bottom of my chin. I reflexively put an arm around her shoulders and returned her embrace. If she tilted her head back just a little, there wasn’t enough self-control in the world for me to keep my mouth off of hers. I would kiss the shit out of her, even though I knew it was the last thing she needed.
“I’ve never had anyone like you in my life, Solo. You terrify me.” She hugged me hard enough I had to bite my tongue to keep the yelp of pain from my jacked-up ribs at bay.
“That street goes both ways, Orley. I’ve never met anyone like you either.” I never thought I would to be honest.
She let me go and took a deep breath. She was halfway across the room when I realized something. “Hey, what about you. You never told me your last name.”
She stopped by the door, her back to me. For a minute I thought she didn’t hear me, but then she pulled the door open and called softly, “I’ll see you on Wednesday night.”


She slipped out the door without another word, leaving me with one more piece of a puzzle I was determined to put together. Figuring out my pretty neighbor was going to have to wait. I still needed to shower and drive out to see my mom. My obligations were never-ending and usually, I liked being busy enough I didn’t have to think about much of anything. Lately, I found myself resenting every minute that took my attention away from the mysterious redhead I couldn’t stop thinking about. 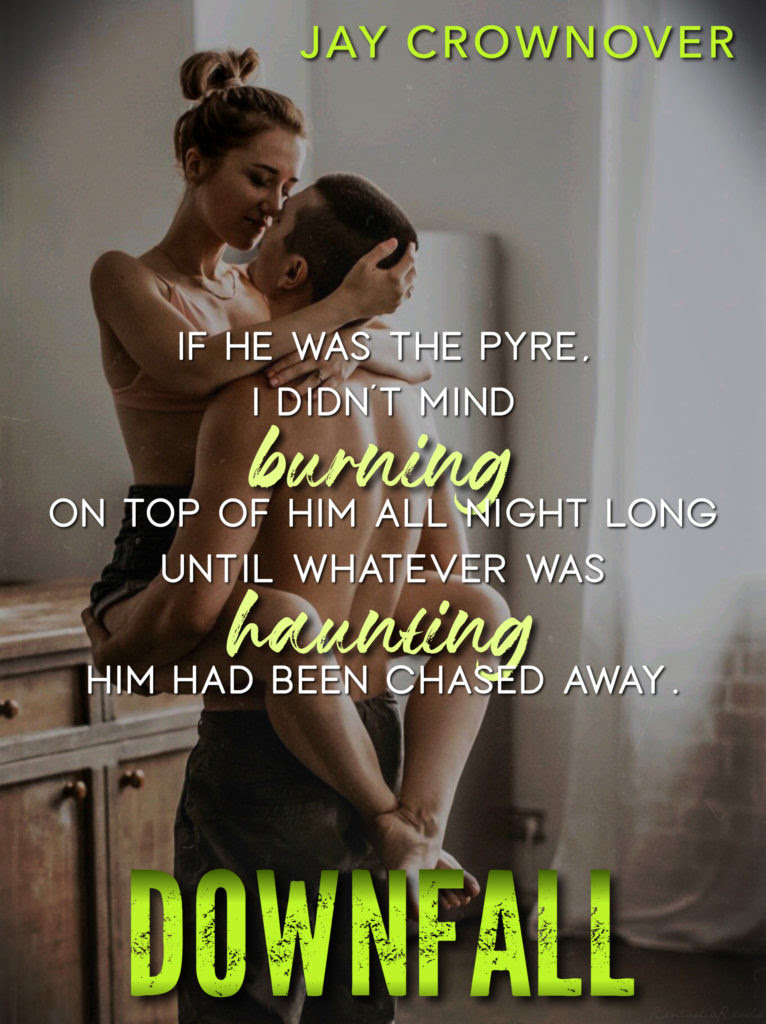 
Words We Love By – Review & Excerpt


Reviews by Tammy and Kim (Rachel and Jay) – Review & Excerpt


A Book Nerd, a Bookseller and a Bibliophile – Review & Excerpt


BOOKS to LUST BY – Review & Excerpt


I Heart Romance & YA – Review 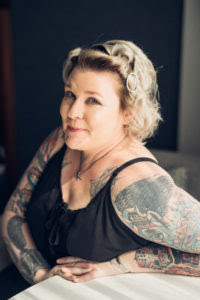 About Jay Crownover:
Jay Crownover is the international and multiple New York Times and USA Today bestselling author of the Marked Men series, the Saints of Denver series, the Point series, the Breaking Point series, the Getaway series, and the Loveless, Texas series. Her books can be found translated in many different languages all around the world. She is a tattooed, crazy haired Colorado native who lives at the base of the Rockies with her awesome dogs. This is where she can frequently be found enjoying a cold beer and Taco Tuesdays. Jay is a self-declared music snob and outspoken book lover who is always looking for her next adventure, between the pages and on the road. For more on Jay and her books, visit www.jaycrownover.com.