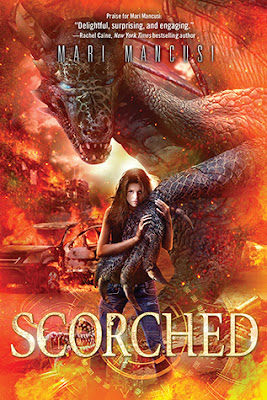 
Description:
Trinity
Don’t leave me here... It starts with a whisper. At first, Trinity thinks she’s going crazy. It wouldn’t be a big surprise—her grandpa firmly believes there’s a genuine dragon egg in their dusty little West Texas town. But this voice is real, and it’s begging for her protection. Even if no one else can hear it...

Connor
He’s come from a future scorched by dragonfire. His mission: Find the girl. Destroy the egg. Save the world.

Trinity has no idea which brother to believe. All she has to go by is the voice in her head—a dragon that won’t be tamed.

My Review:
Let me start this review by saying one of the only reasons I wanted to read this book was because of the cover. Seriously I know you shouldn’t judge a book by its cover, but that is totally what I did. Thankfully it worked out in my favor though because Scorched was a great book.

Trinity Foxx and her grandfather are struggling to make ends meet. Even though they have next to no money Trinity’s grandfather buys a real dragon egg he swears will help them get back on their feet. When the dragon egg starts talking to her Trinity knows she’s in trouble, and when men in black break into the museum to steal the egg? Well, things aren’t going so great for her. On the run with a boy trying to kill the egg, running from a boy who wants to save the world using the egg Trinity isn’t sure who to trust anymore.

Connor doesn’t want anyone to have the egg, he wants to destroy it before the future where he comes from comes true. He’s lost everyone he’s ever cared about and now he needs to do everything he can to end the dragon menus before it begins. Contrary his brother wants to save the dragons. He thinks he can save the future if they just treat the dragons right.

I liked all the characters. Trinity wasn’t perfect, but she has her moments of strength. After her dragon is born she does everything she can to take care of her. She loves her and I liked that despite the people around her she was always on guard. I also liked that when she and her grandfather get separated she never stops thinking about him. I think sometimes when characters get into a new world they forget the people most important to them, and that didn’t happen with Trinity.

Conner and Caleb were both super interesting characters. I liked reading from both of their POV’s and that had me questioning my stance on Trinity and her dragon a lot. I felt that the whole story was great and so was the writing. I’m not in a huge rush to go out and get the next book, but I don’t think it will disappoint. 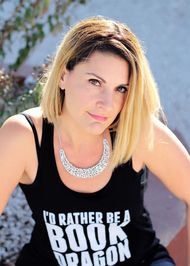 Mari Mancusi used to wish she could become a vampire back in high school. But she ended up in another blood sucking profession --journalism -- instead. Today she works as a freelance TV producer and author of books for teens and adults.

When not writing about creatures of the night, Mari enjoys traveling, cooking, goth clubbing, watching cheesy horror movies, and her favorite guilty pleasure--videogames. A graduate of Boston University and a two time Emmy Award winner, she lives in Austin, Texas with her husband Jacob, daughter Avalon and their dog Mesquite. You can find Mari online at www.marimancusi.com or www.bloodcovenvampires.com.