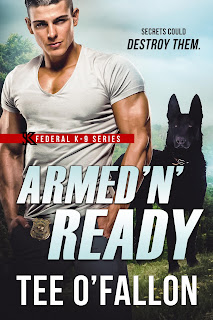 Massachusetts State Police Sgt. Nick Houston is as tough as they come, and he and his K-9, Saxon, are hot on the trail of a major illegal gun dealer. But his best lead—the beautiful owner of the Dog Park Café, Andi Hardt––is not cooperating. Doesn’t matter how sexy she is, or that his dog seems to be in love with her. She’s a suspect and he won’t cross that line. Ever.
Andi Hardt sank everything into her dream business—the Dog Park Café, a restaurant catering to dogs as much as people. Now everything is in jeopardy because of one extremely frustrating, incredibly hot state trooper. Like it or not, she’s in Nick’s crosshairs, and he’s calling the shots. Her only option: cooperate, or lose everything she’s worked so hard for.

Nick and Andi are catapulted straight into the danger zone, forcing them to make life-altering choices, and face their desires. Risking his life for Andi is the easy part. Risking his heart is the toughest assignment Nick will face.


My Review:
Ah! This book was so incredibly good. I picked it up during my lunch break and could not put it down (Shhh!). Seriously, I was drawn in from the first pages and flipping pages like crazy trying to find out what would happen next.

Andi is staying at her friends' house washing her dog when BAM! Po-Po comes barging in with a ginormous dog. What comes next is Andi finding out her friend has been doing shady business for some time that's led to the increase of gun sales in the state. Now, her bank accounts are frozen and she's having to work with Nick and his dog Saxon, the pair who barged in on her.

The chemistry and relationship between Andi and Nick was off the charts steamy. I really enjoyed the somewhat slow burn their relationship took. They got to know each other before the sexy times were introduced. The sexy scenes were written really well, not rushed and not anything crazy involved.

Armed N' Ready was a fantastic read. Nice consistent pacing; nothing felt too rushed or too drawn out. The romantic aspects of the story felt realistic and were very enjoyable to read about. The characters were fantastic and while dealing with their own trauma they also had some great character development.

I loved the bits of action in this story as well. I felt like they were well placed and not just there to push the characters together. Totally great story.

So happy for these characters and how they ended up and I can't wait to see where this series leads us next.


Excerpt
She finished setting a table at the far end of the deck, then paused to look into the dog run. Her profile was to him, and he could see a smile forming on her lips, but it was short-lived. Slowly, she turned, searching the tables she hadn’t gotten to yet, and he understood what she was looking for. Him. Dogs like Saxon were distinctive in size and color. There was only one of him within at least a several-hundred-mile radius, and wherever Saxon was, Nick was.
When she finally found him, her eyes narrowed to slits and her lips compressed into a thin line. With the tray still in her hand, she took a deep breath and headed straight to his table with long, determined strides.
So much for their little truce yesterday afternoon. She had to know something was up.
“Good morning,” he said when she came to stand beside his outstretched legs. From the irritated gleam in her eyes, he thought she might dump the tray over his head.
She set down the tray and crossed her arms. “What are you doing here?”
A light breeze brought with it her scent, all flowery and pretty. No matter how much he

wished otherwise, he couldn’t deny it. Something about her torqued every one of his senses.
“Can’t a guy get some relaxation while he’s watching his dog play?” He locked his hands behind his head and looked up at her.
“I have no doubt this is not a social call. For you or your partner.” She jerked her head to the dog run.
“And you accused me of being overly suspicious?” He clucked his tongue. He was beginning to enjoy this. “Now who’s being suspicious?”
Her lips compressed into an even thinner line. “I’m not stupid, Sgt. Houston.” She yanked out the chair next to his, then sat and leaned into his personal space. With her blue eyes and sun-kissed complexion, she was just as lovely as he remembered. “I know you want something. You said you don’t deal in bullshit, so how about doing me the courtesy of getting to the real reason you’re here.”
“Fine.” He unlocked his hands from behind his head and leaned in until their faces were only inches apart. Bad idea. This close and his senses were more than going into overdrive—they were sparking with ignition.
Her sweet scent was in his nose and lungs. Her warm breath fanned his face like a gentle caress.
The job, he reminded himself.
He hadn’t acted since college, but he could do it, and he wouldn’t fail.
Showtime. Act I, Scene I, starring Nick Houston.


“Until Joe Myer shows up, I’m your new bartender.” 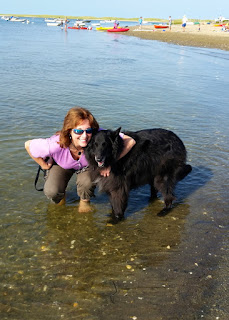 About Tee:
Tee O'Fallon has been a federal agent for twenty-two years, giving her hands-on experience in the field of law enforcement that she combines with her love of romantic suspense. Tee's job affords her the unique opportunity to work with the heroic and sexy men in law enforcement on a daily basis. For Tee, research is the easy part!

Tee O'Fallon is the author of the Federal K-9 Series and the NYPD Blue & Gold Series. Tee has been a federal agent for twenty-three years, and is now a police investigator, giving her hands-on experience in the field of law enforcement that she combines with her love of romantic suspense. Tee's job affords her the unique opportunity to work with the heroic men and women in law enforcement on a daily basis. When not writing, Tee enjoys cooking, gardening, chocolate, lychee martinis, and all creatures canine. Tee enjoys hearing from readers and can be contacted here where you can also Sign up for Tee's newsletters and contests!