It's almost Halloween everyone!!! I have a huge stack of Halloween worthy books that I desperately need to give away!!!

I currently am housing 13 (coincidence?) copies of Vanguard (Razorland #4) by Anne Aguirre. I would be so happy if you can all help me give these beautiful ARC's a new home. 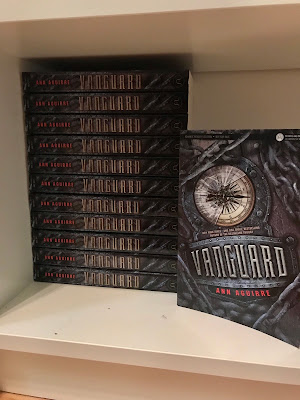 Book Info:
The Razorland saga continues. Since the war ended, Tegan has dreamed of an epic journey, so when she has the opportunity to sign on as ship's doctor, she can't wait. It's past time to chart her course. Millie Faraday, the kindest girl in the free territories, also yearns to outrun her reputation, and warrior-poet James Morrow would follow Tegan to the ends of the earth.

Their company seems set, but fate brings one more to their number. Tegan will battle incredible odds while aiding Szarok, the Uroch vanguard, who has ventured forth to save his people. Szarok is strange and beautiful, like a flower that blooms only in the dark. She shouldn't allow him close, as such a relationship is both alien and forbidden. But through stormy seas and strange lands, she will become stronger than she ever knew.

The giveaway is super easy!
Just one comment and you're entered to win!


For more information on the series scroll down.

ENCLAVE:
New York City has been decimated by war and plague, and most of civilization has migrated to underground enclaves, where life expectancy is no more than the early 20's. When Deuce turns 15, she takes on her role as a Huntress and is paired with Fade, a teenage Hunter who lived Topside as a young boy. When she and Fade discover that the neighboring enclave has been decimated by the tunnel monsters--or Freaks--who seem to be growing more organized, the elders refuse to listen to warnings. And when Deuce and Fade are exiled from the enclave, the girl born in darkness must survive in daylight--guided by Fade's long-ago memories--in the ruins of a city whose population has dwindled to a few dangerous gangs.

Ann Aguirre's thrilling young adult novel is the story of two young people in an apocalyptic world--facing dangers, and feelings, unlike any they've ever known.

Down below, she was considered an adult. Now, topside in a town called Salvation, she’s a brat in need of training in the eyes of the townsfolk. She doesn't fit in with the other girls: Deuce only knows how to fight.

To make matters worse, her Hunter partner, Fade, keeps Deuce at a distance. Her feelings for Fade haven’t changed, but he seems not to want her around anymore. Confused and lonely, she starts looking for a way out.

Deuce signs up to serve in the summer patrols—those who make sure the planters can work the fields without danger. It should be routine, but things have been changing on the surface, just as they did below ground. The Freaks have grown smarter. They’re watching. Waiting. Planning. The monsters don’t intend to let Salvation survive, and it may take a girl like Deuce to turn back the tide.


HORDE:
The horde is coming.

Happy almost Halloween!
Posted by Reese's Reviews at 10:58 AM

Email ThisBlogThis!Share to TwitterShare to FacebookShare to Pinterest
Labels: Giveaways