Release Day blitz for HOW THE EARL ENTICES by Anna Harrington

Release Day Blitz for Anna Harrington’s HOW THE EARL ENTICES!

Join us in the celebration for the release of Anna Harrington’s HOW THE EARL ENTICES! We are thrilled to have you with us for the Release Blitz celebration!

HOW THE EARL ENTICES is the fourth installment in her wildly popular, Capturing the Carlisles series! Don’t wait and jump into this spicy yet humorous Regency romance! Plus, enter to win the first three books from the Carlisle series! 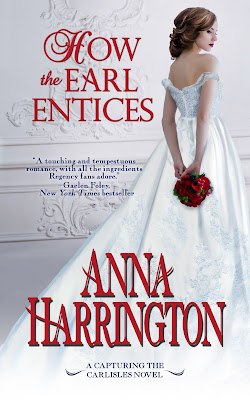 
Synopsis:
WHEN OLD DECEPTIONS …
Ross Carlisle, Earl of Spalding, has dedicated his life to serving his country. When he discovers secrets that could endanger England, he’s forced into an impossible situation—commit treason and race to London to clear his name before the crown turns against him. He’s prepared to abandon everything he possesses in order to protect England, including his life…until he crosses paths with a woman who’s keeping her own secrets.


LEAD TO NEW DESIRES
Ten years ago, Grace Alden fled London in order to protect her son, only to come face-to-face with that past when Ross collapses on her doorstep. They strike a deal—she’ll help him travel to London if he helps her reclaim her son’s inheritance. But as old deceptions turn into new desires, will they be willing to sacrifice everything they hold dear in order to protect the people they love?


“Where are the documents?”
Ross Carlisle, Earl of Spalding, spat out a mouthful of blood onto the midnight-black deck of the pitching ship as the storm intensified around it. “Go to hell!”
A fist slammed into his stomach. He doubled over in gasping pain, coughing and struggling for breath, yet thankful for the pouring rain that cooled the bruises the men had already put on his ribs and face.
The two Frenchmen holding his arms jerked him up straight.
Their leader grabbed him by the hair and yanked back his head. “You are a murderer and a traitor. No one will care what happens to you.”
Ross gritted his teeth against the pain.
“So I will ask you one more time before I cut off your kneecaps,” the thug threatened in street French, having to yell even at such close range to be heard over the wind and driving rain. In his free hand he brandished a knife. “Where are the documents?”
Ross glared at him, refusing to answer.
So it all came to this…a decade serving the crown as a soldier and diplomat, an unblemished reputation without a hint of scandal, more recently a dangerous pursuit in which recognition would never have been possible—only to end ingloriously on a fishing boat being tossed about on the Channel.
He’d been running for the past week, fleeing for his life from Paris to the coast with hired henchmen on his heels. First on horseback, then on foot, changing identities as easily as other men change clothes. But he’d been unable to throw them off his trail, and always they’d been less than a day behind. Then a handful of hours. By the time he’d reached Calais and found a captain brave enough to take him across the Channel in this storm, they’d caught him. In a matter of minutes he’d be dead.
And damn the world that the last person he thought about was Christopher! Not one of his French mistresses, not one of his first loves as a boy, not even his mother—but his brother. How the last thing Ross did in life was prove Kit right, that eventually he’d be discovered and that even his post at the Court of St James’s wouldn’t be able to save him.
The Frenchman released his hair and stepped back, struggling to keep his footing on the wet, rolling deck. With a menacing gleam in his eyes, he lowered the knife toward Ross’s legs. “Where are the papers?”
The knife tip sliced across his left thigh and through the rough work trousers he’d donned in his last attempt to hide, biting into the flesh beneath. Ross sucked in a pain-filled gasp through clenched teeth and bit back an ironic laugh—his left thigh.
The boat rose on the swell of a wave, then dropped with enough force that the men holding his arms wobbled to keep their balance. His interrogator stumbled backward—
Now.
Ross lunged toward the closest railing, tearing his arm free of the man on his right and catching the one on his left off-balance. He lowered his shoulder and rammed it into the man’s chest to push past. All went dark as he tumbled over the railing and into the black sea below.


Enter to win!!
A signed copy of the first three books in the Capturing the Carlisles series - IF THE DUKE DEMANDS, WHEN THE SCOUNDREL SINS, and AS THE DEVIL DARES.
(eBooks if the winner is international) 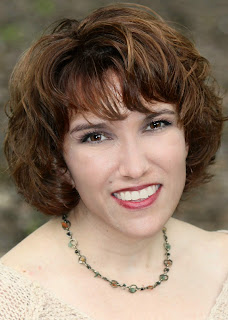 I fell in love with historical romances—and all those dashing Regency heroes!—while living in London, where I studied literature and theatre. I love to travel, fly airplanes, and hike, and when I’m not busy writing, I can usually be found in my garden, tending to my roses. I love to hear from readers and can be reached at anna@annaharringtonbooks.com or follow me on all my social media. And be sure to sign up for my newsletter to be the first to receive exciting news, enter contests, access exclusive content, and more!