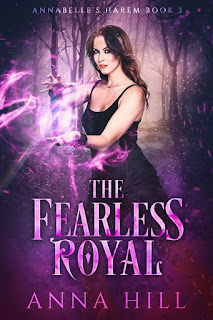 
One woman, three men — and their desire to reclaim their kingdom. Annabelle is so close and yet still so far from defeating King Robert. The closer she gets to finding the key to overthrowing him, the more complications seem to rise up. But she is determined to destroy him because if she doesn't her home country of Elderan will rot in poverty and turmoil forever. Up until this point, Annabelle has only been focused on one thing: destroying King Robert and saving her country of Elderan from his wrath. But now that she is actually close to defeating him, she has to learn more than magic. One of the members of her royal guard, Rhyion, helps to teach Annabelle everything she needs to know about the government of Elderan. As Annabelle considers what kind of Queen she is going to be, she also has to consider that her feelings for Rhyion are growing. But she’s already in a relationship with the two other members of her guard, Angelo, and Lio, is it greedy of her to want Rhyion too? …and can she balance her love of the three of them with the responsibility of being Queen of Elderan? This steamy reverse harem urban fantasy is the final book in the Annabelle's Harem series! Readers will be absorbed in the action, adventure, and romance in the last book of the series.


The Fearless Royal Excerpt:
I made my way down the hall, not even bothering to put on pants because the oversized shirt covered midway down my thighs.
And I’d lost a lot of my modesty, anyway. I lived in a house with three guys, two of whom I was sleeping with, and none of whom seemed to place any value on covering up. Their shifter inclination toward nudity was obvious.
But I liked that they’d made me more relaxed. It was nice to just walk around the house and be totally comfortable with my body. It made me feel almost… powerful. I could understand why my witch ancestors used to walk around their castles naked without a care in the world. Something about it was just… incredibly empowering.
I knocked on Rhyion’s door quietly, hoping not to startle him if he was still asleep. I wasn’t sure why, considering he was basically never asleep at this time.
"Come in,” he said, as he always did. He was sitting at an old desk in the corner of his room.
It was a desk that had been left here by whoever lived in this cabin before, probably fifty years ago. This island used to be an old shifter compound until they outgrew it and moved to the new island—the one where I had originally been taken to by Angelo. 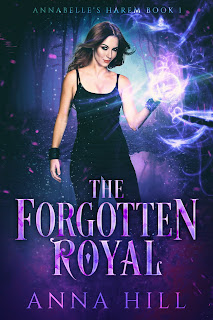 
Annabelle doesn’t know who she has left to trust. After being captured by King Robert of Elderan, a brutal ruler who will stop at nothing to make sure witches never rule the country again, Annabelle has been cut off from everyone and everything — including her powers as a witch.


Until Angelo, a member of her shifter guard arrives to save her.


Annabelle is a witch, the last of her kind, and it’s her destiny to return Elderan to its former glory. But how can she focus on saving her entire country when she’s worried about Angelo’s safety? How can she topple an abusive King when he is equally as powerful as her?


…and how can she stay focused as she’s falling even deeper in love with the men who protect her?


“Who are you?” I asked first.
“My name’s Angelo,” he told me. “I’m a wolf shifter, as you can well see.”
“Yeah, shockingly, I got that part.” I rolled my eyes. “Real question is, why the hell were you here tonight? Why did you save me? How did you even know to save me? And… who was that guy?”
God, the questions were just flying out.
He sighed. “I saved you because saving you is my one and only objective. It has been for several years now.”
I scoffed. “Your… objective?”
“Yes, I’ve been tasked with protecting you. It’s the most important task I’ve taken on in my short life. For years, I have been watching you. I’ve been nearby, ready to spring into action if ever necessary.”
My eyes widened. “For years? You’ve just been… stalking me?”
“I wouldn’t use those words, but yes. I have had to keep a close eye on you to keep you safe.”
“But… I've never seen you before today,” I told him in disbelief.
“I am good at what I do. It would have only made my job harder if you knew you were being watched. So I never presented myself to you. I was purposefully under the radar.”
“If you’re purposefully under the radar, why did I see you today? And when you say tasked with this… by who? Who wants to protect me? And why?” I was starting to lose my grip on reality. Nothing he was saying was making sense. I was still quietly hoping that I’d wake up from this weird dream any moment now.
“I showed myself to you today on purpose as well. Today, I needed you to know who I was. I needed you to trust me. It had been long prophesized that today there would be an attack on your life, and it was my job to prevent that. I wasn’t sure you’d trust a complete stranger; the fact that I was recognizable helped to keep you protected.”
This was so much information.
“But… what the hell do you mean? Prophesized by who? And that still doesn’t explain who sent you to protect me and who wants me dead!”


He thought about this. “Okay, there is a lot to explain and I am not being very thorough, so let me try to say this in a more complete way. Annabelle, you are a very important woman. The fate of your life determines the fate of Elderan. There is no one person that has tasked me with keeping you safe. I guess you could say… it is destiny that has tasked me with it. We have used all the magic that we can attain to see both the past and what little we can of the future. Elderan is falling to pieces and if we’re not careful, it will end up in ruins forever. That is why I am protecting you. That is why you are here.” 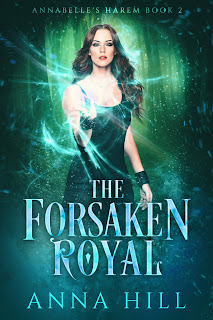 
Until one day she doesn’t.


When Annabelle’s parents are mysteriously murdered, she finds herself barely able to keep it together — and it only gets worse when a wolf shifter named Angelo arrives and explains to her that she’s not nearly as normal as she once thought.


Annabelle is a witch, the last of her kind, and it’s her destiny to help return Elderan to its former glory. But how can she focus on saving her entire country when she’s coming apart at the seams? How can she trust Angelo and his pack mates, Lio and Rhyion?


…and how can she keep herself from falling in love with them?


“You’ll never know how grateful I am for what you did,” I told Angelo. “I know you’re fated to me, and I know you feel like it’s your duty… I understand it’s your responsibility in your mind, but that doesn’t mean it wasn’t an incredible thing to do. You would give your life for me… That’s not a small thing.”
“You know… you’re right. I do feel it’s my responsibility. And as such, I would do it no matter what. Even if I didn’t want to, but… I do want to. Of my own volition. It has nothing to do with fate or responsibility.”
“How do you mean?”
“For me… I want to save you not just because I’m your fated protector. I wanted to save you because I couldn’t stand the thought of harm coming to you. Do you remember when we spoke about your love for Lio romantically, and I said I didn’t care about you loving me romantically?”
“Yes…” I answered quietly, my heart thumping because I could see where this was going.


“Well, I was being truthful then. I didn’t think it mattered to me. But after you were kidnapped… Something came over me. I realized I do love you… so much. You are the only woman that I see, the only one I think about, the only one I could ever imagine being with.” He put one hand on the back of my head, his fingers digging into my hair. “I know that you love Lio, and that still doesn’t bother me. Your love for him does not take anything from my love for you. But I needed you to know that. As I laid there, nearly dying, the only thing that I could think about was that I was going to die before I could tell you how I felt. So I needed you to hear it, before anything else happens to me.”


About Anna:
Anna Hill spends most of her time writing at home where she lives with her boyfriend and cat. She finds immense joy in spinning together dramatic tales of paranormal love. Her stories are full of mystery, action, romance, and strong female characters as well as the men who love them."
Sign up for Anna’s Newsletter!
Facebook | Facebook Group
Posted by Reese's Reviews at 12:00 AM