It’s been two years since the night that changed Ashley's life and two years of hell for Derek. When it all comes to a head at Thanksgiving, will these siblings be able to salvage their relationship? From the award-winning author of Some Boys comes an unflinching examination of rape culture that delves into a family torn apart by sexual assault.

About Someone I Used To Know:

Synopsis:
It’s been two years since the night that changed Ashley’s life. Two years since she was raped by her brother's teammate. And a year since she sat in a court and watched as he was given a slap on the wrist sentence. But the years have done nothing to stop the pain.

It’s been two years of hell for Derek. His family is totally messed up and he and his sister are barely speaking. He knows he handled it all wrong. Now at college, he has to come to terms with what happened, and the rape culture that he was inadvertently a part of that destroyed his sister's life.

When it all comes to a head at Thanksgiving, Derek and Ashley have to decide if their relationship is able to be saved. And if their family can ever be whole again. 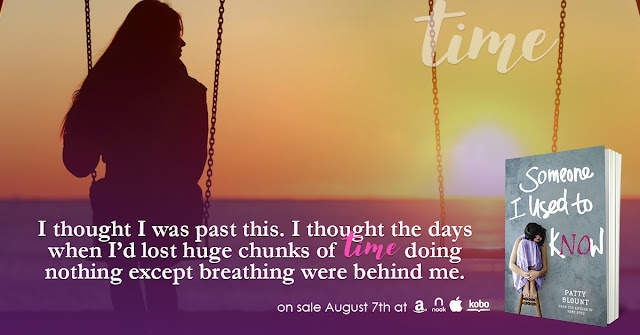 Someone I Used to Know was an amazing story. Patty Blount is an amazing author and any time I see she has a book coming out I jump on board to read her books.

Two years ago Ashley was raped and today she's still coping with everything that happened to her. The story goes back and forth between Ashley and her brother, Derek. Ashley is doing everything she can to get the school to be a safe place for not just her, but everyone. Derek ran away to college and is trying to cope with what happened to his sister and the role he played in the disaster.

I truly loved this story. I first read Some Boys and I loved how I got to be able to see those amazing characters again. It's a look at survivors of rape and how those survivors aren't always only the victims. Ashley and Derek's family is falling apart and the story goes back and forth between who the characters were before the event and after.

Further, this story discusses rape culture and how it's constantly shoved into the media.

I felt this story was very well done. I would recommend this story to any and everyone. I loved that the book didn't have any trigger scenes in it, but still painted the picture of what happened that night to Ashley. I also loved how bringing the other characters in from Some Boys shows the long-lasting effects of trauma can affect someone long past the event.

Someone I Used to Know is an amazing story of survivors. I can't wait to add this book to my shelves soon. 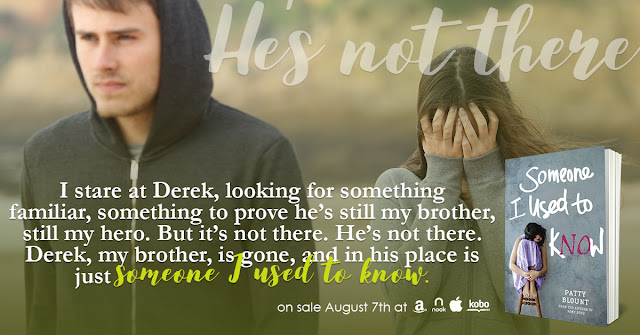 Excerpt:
Copyright© 2018 Someone I Used To Know
Patty Blount

This novel is a companion story to my award-winning SOME BOYS. In this scene, Ian Russell, one of the main characters in Some Boys, meets Derek Lawrence in SOMEONE I USED TO KNOW.
~*~

A knot forms in my gut, a thick and oily clot of guilt. I sink on to the first bench I spot, clutching my middle and trying like hell not to puke. Damn it, I wish to hell I’d beaten the snot out of Victor Patton.
Came close to it.
“Hey, man.”
I twitch and find some guy sitting beside me. No idea where he came from. He’s older than I am, but not by much. Mid-twenties, maybe? Dark hair, dark eyes, some serious muscle.
I nod and shift away, willing my stomach to settle down.
“I’m gonna say something to you,” the guy says. “And you can tell me to buzz off, or you can listen. I see you sitting here, green around the gills, gripping one of those rally flyers, and see a look on your face I know well.”
I shift back to study him. He meets my gaze without flinching, and there’s something in his tone that tells me he’s not kidding.
“Somebody you love got assaulted,” he says, and before I can say anything—before I can even think of something to say—he adds, “Me too.”
I stare at him in disbelief. Are we supposed to do some kind of male bonding over rape...some sort of weird bro hug and then share our feelings? That kink in my gut unclenches, and my breakfast comes up and out. I manage to turn away before I ruin this guy’s day and spew into the bushes behind the bench. It takes a few minutes. When I’m finally empty and want to crawl into the gutter to die, the guy shoves a bottle of water into my field of vision.
“Take it. Keep it.”
Grateful, I crack the seal, chug, and rinse out my mouth. Then I take a nice gulp, sit back on the bench, and wipe my mouth. “Thanks,” I offer a few minutes later, when I’m sure I’m not dying.
“Yeah, no big.”
There’s a long pause. “Girlfriend?” he asks after a minute. And it takes me another minute to figure out he’s asking who I know that got raped. I shake my head.
“Sister.”
“Oh, man. I’m sorry.”
I only nod. What else is there to say? In silence, we watch the perky girl with the clipboard chase down two guys on Rollerblades to sign up for the rally.
He snorts out a laugh. “That girl has some serious fun attitude.”
I laugh, too. “That’s an oxymoron, no?”
Shrugging, he says, “Maybe. Never could keep those lit terms straight.”
That makes me wonder about him. “You’re not a student?”
“No,” he admits. “I graduated a few years ago. Degree in engineering. I work in the city now.”
“So what are you doing here?”
He sighs and looks back to the quad where Perky Girl’s got another pair of guys on the hook for rally duty. “Over there. Under the Rock Stock tent. Black boots.”
I scan the area, find the tent, and see a bunch of people under it. But the black boots do it for me. The girl is hot, like off-the- charts hot. Long wild hair, dark sunglasses, jeans, and a black shirt that’s held together with a series of metal rings. She looks like the lead singer from some hard rock band.
“Oh! I’m sorry. Was she—”
“Yeah. Back in high school. By my friend. At a party she only went to because she hoped I’d be there.”
“I'm sorry.” I sigh.
“I came over here to talk to you because you looked like— well, like a guy about to puke.”
My face gets hot. I swallow another gulp of water and look away. But I can’t deny I’m curious. “How do you...” Deal with it? Avoid killing the guy who did it? I wave my hand, trying to fill in that blank but coming up empty.
He angles his head, studying me. “Get over my guilt?”
Okay. That works, too.
He takes another look at the girl in the black boots and shrugs.
“Still working on it. Being here is part of it. She’s doing the keynote speech at the rally. Took me a while, but I finally figured out that therapy’s not so bad, either.”
My parents wanted us all to go to therapy, but I said no way. Maybe that was a mistake. “Can I ask you something?”
The guy nods.
I swallow more water. “You ever say something you can’t take back? Something that made her hate you.”
He grins and rolls his eyes. “God, yes. I can’t watch a Star Wars movie without wanting to kick my own ass.”
“Huh?”
He waves a hand. “Long story. I was a real dick to her, embarrassing her in front of my friends so they wouldn’t turn on me. She forgave me. Somewhere along the line, I figured out how to forgive myself so I could be the man she deserves.”
Forgive myself. That’s exactly what Brittany said. I consider that for a couple of minutes and then shake my head. “I gotta go.” I stand up. “Thanks for the water and for—” I wave a hand. “You know.”
“Yeah. No problem. Hope we see you at the rally. Trust me, she’s something.” He jerks a thumb toward the girl in the black boots, and I don’t doubt him for a second.
“Yeah. Maybe.”
He extends a hand. “Ian.”
I shake it. “Derek,” I say. “Thanks again.”
“Here.” He fishes through his pockets and comes out with a business card. “My cell number. I can help. If you want.”
I take off, tucking the card into my pocket along with the blue-and-white flyer. I don’t even know why I’m keeping them. It’s not like there’s any way Ashley’s gonna forgive me. I’m not even sure I can forgive myself. I’ll never be the hero again in her eyes. 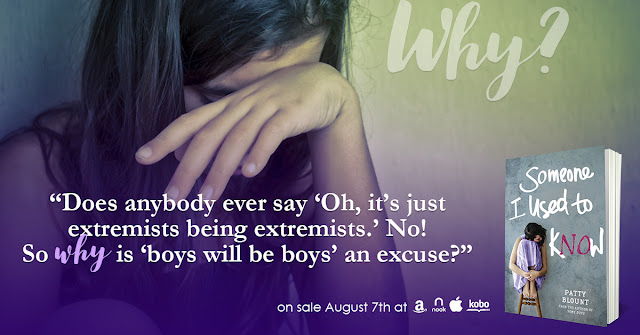 Patty is offering one (1) lucky Grand Prize winner a $25 Amazon Gift Card and a paperback copy of Someone I Used to Know, plus three (3) Runner-Up winners a $5 Amazon Gift Card. To enter for your chance to win one of these exciting prizes, please fill out the Rafflecopter link below: 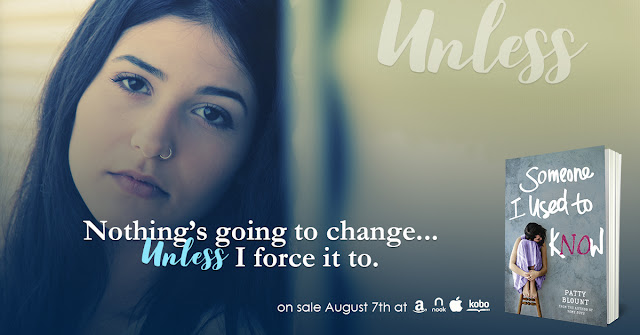 Patty Blount grew up quiet and somewhat invisible in Queens, NY, but found her voice writing smart and strong characters willing to fight for what’s right. Today, she’s the award-winning author of edgy, realistic, gut-wrenching contemporary and young adult romance. Still a bit introverted, she gets lost often, eats way too much chocolate, and tends to develop mad, passionate crushes on fictional characters…and actors like Gilles Marini….and Sam Heughan. Okay, so Patty’s not nearly as cool as her characters, but she is a solid supporter of women’s rights and loves delivering school presentations.

Patty is best known for her internet issues novels, including SOME BOYS, a 2015 CLMP Firecracker winner and RWA Rita Finalist, and SEND, a 2012 Junior Library Guild Fall Pick. Her upcoming release, SOMEONE I USED TO KNOW, has already been selected as a 2018 Junior Library Guild Fall Pick. Visit her website at pattyblount.com, where you can sign up for her newsletter. She blogs at YA Outside the Lines and is also active on Twitter and Facebook. When she’s not writing, Patty loves to watch bad sci-fi movies, live tweeting the hilarity, and scour Pinterest for ideas on awesome bookcases. Patty lives on Long Island with her family in a house that, sadly, lacks bookcases. She loves hearing from readers, especially when they tell her she’s cool (even though she knows it’s not true), and is easily bribed with chocolate. Never underestimate the power of chocolate.


Please add Barclay Publicity’s button at the bottom of your post and/or on the side column of your blog and link it back to http://www.barclaypublicity.com:
Posted by Reese's Reviews at 12:00 AM