The Highlander’s Stolen Bride is LIVE!

From USA Today Bestselling Author of the Stolen Bride Series comes a brand new and exciting family saga! For fans of Scottish historical romance, the Sutherland Legacy propels you into the Highlands with tales of daring adventure, irresistible heroes, and passion!


Add THE HIGHLANDER’S STOLEN BRIDE to your TBR pile on Goodreads! Then keep reading to get an EXCLUSIVE sneak peek and enter the giveaway for a $50 Amazon Gift Card or an eBook from Eliza! 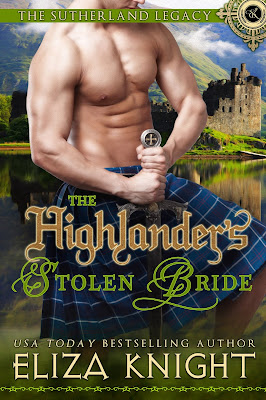 Synopsis:
After a harsh betrayal, Magnus “Strath” Sutherland, Laird of Dornoch, accepts a commission from the king to squelch an English lord’s siege at the Scottish border. What better way to torment his new English enemy than to defeat his army and steal his beautiful bride? At first, Strath plans to toss the Sassenach lass into a dark cell and forget about her, but there is something about the way she defies him that he finds alluring, not to mention how very much he’d like to kiss her.

Eva de Clare, youngest daughter of the Earl of Northwyck, is pledged in matrimony to a cruel lord blackmailing her family. Her salvation comes in the form of a terrifying Highlander who interrupts the ceremony. But salvation turns to horror when she’s plucked from where she stands and whisked across the Scottish border. Eva isn’t about to be made a prisoner of war, and once she sees the kindness beneath her captor’s hard exterior she decides she won’t be sent back to England to be wed either. In fact, she just might be the woman to warm the Highland warrior’s hardened heart.


Enter to win a $50 Amazon Gift Card or an eBook from Eliza!
a Rafflecopter giveaway 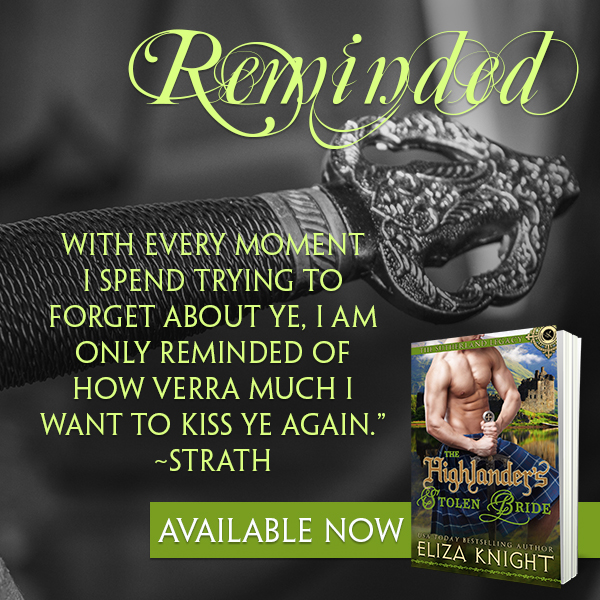 Excerpt from THE HIGHLANDER’S STOLEN BRIDE:


What is the bastard up to?
Magnus “Strath” Sutherland, the Laird of Dornoch and Earl of Strathnavor, sat on his horse in the woods just beyond the perimeter of Northwyck Castle. He’d been sent south on a mission by his King, Robert the Bruce. One, to determine if the daughter of Lord Northwyck was dead as had been claimed, and also to stop a certain vile Sassenach lord from his continued raids at the border, who may or may not be holding her captive. That man was in the castle before him.
A plan to ambush Belfinch and his men on the road had been thwarted when the whoreson disappeared. Unfamiliar with the land this far past the English border, Strath and his men had found their quarry on the moors riding at a clipped pace toward this castle. This turnabout would work in their favor it seemed, since he could now take care of both of his king’s requests at once.
The keep was only about four stories high, if he had to guess, and the wall was about half that. There was a thin moat around the perimeter, and a village to the west. Smoke filtered out of a few chimneys in the village, but it was only late afternoon, so most of the peasants would likely be in the fields working. Smoke came from several chimneys in the castle keep.
From the intelligence Strath had been able to gather, this was the home of another man, the Earl of Northwyck. None of Belfinch’s men had waited outside, which meant the Earl of Northwyck was used to the men coming here, or he’d been forced. But Strath was betting on him being an ally. If that were the case, which seemed likely, it would behoove him and his men to remove all the threats.
This was war, after all. And if he let them go, they’d only continue the border raids he’d been sent to stop. Strath wasn’t about to disappoint his king. As to why the king cared about a lass, that was a question he’d have to leave unanswered, for his liege had not offered the information.
“What did ye find?” he asked when Tomaidh, his finest scout and best mate, returned.
“Two entrances that I could make out. The main gate has a wide drawbridge over the moat, still lowered from when Belfinch’s men went inside, and a postern gate that looks to be accessible only by a narrow drawbridge, but it was not lowered. The walls are guarded by a dozen men, more concentrated on the front gate with only a few at the postern. And I think one spotted me.”
“Damn.” Strath, as any warlord about to lay siege, much preferred the element of surprise.
“I was careful, but when I mounted my horse by the woods, I think my sword hilt caught the sun just when there was a break in the clouds. I heard a horn blown in the distance, which I’m guessing was the warning. I didn’t come straight here. I rode in the opposite direction and circled back through the woods in case they sent anyone out to follow me.”
“Ye did good.”
“I’m sorry, laird.”
“Dinna fash over it, Tomaidh. We’ll wait then. If they spotted ye, they’ll likely be preparing for an unwanted guest. With enough time, they will think spotting ye was nothing more than someone riding through. They will let their guard down.” Probably not all the way, but enough so he could still attack with success.
And he would succeed. 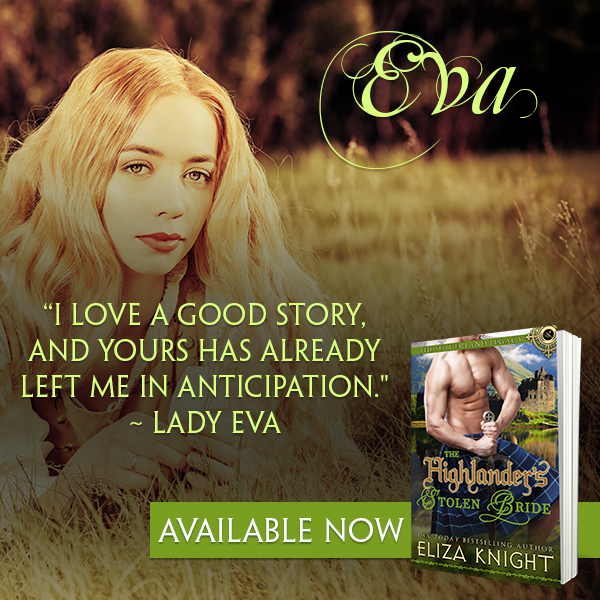 Praise for the Stolen Bride series
“This is a wonderful book. I really enjoyed it. The characters are colourful and the history is well written. I loved the way the heroine could take care of herself in a time when they were never expected to. I have never read this author before but I certainly will look for more of her books.”—Goodreads Reviewer on THE HIGHLANDER’S REWARD

“Ms. Knight has a gift for writing wonderful characters that pull the reader into the story. For fans of Highlander romance, this series is a must read. I highly recommend it.”—Night Owls Reviewer, The Stolen Bride Series

“The Highlander's Reward was an awesome read. I didn't want to leave the world that Eliza Knight had woven, even when the book was done. I just wanted to keep reading.”—Night Owls Reviewer

“If you are looking for a hot romance set against a backdrop of a fascinating time in the history of the world, you need to read this series.”—A Bookish Affair Reviewer on The Stolen Bride Series

“If you are a lover of plaid-covered warriors that make your knees feel like jelly…than this [series] is for you.”—My Not So Vacant Shelf Reviewer on The Stolen Bride Series 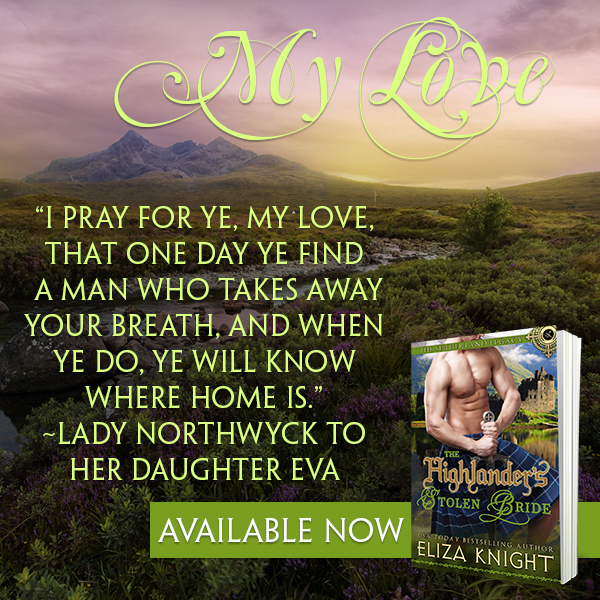 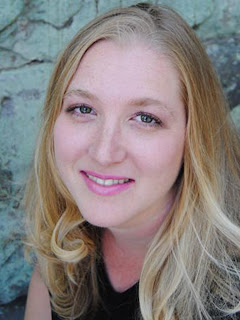 About Eliza Knight
Eliza Knight is an award-winning and USA Today bestselling author of over fifty sizzling historical, time-travel and contemporary romance novels. Under the name E. Knight, she pens rip-your- heart-out historical fiction. While not reading, writing or researching for her latest book, she chases after her three children. In her spare time (if there is such a thing…) she likes daydreaming, wine-tasting, traveling, hiking, staring at the stars, watching movies, shopping and visiting with family and friends. She lives atop a small mountain with her own knight in shining armor, three princesses and two very naughty puppies.