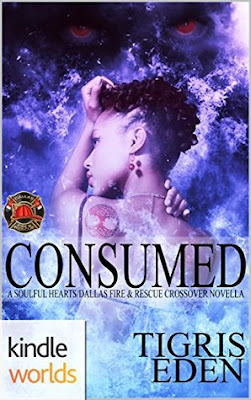 
Blurb:
As a woman in a man’s world, firefighter Abrihet has always had to push just a little bit harder, prove just a little bit more. But her special gifts don’t make that any easier. Fire isn’t something she fights, it’s something she controls. And that’s a secret that she doesn’t want getting out. However, when a routine rescue goes south quickly, and Abrihet is literally pulled from the flames into hell, she has no choice but to accept the hand she’s been dealt.

As the heir to the throne of Wraith, Fire Demon Bael was raised to hate Nefas—half-demon, half-human hybrids. But when he’s sent to watch and pass judgment on the daughter of one of his Enforcers, he finds something wholly unexpected. She’s not an abomination. Actually, she might just be his salvation. The challenge will be getting her to accept him and his ways because as the heir, his world is darker than most.

Despite the odds stacked against them and the unusual circumstances of their meeting, Bael and Abrihet must learn to trust each other and work together. If they don’t, it could mean death for one or both of them. Luckily, their connection is strong, and attraction burns bright. But is the light they share something they can use to fight those who oppose them, or will it consume them both?


My Review:
Consumed was SOOOOOOOOOO GLORIOUS!!!! I loved this story, I definitely need more ASAP! Tigris Eden you never cease to amaze.

Abrihet loves being a firefighter. She loves saving people especially after she’s lost so much. Firefighting isn’t dangerous for Abrihet because she controls fire, she can withstand the flames and the heat. One day when she’s on the job she swears she can hear screams for help, running in to a dangerous situation she finds it was a trap. Now Abrihet has been saved and brought down to hell or Wraith to be mated with Bael her soul mate. Things become all the more complicated with Bael’s brother makes things more and more complicated by challenging Bael for his title to the throne. Plus while Abrihet wants to be reunited with her family and friends she’s fast beginning to realize she needs Bael and much as he needs her.