Blog Tour Kit for Krystal Ford's LOVE, ACROSS THE DIVIDE

When politically ambitious Republican Megan Thompson falls for her Democrat roommate, Andrew Croswell, she must make the choice between career over love, or love over politics. Fans of Jojo Moyes’ One Plus One will love this sexy debut which smashes stereotypes and strives to make sense of our not-so-brave new world. Most of all, it asks a crucial question: Can love bridge the great American divide?


About Love, Across the Divide:


Synopsis:
On the eve of the 2016 elections, young Republican Megan Thompson faces a once-in-a-lifetime opportunity when her boss decides to groom her to run for his congressional seat in 2018. Ambitious and pragmatic, Megan is missing just one thing: a wealthy, well-connected trophy husband.

So, when Megan moves from Florida to DC and lets the congressman broker a power match, she’s looking to get down to work, not fall in love. And she’s definitely not looking to make nice with her new roommate, Andrew Croswell, a liberal environmentalist determined to make her life hell.

After a series of unpleasant blind dates, Megan begins to lose hope of finding her shiny white Republican knight in time to boost her appeal to donors and voters. At last, she hits it off with Brock, a dashing, Don Draperesque spokesman for the NRA and even love-shy Megan thinks he could be “the one.” But as the year progresses, she and Andrew start getting along a little too well, and Megan finds herself second-guessing all her well-laid plans.

Things start spinning out of control when a special election pushes everything up by a year. As Megan races against the clock, she’ll do anything to win—almost. Now she must choose: career over love, or love over politics?


Love, Across the Divide, follows genuine, familiar characters from both sides of the aisle, smashing stereotypes and striving to make sense of our not-so-brave new world. Most of all, it asks a crucial question: Can love bridge the great American divide? 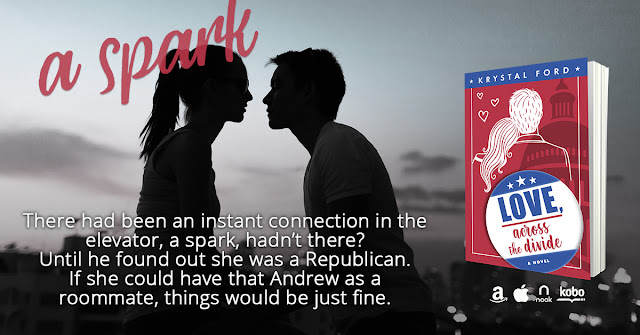 Advanced Praise for Love, Across the Divide:

“An upbeat and thoughtful blend of romance and politics.” – Kirkus Reviews

“America is now a tribal place, and author Krystal Ford has effectively carved into this national polarity to craft a love story for the Trump era.” – Jordana Landsman


Excerpt:
Copyright© 2018 Love, Across the Divide


He turned to her, holding out a bag of corn tortillas. “We are making tacos.” He put her in charge of prepping the toppings, then disappeared into the fridge. When he emerged, his hands were full. “Tomatoes, lettuce, onions, cilantro, avocado, cheese.”
She took the ingredients one by one from his hands and set everything in its place on the counter, beside the cutting board. She stared at the food items like they were questions on a pop quiz she hadn’t studied for. What was she supposed to do with them? Only pride kept her from asking for direction. She lifted the block of cheese and found a grater. This, she could handle.
The kitchen started to fill with the enticing scent of garlic in the frying pan. “Salsa!” Andrew barked. “Mild, medium, or hot?”
Megan didn’t hesitate. “Hot, please.”
“That’s my girl. Chop some onions.”
She flushed with pleasure. Or was it the green chiles he’d just added to the pan? Jeez, pull yourself together, Megan.
“What are you doing?” Andrew yelled, stepping up behind her and cautiously stripping her paring knife from her clenched hand, as though he were talking a suicidal victim off the ledge. “This is not what you chop onions with,” he admonished, holding up the ancient paring knife. “It’s dull as a butter knife! You’ll cut yourself sawing away with it. Now this”—he unsheathed a ten-inch Japanese chef knife from its block of wood—“is what you chop onions with.”
“I know how to cut onions,” she insisted, and started to cut tentatively. Andrew’s watchful gaze made her nervous. Her knife movement was clunky and awkward, leaving her with large, uneven hunks of onion.
He smiled indulgently and stepped closer. From behind her came traces of his hippie soap—eucalyptus and mint, she believed—and a pleasant hint of body odor. “May I?” he asked, encircling her arm with his and wrapping his hand around hers, showing the proper way to hold the knife. “Now start with the tip, and then as you push the weight of the blade down, you make a little rocking motion.”
As they chopped together in culinary intimacy, an unexpected image flashed in her mind, of him fleeing her room with a teddy bear barely covering his muscular butt. And suddenly it sank in—something he’d said during their session with Emily: I’d already gotten undressed for bed.
So, she thought, Andrew sleeps in the buff.
Her cheeks flushed as he murmured gentle encouragements. When he slowly released his grip and took a step back, disappointment flooded her body. 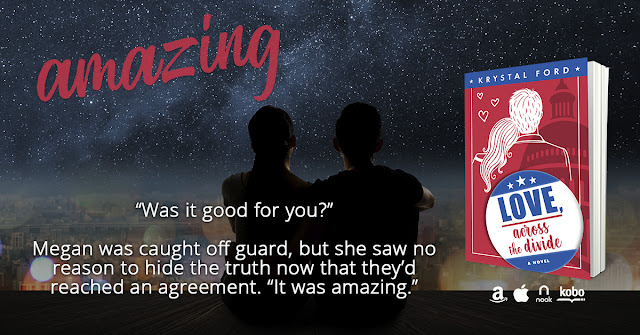 Originally from Montreal, Krystal Ford has fallen in love with the Hudson Valley, New York, where she calls home with her husband and two children. She has a Master of Arts from New York University and, when she's not writing, works as a community organizer around environmental issues. Her favorite pastimes are reading books and gardening.