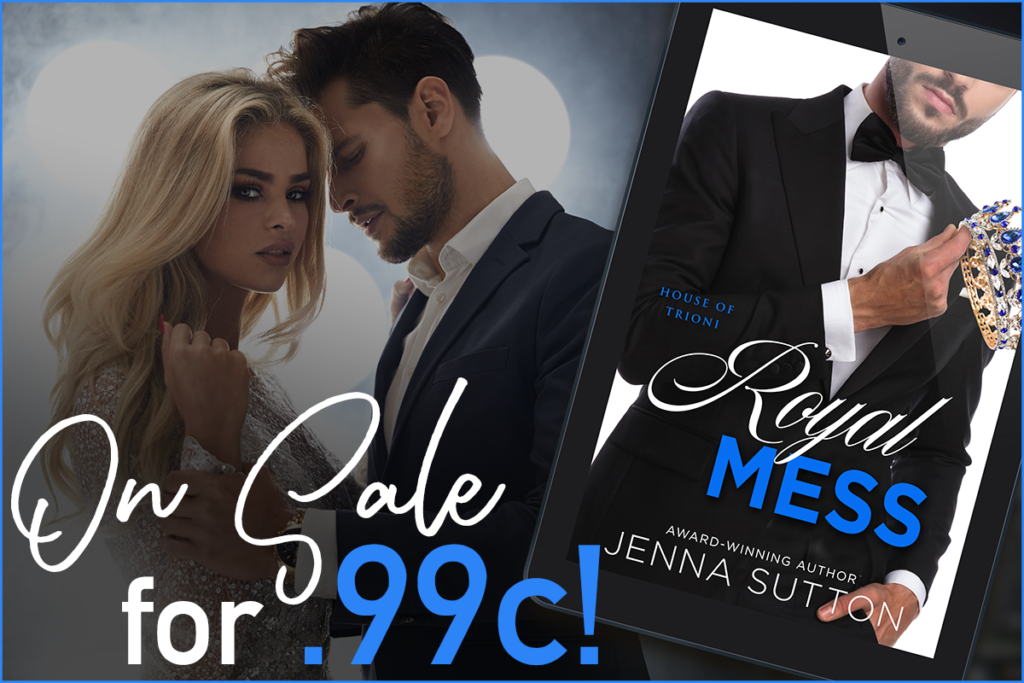 ROYAL MESS by Jenna Sutton is on sale now for just .99c - grab it at this price for a limited time! Two stories about princes, all in one book. Fall in love with Prince Leo and Prince Marco today!

From award-winning author, Jenna Sutton comes the story of two princes who discover that falling in love is messy…


Prince Leo’s icy demeanor has earned him an amusing nickname—the Polar Prince. Unfortunately, the king doesn’t see the humor. If Leo wants to secure the throne of Alsania, he must improve his image. Participating in an organ donation campaign seems like a good start. He expects to donate his organs on his deathbed, so he’s surprised to be matched with a complete stranger who needs his help now.

Tessa Lulach hates to admit it, but she’s a damsel in distress. When a handsome prince offers to save her with a hunk of his liver, she joyfully accepts. She can’t wait to feel like herself again and return to her beloved flower shop. Instead, her identity is revealed, and the quiet life she loves is turned upside down.


As Leo and Tessa deal with the nosy public and ruthless paparazzi, she realizes the Polar Prince is much warmer than he seems—scorching hot, in fact. He willingly gave her a part of his liver, but can he give her his whole heart?


After another failed relationship, Cassie is frustrated with immature, inconsiderate guys. Wanting to escape reality, she attends a masquerade ball and finds herself alone with a masked stranger. For the first time in her life, she acts on impulse, only to end up pregnant and absolutely clueless about the identity of her baby’s father.


When Marco learns of Cassie’s pregnancy and her plans to raise the baby alone, he promises to be there for her, hoping she’ll finally see him as more than just a playboy prince. But then he discovers she’s the woman from the masquerade ball and panics. Will the truth destroy his chance to win over Cassie, or will he convince her that they can have their own happily ever after?

Get your hands on ROYAL MESS for .99c now!

Jenna Sutton is a former award-winning journalist who traded fact for fiction when she began writing novels. Surprisingly, the research she conducted for her articles provided a lot of inspiration for her books. She’s the author of the Riley O’Brien & Co. romances and the new Trinity Distillery series. Although Jenna calls Texas home, more often than not, she’s somewhere else. Her love’s job takes him all over the country, and she tags along, just like a groupie follows her favorite band.


You can find out more about Jenna and her work on her website http://www.jennasutton.com. Sign up for her newsletter at http://bit.ly/1K8MaCH to access the latest news and monthly contests.

Email ThisBlogThis!Share to TwitterShare to FacebookShare to Pinterest
Labels: Sale