A shy art historian, a sexy rock star, a mysterious medieval cross that holds a secret and a love that never dies. Do you believe in soulmates? Find out in Kate McBrien’s steamy debut fans of Love on the Edge of Time and A Knight in Shining Armor will love!


Synopsis:
For fans of Love on the Edge of Time and A Knight in Shining Armor comes an epic romance that proves true love can never die.


Do you believe in soulmates?


A shy art historian. A sexy rock star. A mysterious medieval cross that holds a secret.


Lucy Bianchi has a plan: finish her PhD in art history and land a coveted job at a prestigious Los Angeles museum. Then—maybe—she’ll find time to start dating. Her controlled and predictable world begins to unravel when she chases a runaway dog on the beach and meets a gorgeous stranger.


Justin Hamilton is the charismatic lead singer of the British band Indigo. Years of touring and partying have won him notoriety, and he can have any woman he wants, but who he really wants doesn’t seem to exist.


From their first look—their first touch—Justin and Lucy have a connection that defies logic and deepens their desire for each other. When they see the Varangian Cross at a museum exhibit, they’re flooded with inexplicable shared memories that draw them even closer together.


Justin has to return to London just as a salacious scandal explodes that could tear them apart. Lucy must choose between the safe life she’s cultivated, or go to Justin and discover a never-ending love.


Discovering You is the first book of a contemporary romance trilogy. 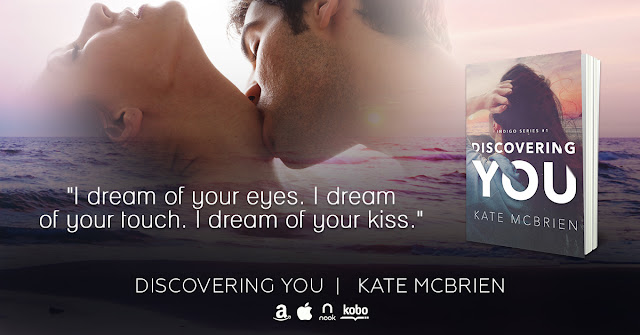 
Justin reached for her hand. “Come here.”
Lucy took one step forward, and Justin cradled her face, gazing into her eyes. He leaned in slowly and gave her a gentle kiss. His lips were soft and full as they touched hers. It was a tender kiss at first, but soon the kiss deepened. His kiss should have felt new, but instead it felt like coming home to something rooted deep within her. His fingers wound around her hair, pulling her even closer to him. He moaned as Lucy parted her lips, allowing his tongue access inside, exploring her depths. Something detonated inside Lucy as she ran her fingers through his hair. It seemed as if all the anxiety she usually had around men had evaporated.
Justin pulled away, his eyes exploring her face in silent wonder.
Lucy let her fingers trace down the side of his face and his stubble. He closed his eyes, leaning into her palm, and smiled with a soft sigh.
When Justin opened his eyes again, his arms slid down around her, pulling her closer, and he kissed her again. She could feel his growing erection, and it increased her arousal even more. She whimpered when he broke their kiss.
“I’ve dreamt of kissing you.” He kissed her again and then nibbled her bottom lip. “I’ve dreamt of you every night since I met you. I can’t get you out of my mind.”
His blue eyes were so like hers it was eerie. “I’ve had dreams of you, too,” she said with a smile.
With a sexy grin, he reached for her again and pulled her close. “I think I’m obsessed with you. You’re the most beautiful woman I’ve ever seen,” he whispered, pushing his hips against her.
Lucy gasped as he pulled off her jacket and tossed it on a nearby chair. His hands caressed her bare arms and she shuddered. His hands were strong, with long fingers tenderly moving across her skin. The pads of his fingertips were a little rough as they touched her. “So soft,” he murmured before he leaned in and gave her shoulder a gentle kiss.
Lucy tilted her head back as he trailed kisses down her neck. He glanced up at her for a moment, as if asking for permission. He ran his fingers across the swell of her breast, bending down to place a gentle kiss. “I want you. I want to know every part of you.”
“Justin,” she whispered, leaning in to kiss him again. “I want that, too.” 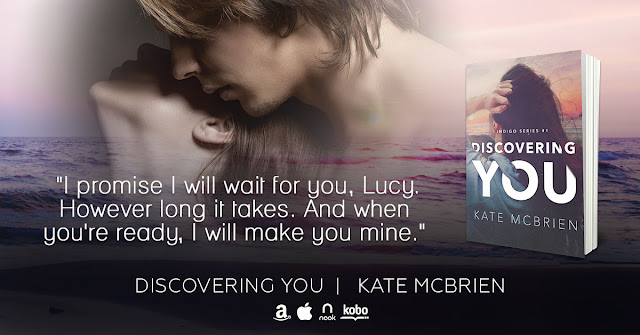 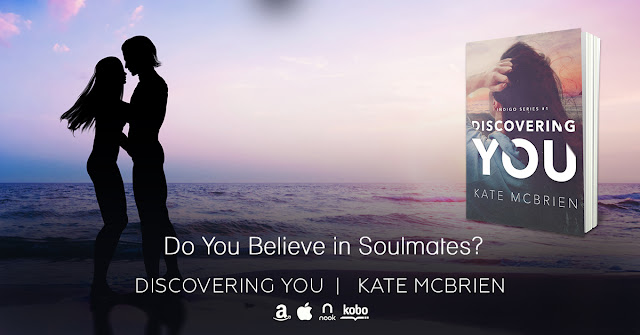 About Kate McBrien:
Kate has an MA in art history from San José State University and has taught art history at a local college. For many years, she has worked as a dental hygienist, courageously offering encouragement to her non-flossing patients.

She has always enjoyed writing but became more serious after being encouraged by a friend to participate in National Novel Writing Month. She began writing historical fiction but soon realized that the romance was taking over the history.


Kate is a Bay Area native who lives near the beach with her husband and Lola, their spoiled Labrador Retriever. When not writing, she enjoys cooking, music, movies, reading, and fangirling over Jamie Dornan.