ARC Review: On the Line by Liz Lincoln 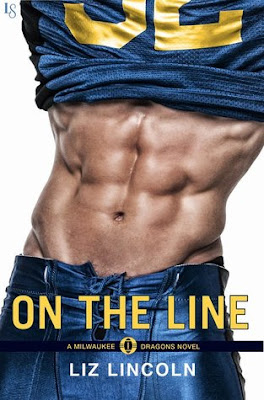 Blurb:
Is this man: A) a super-hot NFL player, B) the guy you’re sexting, or C) your new boss?


If you’re Carrie Herron, the answer is: D) all of the above. First, Carrie starts exchanging steamy text messages with the sexy single dad she meets in line at the grocery store. Then she lands a job as the live-in nanny for the daughter of the Milwaukee Dragons’ newest star. With any luck, she’ll be back on her financial feet before the next cosplay convention rolls around. But when Carrie shows up for work and realizes that her new boss is the guilty pleasure in her phone, she has no choice but to try to keep things professional. Oh, how would Poison Ivy handle a temptation like Seth Chamberlain?

After getting traded from Houston to Milwaukee, Seth’s having a tough time keeping his head in the game, let alone making sure that his daughter is fitting in. So if the only nanny that Madison will tolerate is a grown woman who likes comic books even more than she does . . . well, so be it. Too bad the nanny is also the gorgeous redhead Seth’s been flirting with all this time. But with Carrie’s knowing glances and kissable lips driving him wild, Seth must decide whether he’s ready to put everything on the line.

My Review:
I’ve gone back and forth on how I feel and felt about this book. I’m going to do my best to explain this confliction with this review.

The synopsis got me so dang excited for this book. A comic book nerd main character? Heck yes!! Now while I have read and reviewed a lot of sports-related books I am in no way a sports fan. However, I kind of thought the one character being super nerdy and one being into sports would have been great. Plus the football player having a daughter just sounded like such a unique premise I had to get my hands on this book.

Seth and Carrie's relationship was a little too meh for me as well. Seth and Carrie have an insta-love/ insta- attraction thing going on that would have been okay if I felt it went beyond surface level sex stuff. I did enjoy how the couple went on dates and did other things besides have sex, but all the thoughts surrounding those activities were mostly about sex. I was a bit disappointed with that aspect of things.

Overall, On the Line was a fine read. I didn't think it sucked, but I also didn't think it was great. Kind of right down the middle. I think this story had a lot of potentials that was missed out on. Definitely a book you'd have to read to know if you'd like it or not. A unique premise with untapped potential.

Liz has been concocting stories as long as she can remember, and from the beginning they involved two people falling in love.

When she's not writing, she spends her time rooting for the UW Badgers and the Green Bay Packers (or yearning for the return of football season), cross-stitching and embroidering sassy sayings or nerdy characters (Wonder Woman is her favorite), and drinking too much Diet Coke.

She lives in Milwaukee, WI, with her husband, two kids, two cats, and a turtle.