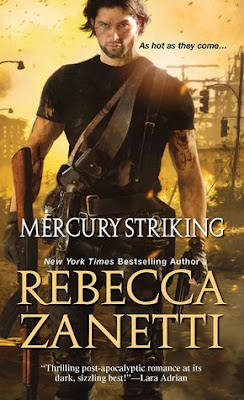 Blurb:
With nothing but rumors to lead her, Lynne Harmony has trekked across a nightmare landscape to find one man—a mysterious, damaged legend who protects the weak and leads the strong. He’s more than muscle and firepower—and in post-plague L.A., he’s her only hope. As the one woman who could cure the disease, Lynne is the single most volatile—and vulnerable—creature, in this new and ruthless world. But face to face with Jax Mercury…

Danger has never looked quite so delicious…

Reese's Reviews:
Hot dang this book was absolutely awesome. Mercury Striking is nothing like I expected, it’s seriously unique and amazing, so glad I grabbed this beauty.

If you don’t know I have a deep appreciation for Rebecca Zanetti’s books. Her books are addicting beyond belief, absolutely beautiful and compelling.

Lynne Harmony and Jax Mercury are some of the most intense characters I’ve ever read. After an epidemic broke out by a deadly bacteria known as the Scorpius Bacterium. Most of the population has been wiped out, some have gotten the disease and survived, while others turn into Rippers. Rippers are “people” who have turned into sociopaths or have advanced abilities. The world isn’t looking so great for survivors. There is very little technology, and no one it safe because resources are running out.

The first person to contract the disease was Lynne. Lynne was once one of the most renowned microbiologists working with the Scorpius bacteria. In an effort to fix her with multiple experiments, Lynne now has a blue heart and the entire living world looking for her. Lynne finally escaped captivity and went out looking for Jax Mercury, the only one who can help her.

Jax is an ex-special forces soldier and ex-gang member in LA. He’s now the leader of the rebel territory in LA. Jax doesn’t want to be a leader, he just wants to survive. When Lynne Harmony the most wanted woman alive comes asking for his help his whole life is flipped upside-down. Now he’s counting on Lynne to find a cure and in exchange, she asks him to kill someone for her.

Seriously this book is beyond amazing. I couldn’t put it down for a second. Jax is ruthless and comes across as very uncaring and harsh when he really just wants to do what’s best for his people. Lynne is so absolutely sweet and she’s such a survivor no matter what’s thrown at her. When she finds Jax the people he lives with view her as a virus and I love how she’s so strong and fierce despite all of that. The romance in this story was hot, but I like that it didn’t overtake the book. There was an actual story and I think Rebecca Zanetti always does such a great job at balancing the sexiness with the actual story so neither are lost.

I cannot wait for the next book! Super excited because this book is beyond beautiful!!! If you enjoy high suspense action stories with romance, phenomenal writing, and kick-a** writing you’ll want to grab this beauty.

Rebecca Zanetti is the author of over forty romantic suspense, dark paranormals, and contemporary romances, and her books have appeared multiple times on the New York Times, USA Today, Amazon, Barnes and Noble, and iBooks bestseller lists.  She lives in the wilds of the Pacific Northwest with her own Alpha hero, two kids, a couple of dogs, a crazy cat…and a huge extended family.  She believes strongly in luck, karma, and working her butt off…and she thinks one of the best things about being an author, unlike the lawyer she used to be, is that she can let the crazy out.