SAVAGE OF THE SEA by Eliza Knight Blitz

series, Pirates of Britannia: Lords of the Sea. SAVAGE OF THE SEA features a daring pirate
brotherhood, high-seas adventures, and unforgettable romance... 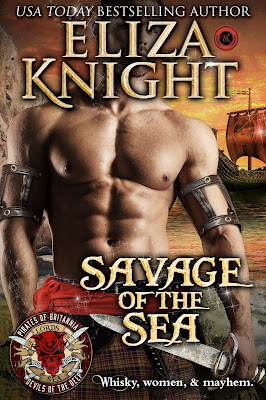 Synopsis:
When Highland pirate prince, Shaw “Savage” MacDougall was invited to a deadly feast, he didn’t know that saving a wee lass would forever change his future.

Lady Jane Lindsey, widowed at a young age, seeks refuge from her departed husband’s vengeful enemies. For five years, she’s held a secret that could cost her everything, including her life. When her safety is compromised, she reaches out to the only man who’s protected her in the past, and offers him a bounty he cannot refuse.

Shaw’s life is perfect. Whisky, women and mayhem. He wants for nothing—until Lady Jane presents a treasure he’d never considered possessing. Is he willing to risk his lethal reputation in order to save a lass he barely knows, again? Will she trust a pirate to see their arrangement through to the end? And what happens when perilous battles turn to sinful kisses? Who will save them from each other? 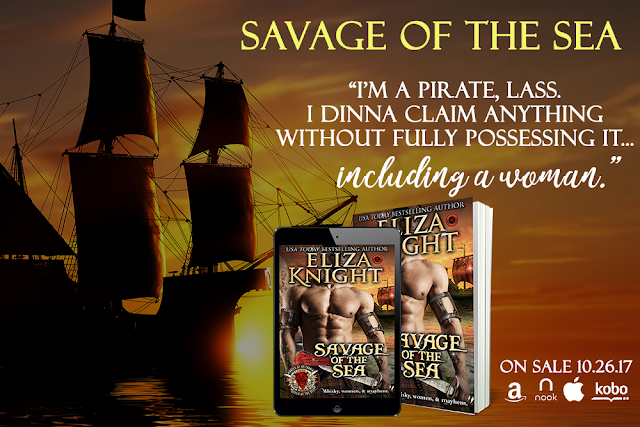 An excerpt from SAVAGE OF THE SEA
Copyright © Eliza Knight 2017


No more of a coherent thought other than she’d never been kissed like this before went through Jane’s mind. She should slap him, push him away, at the very least demand to be put back on her own feet and a good measure of space put between them.


But she did none of those things. Instead, she found herself winding her arms around his neck, parting her lips and sighing against his demanding lips. The spicy-salty scent of him surrounded her, doing something wild to her senses. Suddenly every part of her felt alive with a tingling fire that only seemed ready to burn hotter.


Parting her lips seemed to be a wicked invitation, for as soon as she had done it, his devious tongue swept along the open seam causing her to gasp.


Oh, sweet heavens, but that felt even more divine. Just that little lick sent a jolt rushing through her. And before she could catch her wits from it, he’d done it again, and again, and then her own tongue was reaching forward to test it out. She touched the tip of her tongue to his and could have been struck by lightning, so massive was the force of current that went rushing through her.


This was wicked, oh, so very wicked. And yet, she couldn’t make herself stop.


And did she have to? She’d given herself to this man. Had agreed to share his bed in exchange for him vowing she was his, a marriage that may end up being a total sham for all she knew. But that didn’t change the fact that she’d agreed to it, that in order to be saved from Livingstone, to keep the rightful king safe, she had invited this pirate to lay claim to her.


Lay claim to her, he was. There could be no doubt about it, the way he owned her body at that moment. She couldn’t move. He had her completely enthralled. Completely captivated. Intoxicated.


It was he who pulled away first. He who stared into her bemused eyes with a satisfied expression that she would have found overly irritating if she wasn’t so busy trying to find her bearings.


Shaw set her down on her feet and grinned at her as though he’d plucked a tart straight from her fingers and devoured it.


“I hope that satisfies your need,” she murmured, “for sealing deals.”


He chuckled then, a sound that caressed her nerves, but did very little in the way of calming her. In fact, it did quite the opposite. She licked her lips, trying to avoid looking at his mouth as she wanted him to very much kiss her once more. He might have set her down on her feet, but she was barely standing on her own. Every line in her body reached for him, wanting more of what he’d just given her.


“That was just a taste, love, of what satisfies, but not nearly enough.”


“Shall we do it again then?” she asked in challenge, then felt the heat rush to her face for having spoken so boldly.


Shaw’s darkened gaze swept over her, bold and devilish, and right along with it her body quivered. He wanted her. And she… wanted him.


“Oh, sweet Jane, we shall do it again many more times.” 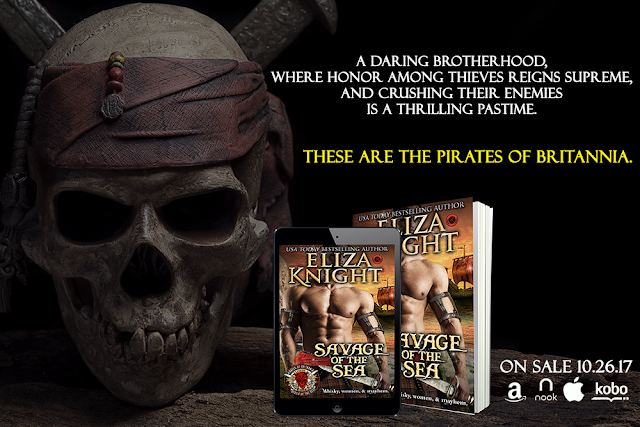 One (1) lucky winner will receive a Celtic jewelry box plus a signed print copy of  SAVAGE OF THE SEA! To enter, simply fill out the Rafflecopter below: 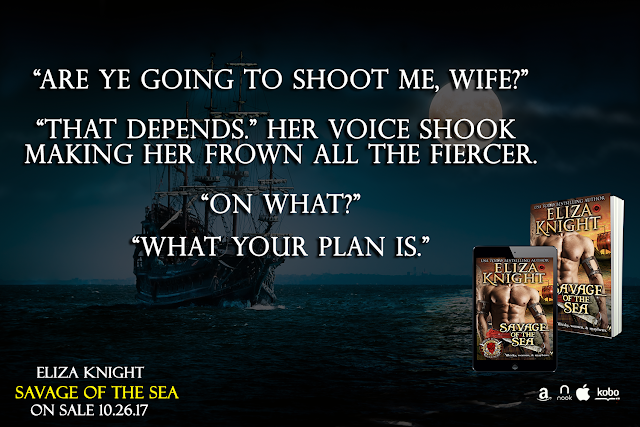 Eliza Knight is an award-winning and USA Today bestselling author of over fifty sizzling historical, time-travel and contemporary romance novels. Under the name E. Knight, she pens rip-your- heart-out historical fiction. While not reading, writing or researching for her latest book, she chases after her three children. In her spare time (if there is such a thing…) she likes daydreaming, wine-tasting, traveling, hiking, staring at the stars, watching movies, shopping and visiting with family and friends. She lives atop a small mountain with her own knight in shining armor, three princesses and two very naughty puppies.