BRANDED BY FIRE by Danielle Annett

If you love Buffy the Vampire Slayer then you’ll love Aria Naveed. Kicking butt and saving people is kind of her thing. 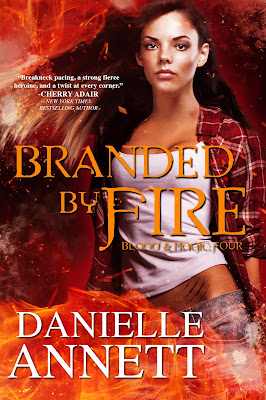 Lovers of Urban Fantasy and Paranormal Romance do NOT want miss out on Danielle Annett’s BRANDED BY FIRE.  You must see why Cherry Adair calls BRANDED BY FIRE a novel with “[b]reakneck pacing, a strong fierce heroine, and a twist at every corner”!
Synopsis:
Aria Naveed can’t decide what’s worse—being mate-bonded to Declan Valkenaar, the Alpha of the Pacific Northwest Pack, or owning up to the fact that she’s developing feelings for him.
Her bond to Declan is the one thing keeping her grounded and preventing her new power from destroying everything and everyone around her.
If Aria doesn’t tread carefully, especially where her heart is concerned, she’ll learn the hard way that if you play with fire, you'll always get burned.


Add Branded by Fire  to your GOODREADS TBR pile!


My hand glistened in the low light, the sheen of blood coating my palm reflected off the light fixtures in the basement of the Compound. I wrapped my arms around my shivering body and tried to ignore the blood now seeping through the thin cotton of my shirt. It was sticky, cold, and black.
Not human blood, I reminded myself.
The moment when I’d found Daniel’s body flashed through my mind. The feeling of cold and congealing blood seeping into my jeans still haunted me. I shuddered.
This time, it wasn’t innocent blood coating my hands.
I looked down at Irina’s undead heart inches away from my booted feet. I’d dropped it.
Glaring down, anger fueled my temptation to kick it.
I refrained just barely.
Needing to look away, I turned to Irina’s motionless form in the rogue cage. Her alabaster skin was starting to sink in on itself and her vibrant red hair seemed to have dulled in color though I knew that wasn’t actually possible.
I looked back to the undead heart beside me, satisfaction filled me. She’d deserved to die. She’d killed him, an innocent seven-year-old boy.
Blackened blood seemed to ooze out of the dead organ and temptation finally won out as I nudged the heart with my boot none too gently. A dark smear of thick liquid darkened the black leather. Definitely not a figment of my imagination, not that I wanted it to be.
Things just weren’t adding up.
I tried to shake the fog from my mind.
“What happened after you were abducted?” Declan’s voice called out.
I whirled around to see him cloaked in shadows. Shit, I’d forgotten he was in the room.
I dug my fingernails into the palms of my hands. I didn’t want to think about that. I didn’t want to remember my body strapped down to a cold metal table, needles in my veins and machines blaring in my ears. The sterile scent of antiseptic had filled the room and I’d been connected to Irina and Aiden through a series of IV tubes. Her vampiric blood sustaining me while Aiden used his telekinesis to try and rip my fire from me.
My mother had just stood there and watched.
My entire body began to vibrate beneath the surface of my skin and I scrubbed my hand over my face.
What the hell had happened?
I looked at Declan and could only shake my head.
My memories were muddled. Noah Thorne, the South Atlantic Alpha had kidnapped me, the bastard, and he’d handed me over to my mother. My life was so fucked up.
I rubbed my hand over my neck, searching for the point where the syringe had punctured my skin but all I felt were twin scars slightly raised where my neck met my shoulders. Remnants of Declan’s bite when he’d mate claimed me.
I didn’t need to think about that, not right now. 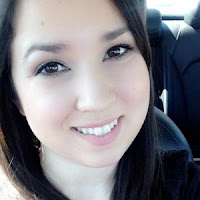 Danielle Annett is a reader, writer, designer, and the blogger behind Coffee and Characters. Born in the SF Bay area, she now resides in Spokane, WA, the primary location for her Blood & Magic series. Danielle writes about kick butt heroines in volatile settings and like her, most of them have some level of addiction to coffee.
When not writing, Danielle can be found hanging out with her two children whom she fondly refers to as her little monsters, or catching up on the latest episodes of Grey’s Anatomy and Game of Thrones.