As she hunts for a drug lord killing her fellow witches, all Tessa Lansa’s instincts point to the Grizzly motorcycle club. That might be because their leader, Bear, is the strong, silent shifter type: warm brown eyes and more muscle and alpha male than any woman can ignore. Which makes Tessa’s plan to seduce and betray him all the more dangerous…


Bear doesn’t trust the curvy, blue-eyed witch. But Tessa can heal the injuries that sap his strength. And since he can’t stop thinking of her lush body and teasing smile, her plan to mate him to reclaim her own power is highly tempting. Just one problem. Once a desire this wild is loose, no one will ever control it… 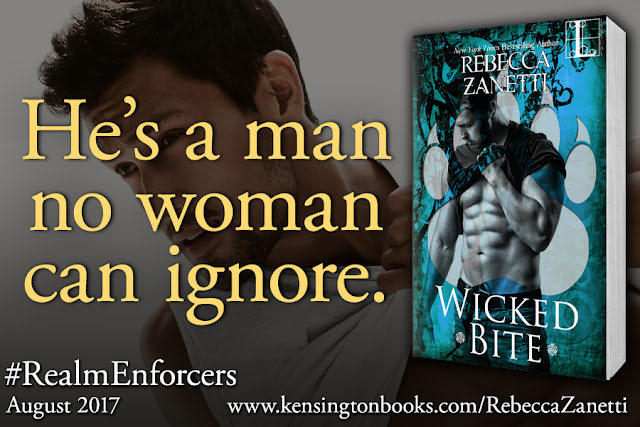 
Somebody was in his cabin. Beauregard McDunphy lumbered around the side of the modest wood structure, his fur rippling in the wind, his big paws leaving tracks in the wet dirt. At one point, not too long ago, he’d been bigger than any bear in the area—shifter or animal. Now he was merely normal size. Yet he could still take a human trespasser without much effort. He lifted his snout, and the fur rose down  his broad back.
He was a loner, and he liked his privacy, so anybody who even remotely knew him understood to stay the hell out of his space. What was that smell?
Irish roses and something . . . female. The scent of woman. He growled,  the sound hollow.
Who the hell was in his cabin? He stalked toward the front door, which remained open. Oh, he was going to scare this interloper. He sucked in air to snarl, rolling his neck so he could fully flash his canines.
A woman came into view, turning around, skirt rustling. “There you are.”
He paused and studied her. Thick black hair piled on her head, violet-blue eyes, smooth features. Delicate. Something stirred inside him, and he shook his head, trying to focus. Why wasn’t she scream- ing? Most people freaked out when faced with a grizzly bear. Wait   a minute. He knew her. Didn’t he know her?
She pressed her hands to her hips. Her green houndstooth de- signer suit looked like something out of the fifties. Somehow, it worked on her. “Do you mind shifting back to human form? We need ta talk.”


The brogue. Irish brogue. Pretty eyes. Small stature. Sparks of power  all around her.
It hit him then. A witch. There was a witch in his home. He growled again and set his bones to transforming into his human shape. The process took longer than it should have, considering he’d mainly been in bear form for nearly three months. Three useless months that hadn’t changed a damn thing about his failing health.
Pain lanced down his spine and through his arms. His bones broke and reformed, hurting much more than they should. The fur receded on his arms and then the rest of his body. Agony flared through his face, reshaping it, nearly making him black out. Finally, he straight- ened, his body elongating. He kept his expression stoic and tried to banish  the ache.
“That looked painful,” she whispered, her gaze soft on his face. “It was,” he responded before he could think. Then reality crashed
back. “Why is there a Coven Nine witch in my fucking cabin?” His safe cabin in the Seattle wilderness where witches and the Coven Nine couldn’t get to him. What was her name? He couldn’t place it. Everything was cloudy. Yet he remembered seeing her in Ireland at witch headquarters—she was a council member. When was that? Months ago.
She hummed and looked around, her gaze high and a light pink dusting  her cheekbones.
He settled his stance. His human brain kicked back in. “As a member of the Coven Nine, what are you doing here?” She was on the ruling council of witches, and she should have security all around her. His back stiffened, and he turned to scan for threats.
“I’m alone,”  she said.
That was impossible. Yet even with his senses returning, he couldn’t find any other people near, much less any witches. “Why?” he barked. His voice was rough and hoarse from disuse.
She blew out air, her pretty lips pursing. Her gaze rose nearly to the rough wooden ceiling. If she craned her neck up any more, she might  fall backward.
Bear frowned. “What the  hell?”
She cleared her throat. “Do you, ah, do you mind?” Her hand swept  out, even  the small movement graceful.
“Mind what?” he snapped, glancing over his shoulder again. Trees


and silence met his gaze. Thunder ripped above, and an angry autumn rain began to slap the ground. Summer had given up the fight, and the oncoming winter scented the breeze. He stepped inside the cabin.
She backed up so quickly her butt hit the ancient stove, and she gave  a startled eep. “Please, Mr.  McDunphy.”
What in the world was wrong with the woman? “Please, what?” Was  this some kind of trap?
“Put some clothes on,”  she said through pearly-white  teeth.
He started and looked down at his naked body. “Oh.” Clothes were such a damn annoyance. “Uh, okay.” A small dresser sat by the bed, on the north wall. He moved past the raggedy sofa and modest fireplace to yank out a pair of faded jeans. He struggled into them, wincing as he engaged the  zipper.


Life was so much easier as a  bear. 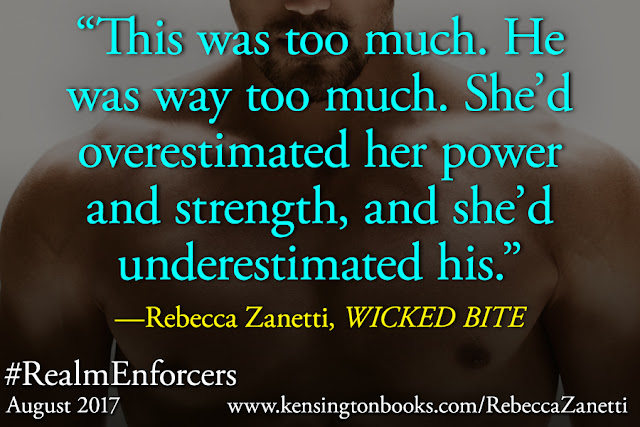 New York Times and USA Today Bestselling author Rebecca Zanetti has worked as an art curator, Senate aide, lawyer, college professor, and a hearing examiner - only to culminate it all in stories about Alpha males and the women who claim them. She writes contemporary romances, dark
paranormal romances, and romantic suspense novels.

Growing up amid the glorious backdrops and winter wonderlands of the Pacific Northwest has given Rebecca fantastic scenery and adventures to weave into her stories. She resides in the wild north with her husband, children, and extended family who inspire her every day—or at the very least give her plenty of characters to write about.

Follow the tour HERE for exclusive excerpts and a giveaway!
a Rafflecopter giveaway