Have You Pre-ordered TAMING THE LION by Kerry Adrienne Yet?


Synopsis:
Pack bonds are tested in the Shifter Wars as the lion heir must choose between his legacy and his mate
For Marco, heir to the lions’ throne, seizing control of the Cave of Whispers from the bear clan is more than just a quest—it’s fulfilling the legacy of his breed. But the latest crusade has left Marco gravely wounded in enemy territory and in the hands of Alicia, healer for the bears. An irresistibly sensuous adversary, Alicia presents a serious problem. She carries the scent of a mate.
Drawn to this dominant master of his den, Alicia knows her allegiance has been compromised. His brooding sexuality is testing her defenses, but falling in love with Marco means falling in league with a rival shifter. And turning her back on the bears in a time of war is a lethal move.
Two breeds united by destiny could inspire a peaceful new future for their opposing clans—or ignite the fiercest battle yet and destroy all of Deep Creek forever. 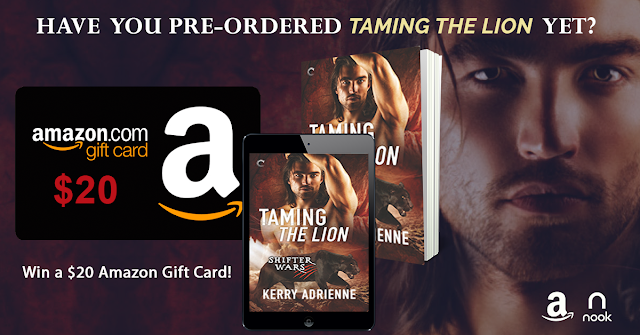 Enter to win a $20 Amazon Gift Card from Kerry Adrienne!


Taming the Lion Excerpt
Copyright © 2017 Kerry Adrienne
“Let’s do this.” Alicia wiped the sweat from her forehead, tugged her medic pack higher on her shoulder, and trudged deeper into the forest, away from the cave.
Every muscle burned and her head throbbed. Surely she’d found all the wounded bears by now.
Can’t take a chance I’ve missed anyone. Too many lost already.
Once she was positive all bears were accounted for, she’d collapse into bed. But until then, she’d search. The air hung heavy with the dank odor of battle, dried blood, and the ghosts of violence. A full day had passed, but Deep Creek was forever scarred from the agony that had ripped shifters apart on its forest floors.
Healing would take more than bandages and incense.
Damn lions. Always looking for a fight. The bears wouldn’t forget the day the lions attacked.
“Alicia?” The voice sounded from behind her, a hint of agitation in the tone. “Where are you going?”
She paused, steeling herself, and then turned.
Derek.
Concern clouded his face. Rarely one to show stress, the battle had shaken him profoundly, and deep hollows had formed under his eyes. Shell-shocked, yet still the strong alpha always concerned about those he cared about. Bria was fortunate to have such a powerful protector as mate.
“I’m checking for wounded.” Alicia pushed a lock of red hair behind her ear and cinched her ponytail. The after-battle taste of nausea and heat burned her throat and sat in her stomach like a rock. She didn’t need to hear Derek’s speech, but she knew it was coming.
“Alone?” He put his hands on his hips.
“I’ll be back before dark—there are several hours of daylight left.” A tingle of dread traveled up her spine. Though she loved being a medic and healer, battlefield trauma treatment was a bit beyond her training.
“You shouldn’t be by yourself. The lions might be prowling around looking for their own wounded. Or a stray bear to ambush.” Derek’s hair hung loose and limp around his shoulders. His beard was scraggly and he had a dark bruise over his eyebrow.
She’d never seen him look so rough.
Of course he’d try to stop her. He wasn’t being bossy. He worried. “I need to check thoroughly. Just in case.” He wasn’t the only one who worried, but she’d never forgive herself if she missed a wounded bear.
He tromped toward her, his steps heavy with exhaustion. “I’ll help. We’ve lost too many friends and family already. I’m not losing you too.”
“There’s nothing you can do to help.”
He stared into the forest and sniffed the air. “I can shift and we can cover more ground.”
“Go back to the cave. I’m sure Bria needs you right now. She’s been exposed to so many new things, some violent, in a short amount of time. I know she’s a strong woman, but it’s a tremendous amount for a human to process. She’s been thrown into the middle of this war, unprepared.”
Derek scowled. “I know.”
She touched his shoulder and looked into his eyes. “She needs you by her side, not left alone with a bunch of grumpy and wounded bears.”
He pulled away. “But she’s safe in the cave. You aren’t.”
“Seriously?” Alicia crossed her arms and formed the sourest face she could fake. “You really think I can’t take care of myself? I’ve been doing it a long time.”
“It’s not that.”
“Then what? The lions have gone home with their tails between their legs.”
“I worry about you.” His voice softened.
“I know you do, and I appreciate it. I’m going to check the brush on the way to the creek then I’ll be back. I won’t be gone more than an hour or two.”
His scowl deepened, and he chewed his lip hard, annoyance flashing in his features. “You’re so stubborn.”
“Your mate needs you. Go.”
She almost smiled, but held back. It was easy to see why Bria was attracted to Derek. He’d always been a good friend, looking out for Alicia as they grew up together in the clan. Sometimes he was overprotective, but she understood why most women swooned over him.
Who didn’t want a giant bear hug from a good-looking and sweet man?

Other Books in the Shifter Wars Series