Review: An Ember of Ashes by Sabaa Tahir 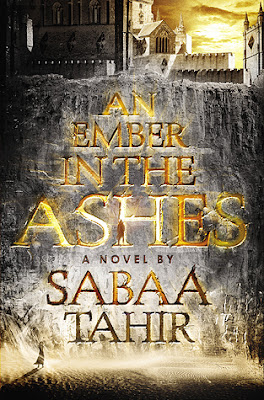 
Blurb:
Laia is a slave.

Elias is a soldier.

Under the Martial Empire, defiance is met with death. Those who do not vow their blood and bodies to the Emperor risk the execution of their loved ones and the destruction of all they hold dear.

It is in this brutal world, inspired by ancient Rome, that Laia lives with her grandparents and older brother. The family ekes out an existence in the Empire’s impoverished backstreets. They do not challenge the Empire. They’ve seen what happens to those who do.

But when Laia’s brother is arrested for treason, Laia is forced to make a decision. In exchange for help from rebels who promise to rescue her brother, she will risk her life to spy for them from within the Empire’s greatest military academy.

There, Laia meets Elias, the school’s finest soldier—and secretly, its most unwilling. Elias wants only to be free of the tyranny he’s being trained to enforce. He and Laia will soon realize that their destinies are intertwined—and that their choices will change the fate of the Empire itself.

Reese's Review:
Holy smokes this book is off the charts awesome. I will try and give you the goods without gushing too much, but no promises.

Laia and Elias are our main characters and protagonists. They both want freedom from the Empire. The Empire is brutal and uncaring. Elias and his friends are all Masks, one of the most brutal forces the Empire has to destroy their enemies. The Masks are trained killers and have been trained to kill since they were children to be soldiers. Only Elias doesn’t want to be a Mask, he wants to leave. Laia is a Scholar who’s parents and sister have been killed. One night the Martials who are part of the Empire came looking for Laia’s brother, took him prisoner and killed her grandparents. Now Laia is on her own trying to find the Resistance- the only group going against the Empire able to get her brother out of jail.

Okay I won’t give any more away but I will say Laia’s and Elias’s lives cross paths and while at first I thought this story was going to be a simple the two characters meet and slowly fall in love kind of story it so totally wasn’t.

An Ember of Ashes is just astounding. There are so many characters and no matter how little a role they played they all have an impact on the story. I seriously loved this book. Each character had their own story but it wasn’t overwhelming. The evil characters who are so easy to hate even have their own story and you sympathize with them, not enough to change the fact that they’re evil, but I like that they weren’t just evil to be evil.

This is the type of book you have to sit down and just read. Once you start reading it’s very difficult to put down, even for food. The pacing is amazing. It wasn’t fast, but it was slow either. I left me NEEDING to know what was going to happen next with every page.

Laia isn’t the perfect character at all, but she grows so much. I like how she wasn’t perfect. She got scared and failed a lot and got hurt a lot, but became stronger for it. Laia is very young and naive about a lot, but doesn’t let that stop her. She has a lot of inner struggles with being strong. When she gets friends she becomes super loyal and doesn’t leave them behind. I really can’t wait to find out where her story takes her. Major character growth.

Elias is super awesome too. I like how realistic he is and how strong he is. All he wants is to get away from his life of killing and to not become heartless. I think he holds true to that throughout the entire book. Sometimes he lost his way, but he stayed true to himself and tried to do what was right.

Now there are hints of romance in this book but it didn’t overtake the plot. Elias and his partner and Laia and a resistance member all kind of dance around each other throughout the story. It’s a slight love triangle but nothing concrete. I think we’ll have to wait and see who ends up with who, if anyone. CANNOT WAIT UNTIL THE NEXT BOOK!!!! 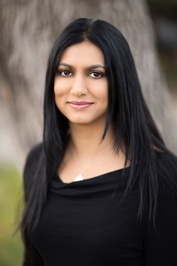 Spent my childhood in the Mojave Desert, where I didn’t have cable and thus chose to entertain myself with books and radio. My parents assured me that I wanted to become a doctor, but a brief stint working in a hospital changed my mind.

I left the desert for university at 17, graduated from UCLA a few years later, and went to work for The Washington Post directly after. Five years later, I left the Post and started working on a book.

If I could be anything, I’d be a space explorer, but a cool one, like Jean-Luc Picard.

Those are the basics. If you’re still burning with curiosity, here’s more: