Pack bonds are tested in the Shifter Wars as the lion heir must choose between his legacy and his mate. 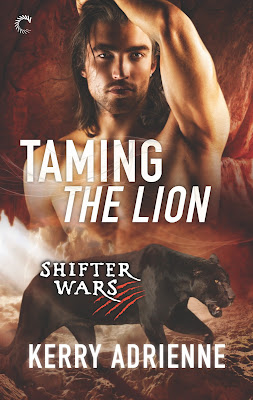 
For Marco, heir to the lions' throne, seizing control of the Cave of Whispers from the bear clan is more than just a quest—it's fulfilling the legacy of his breed. But the latest crusade has left Marco gravely wounded in enemy territory and in the hands of Alicia, healer for the bears. An irresistibly sensuous adversary, Alicia presents a serious problem. She carries the scent of a mate.
Drawn to this dominant master of his den, Alicia knows her allegiance has been compromised. His brooding sexuality is testing her defenses, but falling in love with Marco means falling in league with a rival shifter. And turning her back on the bears in a time of war is a lethal move.
Two breeds united by destiny could inspire a peaceful new future for their opposing clans—or ignite the fiercest battle yet and destroy all of Deep Creek forever.
Add to your TBR list:  Goodreads 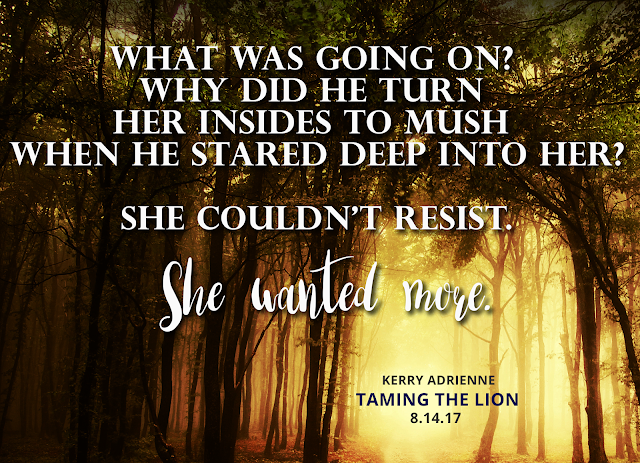 An excerpt from TAMING THE LION
Copyright © Kerry Adrienne 2017

“Go away.” His voice barely a whisper on the thick summer air. “I’ll kill you.”


Alicia gripped the scalpel. She could slide it across his neck in a flash, and it’d be over. No one would have to know. A mercy killing, of sorts. Though she’d be lying to herself to categorize it as such.


Her grandmother’s words echoed. Alicia was a healer, not a killer.


From the looks of the lion’s shirt, already dark, yet now wet with blood, he might not recover even with her best efforts to save him. The scent of gunpowder and burnt flesh peppered the blood-laden air. The lions had left him to die under a bush in bear territory, shot in the shoulder.


She shook her head and settled to the ground on her knees. “I’m not going anywhere.” The strength of her voice hid her fear, though he might sense it anyway. His scent was that of a strong and confident shifter, even in his current state.


He looked at her.


She blinked, trying to calm the adrenaline rush that shot through her. His eyes, mesmerizing and wide, lured her in, and she couldn’t turn away. Deep green or maybe brown or even both, they were a color she’d never seen and his gaze was magnetic. Her mouth went dry.


He was her sworn enemy. Sexy, but injured.


She glanced to the sky, but didn’t see Grandmother Hawk. Typical. Recently, she’d started leaving Alicia to figure out the moral decisions on her own, trusting that she would make the right one.


Part of the training.


“Shit.” The scalpel had warmed in her hands, and the sun glinted off the blade in a flash of silvery-white. What would her grandmother do? No doubt, she’d help the lion. Maybe she wouldn’t tell the bears, who she was loyal to, but she’d never let a lion die if she could heal him. She’d never intentionally let anyone die on her watch.


“War is for the weak minded,” she’d always said. Alicia was beginning to think she was right. Why couldn’t shifters all get along?


Because the damn lions wanted the bears’ territory. If they’d stayed in their own area, none of the bloodshed would’ve happened. Even though Alicia had heard the stories of the lions and bears and wolves sharing the cave, the actuality felt as foreign as items in an ancient history book. As remote as a fairy tale.


“Go.” He turned away, but she could still see the strain on his face as he winced.


His black hair, falling to his shoulders, was damp and matted. How early in the battle had he been wounded? He was bound to be dehydrated.


“I’m here to help. Like it or not.” She slid the scalpel into its sheath and back into the pocket of her pack. Her earlier assessment was correct. The lion was no threat at the moment. He could barely move. The rise and fall of his chest showed his respirations were high and labored. Blood loss was nearing the severe level.


He needed help before his body went into shock.


She looked back toward the trail to make sure she was alone. If Griff or Derek found out about him, the lion wouldn’t need help anymore and her time as medic would be over.


She’d worry about that another day. She had a lion to save. 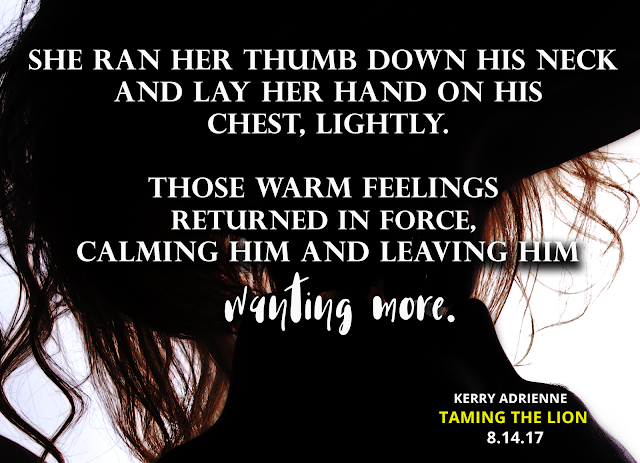 One (1) lucky winner a $25 Amazon Gift Card! To enter, simply fill out the Rafflecopter below: 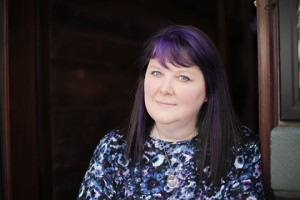 She loves history, science, music, and art and is the mom to three daughters, many cats, and various other small animals. She loves live music and traveling most anywhere. In addition to being an author, she’s a college instructor, artist, costumer, editor, and bad guitar player.
Connect with Kerry at: Website | Blog | Facebook | Twitter | Amazon


Please add Barclay Publicity’s button at the bottom of your post and/or on the side column of your blog and link it back to http://www.barclaypublicity.com: