For the Love of a Widow ~ Release Blast

A widow scarred by love and loss…A lord determined to save the woman he loves. Can they trust each other to heal the wounds of their past to find a love that lasts forever?

Out in ebook on August 20th – For the Love of a Widow by Christina McKnight – A standalone regency romance. 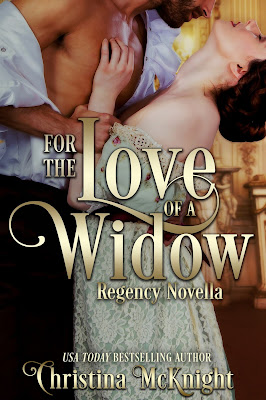 
A widow scarred by love and loss…After years spent following her husband as he fought against Napoleon’s troops, Lady Lettie Hughes returns to London a widow to take her rightful place among the ton as the daughter of an earl. Her parents and friends expect her to enter the Marriage Market and secure the match she should have pursued in her debut Season. But Lettie is not the same innocent girl she was before Waterloo. Nightmares of the battlefield plague her, and she doesn’t see a place for herself in society anymore. A lord determined to save the woman he loves…Daniel Greaves, the Duke of Linwood, is a man who knows rejection and loss. He’s lived the last six years alone, after the woman he was betrothed to cast him aside for another man. Instead of taking control of his title and lands, Daniel fell into a life a debauchery—gaming, women, and spirits. But now the woman who stole his future and left him hollow is back in London.When Lettie and Daniel are reunited, their connect burns as bright as it once did. But neither of them are the same people they were in their youth—they must trust one another to heal the wounds of their past to find a love that lasts forever.


Follow the blast and enter to #win $10.00 Amazon Gift Card
Enter at: http://www.rafflecopter.com/rafl/display/b050ef29400/?
a Rafflecopter giveaway
Posted by Reese's Reviews at 1:00 AM