Welcome to my first post in Comic Corner. I created Comic Corner to bring my love of all things comics to my blog. These posts will feature different comic type things like trailers, movie reviews, History of different characters and so on. 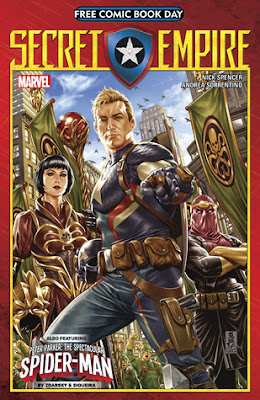 
Blurb:
The Marvel Universe is under siege from within! Captain America, secretly a true believer in the cause of Hydra, has turned his back on the Super Hero community. Using the trust and respect he has gained over the years he has ascended to a position where he can enacts Hydra's ideals. The death of Jack Flag, the trial of Maria Hill, the second Civil War, the alien Chitauri Queen. All of the dominos of Captain America's plan have been laid out – and it will take only the slightest push to set them into action! Now, the Avengers, the Champions, the Defenders, the Guardians of the Galaxy, the X-Men and more will be tested. As Hydra's grip tightens around the Marvel Universe, the heroes stand at the precipice of an unprecedented challenge. How will they Marvel Universe cope with this shattering betrayal by the most trusted among them?

Reese's Review:
So the event surrounding Secret Empire has been brewing for some time. In the Secret Empire, Comic #0 which is like the prequel to the whole story is kicking off the event in a big way. The only way I could think to explain how this works in comic book land is that there have been a bunch of stories circling around Secret Empire and then we get a spin-off story or we come to the big reveal in the story where secrets are revealed and so on. In the #0 issue of SE, there is a huge battle going on with the superheroes and Hydra. Now if you’ve seen any of the Marvel movies around Captain America (Captain America: the First Avenger and CA: Winter Soldier) you’ll have a good idea as to who Hydra is. Now if you’re just tuning into these reviews I’ll give you a tiny recap of what has been going on with the Marvel universe. The director of SHIELD created a place (Pleasant Hill) for villains to have their memories wiped and for them to be good people. She did this by using a sentient being called Kobik which is a cosmic cube, who rewrote everyone's memories of who they were.

This eventually didn’t work and there was a riot and Captain America (who was old at the time) came to help rescue everyone. This is where he meets Kobik and she ends up rewriting his memories and making him young again. Kobik had already been manipulated by the Red Skull and so she made Captain America into Hydra. There are a lot of things that come after this event, but the main thing is Captain America is evil and Hydra. During the events between Pleasant Hill and Secret Empire, he does a lot of very bad things.

Now enter SE #0: The superheroes are fighting Hydra when suddenly the head of Hydra is revealed to them to be no other than their close friend Steve Rogers. He pretty much wipes everyone out and then takes hold of Thor’s hammer. Now again if you’ve been paying attention to any of the Marvel movies, particularly (Thor and Avengers: Age of Ultron) you’ll know how important it is that he picked this up. This move ends up swaying a good portion of the good guys to become Hydra.


I felt SE #0 was the perfect kick off to this event. The artwork is so cool and looks like an American flag with the colors being faded out to (at least to me) symbolize the big reveal that’s coming with Cap and having the colors sort of muted kind of shows how Caps, not Cap anymore in a way. Great story and I can’t wait to find out what happens next.
The story was great and fast paced. I love the artwork in comic books and trades. When I first started reading comics it was the most overwhelming thing. It’s like picking up a 5,000-page book and starting at the beginning. I’m a huge reader and the vast majority of the books I read have no pictures, let alone color after I open the cover. It’s overwhelming, to say the least, but so worth reading once I got the hang of it.