Skylar Clarke has sworn off bikers. But Abner Travis, leader of the local motorcycle club, is the one thing she can’t resist. 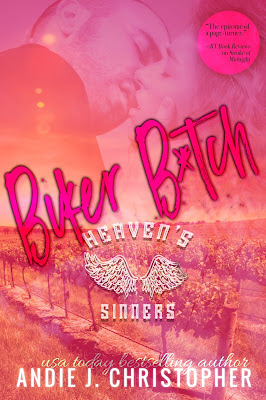 Synopsis:
Skyler Clark knows she'll have to face her past when returns to the Russian River Valley to make pinot noir. People in the small town where she grew up haven't forgotten her father – a country doctor turned outlaw motorcycle club president – and his fall from grace. But as long as she keeps her own business squeaky clean and stays away from bikers, she'll be fine.

Abner Travis sold his family's vineyard and winery to build up his business. And he's the president of a clean motorcycle club that does things the overburdened sheriff's department can't. He's too busy making sculptures for Hollywood directors and quietly sabotaging meth labs to chase a woman. But now that Skyler's all grown up, he wants her for his own. He just has to convince her that their dark, shared history shouldn't get in the way.

Travis is the one thing Skyler can't resist, but she doesn’t believe they can last. When her father's old club puts Skyler's business and safety at risk, she has to decide whether to place her trust in Travis or to walk away. And Travis has to decide how much he'll give up to keep the woman he loves.

Warning: Contains a dead sexy biker who will pull on your pigtails, but only if you beg.

She looked around as if she was afraid someone would see her. But all the workers lived off site. Any migrants she’d hired to pick the grapes wouldn’t be there for months. There was no one on the property except for the two of them.
“You heard me.” He could hear the edge to his voice. If he was a good guy, he’d talk to her softly, soothe her, tell her he trusted her, and carry her into the trailer and make sweet, gentle love to her.
But that’s not what she wanted. It wasn’t what got her so wet and soft under him. He stepped so close he could feel her breath against his throat. It was rapid, and she looked up. She uncrossed her arms and touched his wrists. He shook her grasp and reached around to the back of her dress.
He moved her hair over her shoulder and blew on the tiny little hairs at the back of her neck. She shivered, but otherwise remained still. The moment was ripe and even the birds and small animals went silent.
Nothing but stars and moonlight and them.
They were alone in the universe, and she belonged to him. She might move on to someone who could offer her more, but he’d always have her like this. When she’d married some rich friend of Michael’s, he’d have her like this.
He wanted to see her naked under the moonlight. When he drew down the zipper, he saw gooseflesh rise where the air hit her skin. She felt it, too. He pulled the dress over her shoulders and bared her to the waist except for the pearls and another lacy bit of nothing.
He flicked the pearls, and was about to rip the strand off. They just made him think about how good and pure she was. She quickly reached back for the clasp and unhooked them. He took them from her and pocketed them.
With one hand, he unhooked her bra and pulled it off her arms from the front. Her creamy tits glowed under the full moon and her nipples tightened to titanium in the cool night air. He bent down and blew on them.
“Goddamn, you have pretty tits.”
She just moaned because he picked her up by the arms and put her down on the flatbed of her truck. He reached for a blanket and tucked it under her ass. Though he wanted to savor the moment, he didn’t have the patience to go easy. The rusty flatbed would scrape up the soft skin on her thighs.
The push-pull of his feelings when he was with her was what made this thing between them compelling. He was always in control, except when he was around her. He liked surrendering to his instinct to mark, to have to mate when they were together.
She sat on the back of her truck with her dress around her waist and her boobs almost up at mouth level. He couldn’t let an opportunity like that go to waste. He bent down and took her nipple between his teeth, gently abrading it until it got even harder and she whimpered. She laced her fingers into his hair and pulled it half-loose. Her fingernails dug into his skull; he loved that little bite of pain that let him know she wanted this just as much as he did.
“Harder.” Her voice sounded like it was a half moan, and he wasn’t about to deny this woman anything she asked for, especially if it was something he wanted to give her. He moved to the other nipple and lifted her up to pull her dress down over her ass. When he got it free of her legs, he threw it on the sparse grass.
As good as she looked, he hoped the dress got ruined. It symbolized everything that would take this woman away from him.
He drew back his head and stared at her. Her panties matched the white bra he’d discarded somewhere on the lawn. And--Christ almighty—she  had a garter belt attached to stockings. The kind with lace on top.
“Never wear these again unless you’re coming to see me.” He grabbed her upper thigh and ground out the words. “I’m going to fuck you in nothing but these damned stockings and the heels.” 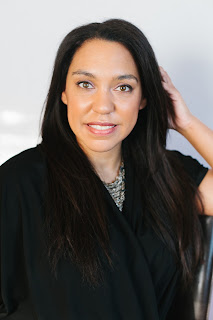 Author Bio:
USA Today Bestselling author Andie J. Christopher writes edgy, funny, sexy contemporary romance. She grew up in a family of voracious readers, and picked up her first Harlequin Romance novel at age twelve when she’d finished reading everything else in her grandmother’s house. It was love at first read. It wasn’t too long before she started writing her own stories — her first heroine drank Campari and wore a lot of Esprit.
Although, she set aside writing fiction for a while, her love of romance novels stayed with her through college, law school, and multiple cross-country moves. During one long East Coast winter, she decided writing a book would be a good excuse to avoid braving the elements. It was love at first write. Her heroes are dirty-talking alphas, and her heroines traded Esprit for Free People. (None of them would turn down a Campari, though.)