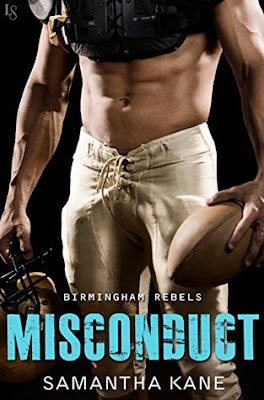 
Blurb:
The Birmingham Rebels play both sides of the field, proving that the hottest action isn’t always in the arena.

Rookie running back Tom Kelly loves the perks of football stardom. Men, women—there’s no shortage of companionship for a pro athlete who’s hot, young, and willing, and Tom is definitely willing. But deep down he wants a committed three-way relationship, especially if the female in the middle is Carmina de la Cruz. The undeniably sexy Army veteran may not say much, but her body speaks loud and clear.
After a traumatic tour in Afghanistan, Carmina is struggling to regain her speech and rebuild her life. More than anything, she wants to feel like a woman again. Tom may be a wholesome All-American, but he knows just how she needs to be touched—and he’s not the only Rebel who arouses her interest. With his scorching intensity, Tom’s best friend leaves her wondering if two players might be better than one.

Danny Smith is no stranger to his team’s kinky reputation. He gave in to temptation once, but he’s not going down that road again. Sure, Carmina’s curves promise pleasure, but her eyes guarantee it comes with baggage—and Danny has enough of his own. Still, giving up control can feel so good. And when it comes to everything Danny craves, Carmina and Tom make the perfect team.

Reese's Review:
After the third book in the Birmingham Rebels series came out I was hesitant to even read the fourth book in this series. However, my faith has been renewed with Misconduct. This story was amazing and I couldn’t be happier that I got this series early.

Tom Kelly discovered he was bisexual during the first book in this series after helping a friend. Now a couple months later after months of promiscuous sex with men and women, he wants to start getting serious with someone(s). His roommate Danny and Carmina a girl he recently met but is falling for rapidly are top on his list of people he wants. Carmina was injured in the line of duty overseas with Sam and now has a brain injury that gives her speech trouble. She has an instant attraction to both Tom and Danny, but after one hot time in the shower together Danny doesn’t want anything to do with Carmina. Danny lives in denial about what he feels for Tom and Carmina since he doesn’t want to want them and he harbors too much guilt and anger over what happened to his best friend.

I loved Misconduct. First, off the issue I had with the last story was that there wasn’t much story and too much sex. Misconduct did not suffer from this issue at all. The whole story was fantastic. There was football, training, character development, and of course super hot sexy scenes. I enjoyed every waking minute of this story. The pacing was just right and I read this in one sitting.

Tom Kelly is a young football player who discovered he was bisexual and went on a sex spree. After having been with one girl his whole life, he felt it was time to let loose a little. I loved Tom’s character. He’s mostly laid back, but during the sexy times, he was completely dominant in all areas. Yum. I enjoyed reading about how he changed and grew throughout the story. I love how he was with Carmina and Danny and how they were with him. Carmina struggled a lot with pretty much everything since she got out of the service. She can’t have an orgasm, she had trouble speaking again, and she lost her family due to pressure from them to get better fast. Danny had a lot of struggles with anger and letting go of the past.

So much fun with this story. I enjoyed it from start to finish.

Other Reviews for this Author: