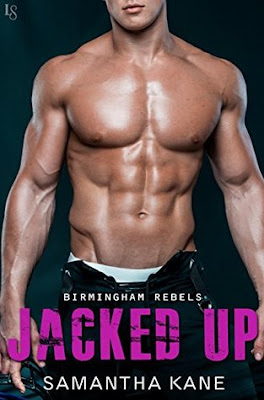 Linebacker Sam Taylor feels like a ticking time bomb. He left the army with emotional wounds as fresh as the scars on his back. Sam’s been living like a monk, but his best friend, defensive lineman King Ulupoka, wants to get him laid. Easy for him to say. The larger-than-life Samoan is a hard-bodied, tribal-tattooed fantasy. Sam agrees, under one condition: King stays to watch.
ER nurse Jane Foster is done being a good girl, and nothing says wild like picking up two of football’s sexiest players and bringing them back to your hotel room. Trouble is, she can’t decide which one she wants more. Sam is hot, sweet, and vulnerable. Jane’s more than willing to ride him into oblivion. But King’s intense gaze from across the room promises that the best is yet to come.

Sure, King has had his choice of girls and guys in the past. That doesn’t mean he’ll jeopardize his relationship with Sam over a case of locker-room lust—until a naughty nurse pushes them both out of their comfort zones. Seeing Jane and Sam together turns King on more than he ever imagined. If they’re game, he’s ready to tackle a three-way play.

Reese's Review:
I have followed Samantha Kane’s Birmingham Rebels series since the beginning. When I was offered a copy of Jacked Up for an honest review I grabbed at it, because I found this series interesting beyond belief.

When going into a new book I try to always keep an open mind. I always try and think happy thoughts like “this book should be good” no matter what. Despite my love for a series I don’t want to put added pressure and expectations on any one book for fear of disappointment. That being said Jacked Up was disappointing to me on a lot of levels.

Sam Taylor and his best friend King Ulupoka are on the Rebels football team together. Sam hasn’t had sex since he got released from the service after a terrible injury. Sam sugars from PTSD and doesn’t want to hurt anyone while having sex. To help him out King told Sam he would be there, in the room, while Sam and the lady of his choosing while they get it on. When they run into Jane Foster there’s an instant connection and the three engage in an amazingly hot and sensual night. That’s all it was supposed to be, one night. Then the Sam and King end up in the hospital for a family member and run into Jane. The three try to work out a relationship while trying to keep it quiet.

Honestly, this story had all the makings for an amazing story. I enjoyed King and Sam a whole lot. Their friendship was adorable and their romantic relationship was sexy. King loves Sam right away and wants to take care of him. Sam despite how he feels, he doesn’t realize what his feelings are right away that he feels more than friendship for King.

Now despite all the negative, I did have some aspects of this book I enjoyed. Namely Sam Taylor’s character. I enjoyed him throughout this story. He’s a war hero who came home to live out his dream because his friends couldn’t. I really enjoyed Sam’s journey and felt like his PTSD and life were realistic and relatable.

Overall, Jacked Up has been my least favorite in the series. I am a little hesitant about reading the next story since Jacked Up was kind of craptastic, but we shall see. Despite the negative, I enjoyed the characters a bunch for the most part. If you are looking for a book with M/F/M sexy scenes and an alright story Jacked Up is for you.

Other Reviews for this author: