Senna Callas’s one-night stand with her alpha asshole boss, Marco Medina, was supposed to mark the end of her internship and their ridiculous attraction. After being unreachable and ignoring Senna for a year, Marco sweeps back into the country and summons her to his office, revealing he knows her secret…the secret created during their explosive night together. 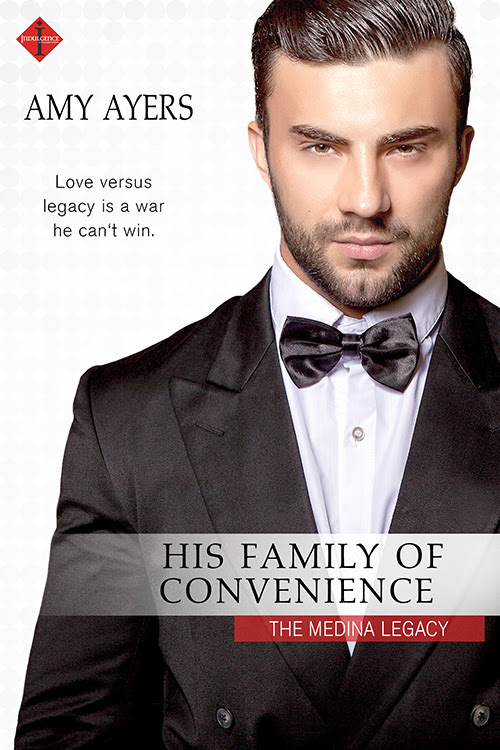 Marco is determined to be there for the son he’s just discovered he has, but when it comes to being with Senna, his choices aren’t his own. His meddling family expects him, the firstborn son, to follow through with the arranged marriage set up when he was a child. And Senna has no plans on being his mistress and still resents how her attempts to contact Marco were ignored. The only thing going right between them is the attraction that burns no matter the complicated situation they’re in.


Marco would do anything to protect his family, anything except decide between the legacy he was born into and the young family he’s just found…

Reese's Reviews:
His Family of Convenience was A-FREAKING-MAZING. No lie I so enjoyed this book. The characters, the story, everything from start to finish had me flipping the pages in rapid succession. Amy Ayers is a new author to me, but she is on my forever love list.

Senna has a one-night stand with her super sexy boss one night at an office party before Senna’s internship ended. Marco had never been attracted to anyone the way he was with Senna and so he wanted her bad. When a family emergency forces them apart Senna assumes he doesn’t want anything to do with her or her son. Now Senna’s life is a daily struggle of keeping the lights on, working two jobs, taking care of her sick grandmother and her son.

Enter Marco: Marco just found out he has a son and he’s ticked. Seriously he barges into Senna’s life pushing her around and demanding things from her time and time again. He’s super rude about it. He thought Senna kept his son from him, which wasn’t the case, but yeah it causes some problems. Marco uproots Senna’s and their sons’ life to his family estate to have Max meet his family. Can we say Drama anyone?

This book was so good. I am definitely going to pick up the rest of the books in this series and any other books by this author because they’re amazing.

Senna has a weakness for Marco and wants a real family like he has and that she never got. At the same time, she’s not going to be Marco’s live in mistress simply because it would make Marco happy. I like that in the end she stands up for herself and does whatever it takes to make sure Max (her son) has the best upbringing he could have.

Marco is a bit of a douche bag in the beginning. He’s used to getting his way and Senna kind of pushes him to understand his way isn’t the only or even the best way. I really liked Marco towards the end, but I didn’t feel all the time like he was sincere or if he was always manipulating Senna to get what he wanted.

Overall though I enjoyed this story bunches and am definitely going to have to re-read this bad boy a couple times. It’s nice and quick, with some very steamy scenes.

“We can do a paternity test. I know you’ll want to do that.” Senna watched as his grip tightened around Max almost imperceptibly.

“Well, it’s not necessary for me. I know you’re Max’s father. But it would probably be good just to get one on file.”

“There’s a test already on file. Would you like a copy? I can have someone send it to you.”

Senna blinked. How had he managed that?

She straightened up and leaned closer. Her voice lowered and she laid a protective hand on Max’s chubby leg. He rewarded her by blowing spit bubbles her way. “Marco, you better tell me right now what you’re talking about.”

“My security team was able to obtain a sample while your roommate was at the park with Max.” His voice was almost detached, like he was commenting on the weather.

“Abby let some stranger swab my son? No, not possible.” Senna began to shake, and her hand tightened around Max’s leg. The idea of someone being close enough to Max to touch him without her knowledge made her nauseous.
“Nobody swabbed Max. Even I didn’t want my investigators to touch him without your permission. But one of them may have taken one of his pacifiers from his stroller when Abby wasn’t looking.” His blithe words made it sound like he was recounting an uneventful cocktail party. “He was perfectly safe the whole time.”

A fierce flame of anger ignited in her belly. She’d experienced a few protective “mamma bear” moments since Max was born, but his casual indifference was galling. “And you just did this. You didn’t think about consulting me? Or, I don’t know, picking up the phone and calling me?”

“Senna, you worked here for how long, almost a year? You should know that the Medinas find a way to get what they want. I’d advise you to remember that.”

Gone was the sweet new father charm that had played out over his masculine features. Now his eyes were hard, probing, daring her to challenge him back. Senna knew he didn’t like having his actions questioned, but she had no desire to play the role of compliant subordinate.

She stood quickly. “Give me my son. We’re leaving.”

“No, you’re not. Sit down.” Marco made no move to stand, and he held Max even tighter in his grip.

“You can’t do things like that, Marco. This isn’t your village back home where you control everything around you because that’s the way the Medinas have done it for centuries. I won’t let you roll in here and take over. It’s not going to happen. So give me my baby; we’ll be in touch.” How did this get out of control so fast?

“I have no intention of letting you or Max go anywhere.” 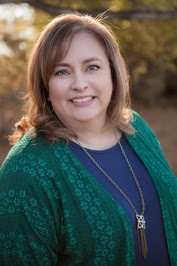 Amy Ayers remembers writing her first fiction as an introspective tween in rainy Portland, Oregon. She took a break from writing to move with her family to the desert of Phoenix, Arizona. She graduated from the University of Arizona with a degree in Journalism and a minor in Women’s Studies which lends itself to writing strong, opinionated heroines. She has worked as an Editor, a Job-Skills Trainer, and as an Executive Assistant. She even spent a college semester writing articles for the Tombstone Epitaph in the town ‘too tough to die’. She currently divides her time between her writing, her family (including one husband, four boys and two dogs), and her daily commute to work. A life-long lover of literature, she began writing her own contemporary romance in earnest in 2014 and is thrilled to be published with Entangled. She hopes to win the lottery someday so that she can devote all of her time to writing; until then, she writes when she can.

Connect:  Twitter | Goodreads
Posted by Reese's Reviews at 1:00 AM