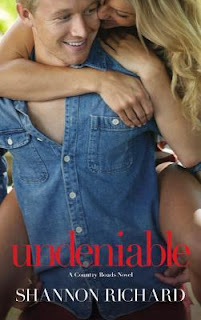 
Blurb:
THEIR LOVE WAS UNDENIABLE

Grace King knows two things for certain: she loves working at her grandmother's café and she loves the hunky town sheriff. She always has. As she bakes him sweet treats, Grace fantasizes about helping him work up an appetite all night long. But whenever she thinks she's finally getting somewhere, he whips out some excuse to escape. Growing up, he never looked twice at her. Now Grace won't rest until she has Jax's undivided attention.

Jaxson Anderson can't deny that his best friend's kid sister is the sexiest woman in Mirabelle, Florida. Unwilling to burden Grace with his painful past, Jax keeps the sassy blonde at arm's length. Yet one heated kiss crumbles all of his carefully built defenses. But when a town secret surfaces, threatening to destroy everything they believe in, can the man who defended Grace from bullies as a child protect her now?

Reese's Reviews:
I grabbed this book not too long after reading the first book Undone. Grace and Jax were both characters I was excited to see if they would end up together.

Jax has never believed he was good enough for Grace and so he’s stayed away. Grace has always been in love with Jax. He was the boy who saved her from bullies and protected her. Jax has an abusive father who time and time again told him he wasn’t good enough for anyone and so he doesn’t believe he’s good enough for Grace. In the last book we learned about a blogger who spreads nasty rumors about people she doesn’t like. When a terrible story gets out on the blog about Grace, Jax can’t stand that he can’t protect her. When Grace tries to make a move on Jax and he seems to not return her affections, she decides to stop waiting around.

I don’t want to say too much more because I don’t want to give it away but I like that this story really goes into how hard it is sometimes to move past what your parents tell you. Shannon Richards does an amazing job at creating realistic characters.

Jax has had a hard life growing up. He’s very protective of his friends and surrogate family -Grace’s family. Jax is a police officer and that role plays a part in how he reacts to certain things sometimes. He doesn’t think he’s good enough for Grace so he stays away, but he always makes an excuse to see her in the mornings for coffee and baked treats. I liked Jax’s character. Like I said I think Shannon Richards does a great job at creating realistic characters and Jax to me is super realistic. I like how sometimes he doesn’t do the right thing and he makes mistakes. Jax makes a lot of errors in judgment when it comes to Grace, but he does everything he can to make them right and to keep her safe.

Grace has been in love with Jax almost all her life. She’s spent a lot of time trying to get his attention for him to see her as a grown up and a woman instead of her big brothers little sister. Grace does everything she can to take care of Jax with food and things because she knows he doesn’t really take care of himself in that regard. I think despite the fact that Jax did a lot more growing in this novel than Grace did she had her own bit of character development.

I’m excited to see where the next book in this series takes me, hopefully I can get my hands on a copy sooner rather than later. I think you can read these stories as stand-alones but some aspects of the story won’t completely make sense. Great writing and characters. The romance is off the hook and very drool worthy. 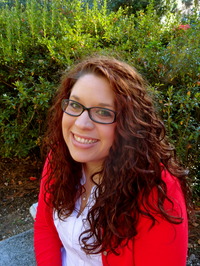 Shannon Richard grew up in the Panhandle of Florida as the baby sister of two overly protective but loving brothers. She was raised by a more than somewhat eccentric mother, a self-proclaimed vocabularist who showed her how to get lost in a book, and a father who passed on his love for coffee and really loud music. She graduated from Florida State University with a bachelor’s in English literature and still lives in Tallahassee, where she battles everyday life with writing, reading, and a rant every once in a while. Okay, so the rants might happen on a regular basis. She’s still waiting for her Southern, scruffy Mr. Darcy, and in the meantime writes love stories to indulge her overactive imagination. Oh, and she’s a pretty big fan of the whimsy.