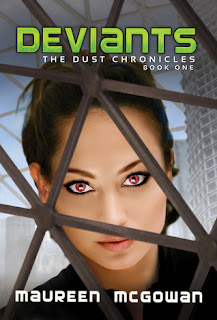 Blurb:
In a post-apocalyptic world, where the earth is buried by asteroid dust that’s mutated the DNA of some humans, orphaned, sixteen-year-old Glory must protect her younger brother and escape the domed city that’s been her entire world.

Outside in the ruins, they’re pursued by the authorities and by sadistic, scab-covered Shredders who are addicted to the lethal-to-humans dust now covering the planet. Glory’s quests to transport herself and her brother to safety make up the thrilling and fascinating first volume of The Dust Chronicles.

I think I won this book a while back and after reading a long line of craptastic books I figured I would start a book I had next to no knowledge about, so I picked up Deviants.

Deviants is a dystopian novel about a world where an asteroid decimated Earth and mutated some of the remaining humans.


Reese's Reviews
Three years before the novel beginnings Glory’s father killed her mother and left her brother Drake paralyzed. Their father turned out to be a Deviant- a human with powers/abilities. Glory is a 16-year-old living in Haven keeping her brother and her abilities hidden. After her brother was crippled years ago she knows she has to keep her brother Drake a secret of else the authorities may send him to the hospital-where no one ever returns. So Glory fights to keep her family from starving. One-day Glory meets another Deviant claiming to know her father Glory knows everything is going to change.

The seriously enjoyed Deviants from the get go. The story was set in an interesting world and I was drawn in from page one. While some aspects of this world are similar to that of other dystopian novels like a corrupt authorities and raging poverty. The government has a lot of rules and if anyone breaks them they are severely punished. The Haven has a lot of dark and twisted secrets and I was shocked to discover some of them. They are seriously twisted.

Glory was an interesting character. After what happened to her parents she was forced to grow up quickly to survive. Glory becomes a parent to her younger brother who can’t help or provide for either of them. She’ll do anything to protect Drake, even leave her friends and family to keep him safe. Glory has a hard time trusting people since she was betrayed by the person she thought she could trust the most. Sometimes she can be overly cautious at times, but it was completely understandable.

There is a bit of a love-triangle in this story but it doesn’t overpower the story. There are a lot of complications with both boys so it will be interesting to see how all the characters grow and who Glory will ultimately end up with. I have a favorite myself, but both guys are good guys.

Maureen McGowan has written such a captivating story it’s hard to believe I haven’t really heard of her before I got this book. I really enjoyed her writing style. She gave enough description for it to feel like I was taking everything in realistically with the character rather than overly describing everything. The plot was definitely exciting with a good pacing-not too fast or too slow. There were lots of exciting turns of event and I loved every bit of this book. I went out and nabbed book two right away. 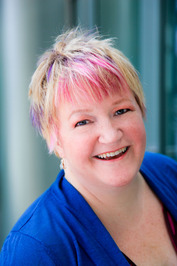 Maureen McGowan always loved writing fiction, but side-tracked by a persistent practical side, it took her a few years to channel her energy into novels. After leaving a career in finance and accounting, she hasn’t looked back.

Aside from her love of books, she’s passionate about films, fine handcrafted objects and shoes.

Maureen grew up in various Canadian cities and her previous career moved her to Palo Alto and Philadelphia, before she settled in Toronto, Canada where she attends the Toronto International Film Festival each year.