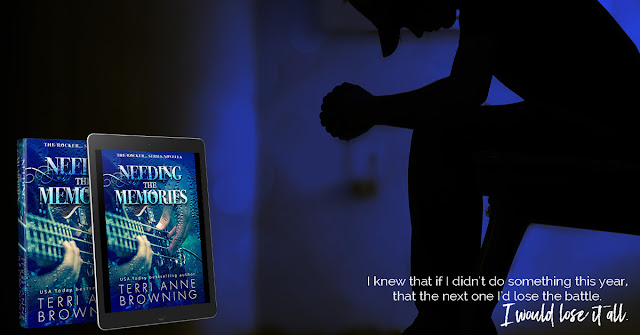 BLURB:
Happy Ever After doesn’t end at the Epilogue. The Epilogue is really only the beginning. For us, it’s meant sharing every high, every low, and loving each other even more when we come out the other side still standing. He’s everything I’ve always wanted. My best friend. My lover. My husband…

My Demon.
And I’m his Angel.

Our life hasn’t always been perfect, but to me as long as I get to wake up to Angel in my arms every morning and get to tuck our girls into bed at the end of each day I’ll be the happiest man in the world. Nothing can come between us, nothing can tear us apart.

Only…I have one regret. One that is still a black void in my head.

Every year it’s the same.
The regret.

The self-loathing for the man I was back then.

The anger that I’d taken something from the woman who has given herself to me so freely and being unable to remember a single second of it. This year it’s worse for me. It’s slowly driving me crazy.
Maybe it’s time to hit rewind and give us both a do over for that night.

Maybe what I really need is a memory to replace that empty blackness that is trying to swallow me whole.
------
Purchase it now:
Amazon US: goo.gl/i3QoNF
Amazon UK: goo.gl/kjWcfs
Barnes & Noble: goo.gl/WzizVT
Kobo: https://goo.gl/ZFvaGN
iBooks: goo.gl/xiuPoF

EXCERPT
The bedroom was empty so I went into the living room. Empty. The door to the balcony was open, letting a slight breeze blow into the room. Outside, lights twinkled and danced in the growing darkness. Faintly I heard laughter coming from the pool in the courtyard.

Following the sound of his voice, I headed for the dining room, and stopped when I saw the table set for dinner. Candles were already lit, beautiful china in golden rose was set out, and even a bottle of what looked like sparkling cider was in a bucket of ice on the table. None of this had been there when I’d gone in for my shower. But it was the man standing in the center of the room who had my breath catching in my throat.

Dressed in a black suit, with his jacket hanging open to reveal his shirt untucked and unbuttoned, Drake looked delicious. He’d taken the man bun down before we’d left the house earlier that day, but it was back now. Like me, he was completely barefoot. “I take it we aren’t going out for dinner, then?”

A lopsided grin played at his lips. Fuck, that grin did dangerous things to my heart. For a second I couldn’t catch my breath as he walked toward me. “Well, I have this wife who doesn’t like ostentatious places that would be considered romantic. So I figured I’d treat her to dinner in tonight.”

“G-good idea,” I whispered as he held out his hand. My palm rubbed against his before he clasped his big fingers around it and then pulled me in close. As if by magic, soft jazz music began to play, and I barely noticed when Drake tossed the remote to the stereo that was hidden somewhere in the penthouse.

His free hand went to my waist, and he lifted our joined hands up until they rested over his heart. My heart beat erratically as we started to sway to the music. In all the years we’d been together, the times we had gone dancing were few and far between. It was one of my few pleasures that I didn’t indulge often. Getting to do so now, with my delicious husband’s arms around me as we danced around the room with nothing but candles and moonlight streaming through the windows, was something I would treasure for the rest of my life.

I felt his lips brush over my temple as he hummed along with the song, making his chest vibrate and affecting me in the most primal of ways as my panties became soaked with need for him. The music shifted from one song to another, and everything inside of me melted when I heard our song. 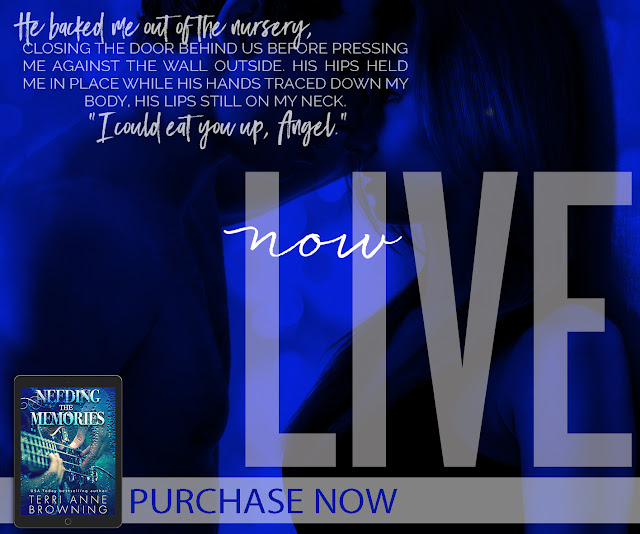 
Terri Anne Browning is the USA TODAY bestselling author of The Rocker...Series. She started writing her own novellas at the age of sixteen, forcing her sister to be her one woman fan club. Now she has a few more readers and a lot more passion for writing. Being dyslexic, she never thought a career in writing would be possible, yet she has been on best selling lists multiple times since 2013. Reese: A Safe Haven Novella was her first Indie published book. The Rocker Who Holds Me changed the tables and kicked off The Rocker... series featuring the sinfully delicious members of Demon's Wings. The Rocker... Series has since expanded to OtherWorld with Axton Cage and his band members. Other books by Terri Anne include the Angel's Halo MC Series as well as The Lucy & Harris Novella Series. Terri Anne lives in Virginia with her husband, their three demons---err, children--and a loveable Olde English Bulldog named Link.