Promo: Eye of the Storm 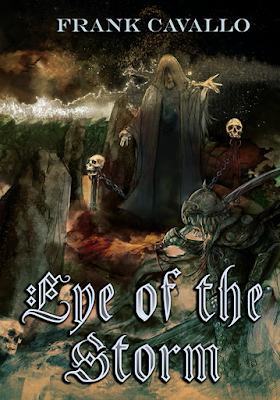 Eye of the Storm is a new Dark Fantasy / Sword & Sorcery novel by Frank Cavallo. It is recommended for fans of Edgar Rice Burroughs, Karl Edward Wagner and Robert E. Howard.

“It's a story about two people from Earth trapped in a parallel world that is sort of a "Land of the Lost" where, for reasons that become apparent during the course of the story, people and creatures from every era of Earth's history have been snatched up and similarly stranded--some for so long that they no longer recall that their ancestors came from anywhere else,” says Frank. “In the course of trying to find a way back home, they encounter a kingdom of living Neanderthals, who are not cavemen but civilized humans with a culture similar to ancient Mongols or Scythians. They also find a city populated by Etruscans, the ancient pre-Roman rulers of Italy, who have discovered a way to manipulate the currents of dark energy in that parallel world to accomplish things that look like magic.”


Synopsis:
On a research mission in one of the most remote regions of the world, former Navy SEAL Eric Slade and Dr. Anna Fayne are caught in a mysterious storm. Catapulted through a rift in space-time, they are marooned on a lost world.

Struggling to survive and desperate to find a way home, they must confront the dangers of this savage land—a dark wizard and his army of undead—a warrior queen and her horde of fierce Neanderthals that stands against him—and a legendary treasure with the power to open the gateway between worlds, or to destroy them all: the Eye of the Storm.

Praise:
“Eye of the Storm is a terrific fantasy from Frank Cavallo… Imagine being caught in the Eye of the Storm; chased by pterosaurs and other creatures that are supposed to be extinct, in a prehistoric setting that has traces of ancient Roman culture and other significant eras. Frank Cavallo’s novel has an intriguing, ongoing sequence of activities I really liked. He is very imaginative and it shows in his writing, which is descriptive and well defined.” – 5 Stars, Readers’ Favorite

The halls were dusty and cold as they headed into the heart of the citadel, climbing towards the Keep by Azreth’s vague directions. Spider-webs hung like curtains along the walls. Every corridor and passage was choked with the detritus of war. A hiss seethed from somewhere in the shadows.
At the crest of a winding staircase, they found a gallery-like corridor that opened under a vaulted ceiling. Despite having stalked the ruins for hours, their torches were no lower, and they cast a reddish light upon the whole of the grand hall. The walls were plastered from floor to ceiling, in brilliant shades of violet, green and gold. Unfamiliar characters were set in relief across both sides.
They continued on, hoping to glean some direction from the strange decorations. With a few of the glyphs there were images of figures. Men and beasts, elegant in detail but difficult to see in the torch-light, cavorting as if frozen in time. Some frolicked in festival, while others looked to be at war, painted blood dripping from their swords.
Each wall had several such murals, of men and women in long white robes and gold sashes. The designs were intricate and beautiful and savage.
At the far end of the hall, looming over the entrance of an inner hold, a stone carving larger than a man’s height peered down at them. It was no human face. The features of the carving were a caricature of humanity, still as sharp as from the sculptor’s hand; like everything else uncannily preserved from the ravages of time.
Horns like a bull’s grew from the temples. Jowls like a hound’s hung open, with rows of teeth flanked by twin fangs.
“We’re getting close,” Azreth said. “I remember this. The bust of Wrael. This is the passage into his throne chamber.”
They all studied it for a moment, but had little time to consider. A rumbling grew up, as if the walls were coming to life. The stone began to vibrate, and the floor shifted beneath them. It was no quake. The thunder was organic, the growling of a carnivore.
“You remember this too?” Slade asked.
“The beast king’s guardian,” Azreth whispered. “The basilisk.”
Spawned from the darkness, something slinked out from beneath the statue. Though at first as black as the shadow itself, it moved of its own accord. Only its crimson eyes were visible. Threya gripped her sword. The thing shrieked. Slade pulled Azreth behind him. Kerr ducked with him, even as he drew a dagger from his cloak.
A lizard-beast leaped into the firelight. It drooled from a snout like a wolf’s, but its body was lean and scaly. The monster slashed at Slade. The force of its thrust knocked him to the floor, a gash torn in his arm.
Threya’s sword whistled through the air, slicing into the basilisk’s haunches before it could strike again. Her second slash tore open its back. The beast flicked its spiked tail, climbing halfway up the wall in a momentary retreat. It eyed Threya with a burning scarlet glower.
It leaped next toward her, throwing itself upon the warrior-queen. Again, the force of its landing was too much, and she collapsed under it, leaving the beast perched on top of her. Its powerful legs pinned her arms to the floor, holding down her sword. It reared its jaws over her, spilling hot, fetid breath in her face.
Back on his feet, Slade jumped from behind and Kerr from the other side. Both plunged their blades through the creature’s torso. Slade clamped his arms around the beast’s throat as it howled, until it squealed with a weakened yelp as the leper’s dagger choked the life out of it. Azreth neared, poking at the carcass with his staff.
“We’re very close now,” the mystic said. 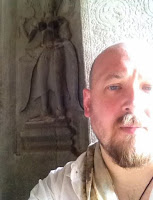 About the Author:
Horror and dark fantasy author Frank Cavallo's work has appeared in magazines such as Another Realm, Ray Gun Revival, Every Day Fiction, Lost Souls and the Warhammer e-zine Hammer and Bolter.

His latest novel, Eye of the Storm, was released in August 2016 by Ravenswood Publishing.

“In Eye of the Storm, I try to bring back some of the elements that I like from old time pulp fiction,” says Frank. “It is a throwback to old school adventure stories, combining the pacing and the feel of those classic tales with some newer elements that are not all that common to typical fantasy fiction.”

Frank’s previously published works include The Lucifer Messiah, The Hand of Osiris, and the Gotrek & Felix novella Into the Valley of Death. He is currently working on a new novel, The Rites of Azathoth, with Necro Publications, due out in February 2017.

Frank was born and raised in New Jersey. He graduated from Boston University with a degree in Communications in 1994 and he earned a JD from the Cleveland Marshall College of Law in 2001. He currently resides in Cleveland, Ohio, where he has been a criminal defense attorney for fifteen years.
Readers can connect with Frank on Facebook, Twitter, and Goodreads.

To learn more, go to http://www.frankcavallo.com/
Posted by Reese's Reviews at 9:28 AM