FIGHT FOR ME Release Blitz 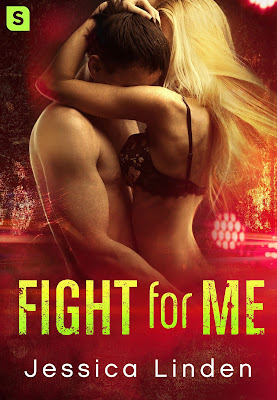 From debut author Jessica Linden comes a sexy romantic suspense novel featuring an MMA fighter and an heiress on the run who must stay together if they are to defeat what hunts them...and explore the passion that surrounds them.

Book Description
Raised in the streets, Knox is a battle-worn MMA fighter with no past, present, or future. Fighting every day just to survive, Knox owns nothing but the pride in his victories and the scars on his hands. When his control snaps and he must flee the city to keep his life, he runs into a stunning woman with the same intent. All big eyes and delicate features, she's not cut out to survive on her own. And when finding her own inner strength leads to a shocking act of violence, Knox knows he must protect her at all costs...

Natalie couldn't spend another day under her father's lock and key. Raised to be the perfect picture of wealth and sophistication, she detests the dark, ugly side of her father's greed. Refusing to be held captive by her life a moment longer, she escapes his fortress - and runs right into the arms of the strongest, most dangerous, most desirable man she's ever met. As instant attraction leads to explosive passion, Natalie finds she cannot leave his side. But as their pursuers loom closer and threaten to tear them apart, Natalie and Knox have to decide: is it easier to stand apart? Or is a love this strong worth the fight? 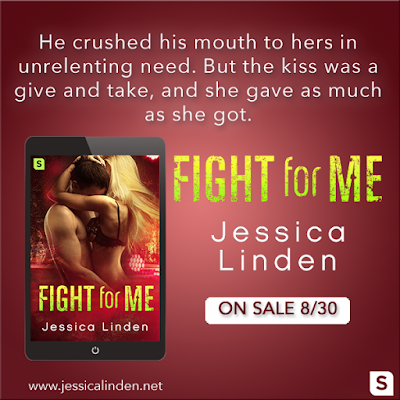 EXCERPT:
Natalie spun, and her eyes focused on her rescuer, getting a good look at him for the first time. His eyes were hard and fierce, and for a moment she regretted not listening to his demands that she run. She should be scared. This man was dangerous. He looked it, and she’d already seen firsthand what he was capable of. Would she be any safer with him?
Yes. Instinctively she knew she was. He’d put his life on the line to save hers. She could trust him.
Looking into his eyes now, she felt the panic slowly begin to leave her and her thoughts became a little more coherent. Looking at him, in the middle of this blood-soaked horrible alley, she found her center in an unlikely place­—in the abyss of his dark eyes. Something clicked when she looked at him.
“Are you okay?” re repeated.
She nodded, then glanced to the side at the body next to her. His back was to her and through his hair matted with blood, she could see into his head. She squeezed her eyes shut and turned her face away. Even though she knew the answer, she had to ask.
“Is he … did I kill him?”
His expression was grim, and she knew she had. She was a murderer. Oh God, oh God, oh God.
No, stop. There was no time for this. She looked at the man’s face again and found her focus.
His face softened a touch, and he held his hand out. “Come on.”
She looked up at him. “What should we do?”
“We need to get out of here.”
She looked over at the body once more and wrapped her arms around herself. “I killed him.” Her lip trembled, but she sucked it in. This was no time for tears.
“You had no choice.” He paused. “Why was he after you?”
“He was sent by my father.” Her voice was mechanical. She didn’t even know this guy’s name. She squeezed her eyes shut. That’s not important right now. “My father is not a good man,” she added.
Sirens blared in the distance.
“Fuck.” He grabbed the gun and hastily wiped it down with his T-shirt, then hesitated briefly before tossing it into the Dumpster.
“We need to get out of here,” he repeated holding out his hand again. The sirens got louder, their urgency snapping her out of her fog, and she put her hand in his.

Author Bio
JESSICA LINDEN lives in Virginia with her college-sweetheart husband, two rambunctious sons, and two rowdy but lovable rescue dogs. Since her house is overflowing with testosterone, it’s a good thing she has a healthy appreciation for Marvel movies, Nerf guns, and football. Her books include Fight for Me.


Titi.Oluwo@stmartins.com
Posted by Reese's Reviews at 1:00 AM