ARC Review: Stripped by a Vampire 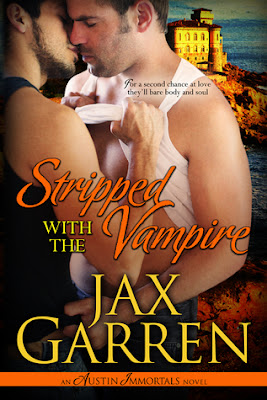 
Blurb:
In a world of dark spells and blood ties where no one is safe, love is the most powerful magic of all.

Shy vampire Charlie never intended to see Vince again after the bad boy human broke his heart. But when Vince turns up beaten and marked for sacrifice to an Aztec God, Charlie will do anything keep him safe.

Vince has never forgiven himself for the lie that ended things with Charlie. The spark between them is as hot as ever, and Vince would risk body and soul to make it a fire again. But as they hide deeper in Austin’s supernatural society—a world of lies, dark magic, and warring immortals—he finds the path to reconciliation more twisted than he’s ever imagined.


Reese's Review:
This book was AWESOME!!! Jax Garren is now on my ‘Authors I must read’ list.

Stripped by a Vampire was nothing like I expected and I loved it. There was an actual story with characters in it and I was expecting more of a story with just sexy times. I love me some M/M sexy times so I wasn’t opposed, but seriously this was better than I could have imagined.

Vince used to date and be in love with a vampire, then his vampire boyfriend Charlie found out he was a stripper and their relationship ended. Now five years later Vince was scheduled to dance for a party and was attacked by vampires and almost died. When he finds Charlie he knows he’s the only one who can help him. I loved Vince. I felt like his character really grew and he was just amazing. He had a great inner strength and didn’t let peoples’ poor opinions about homosexuals bring him down. His relationship with Charlie is phenomenal and I loved how the two of them interacted and brought out the best in each other.

Charlie grew up a long time ago and with that comes his fears about how people will treat him because he’s gay. So he hides who and what he is from the human and vampire world. Loving Vince he definitely isn’t allowed to hide who he is anymore since Vince isn’t ashamed of who and what they are, nor does he care what people think. This was a big problem between Vince and Charlie since Charlie wanted to hide their relationship and Vince didn’t. I enjoyed the real life problems they had and how throughout the book they grew together and because of each other. Plus the sexy times were beyond awesome.

Stripped by a Vampire isn’t just about Charlie and Vince’s love story. It has magic, and sacrifice, and ancient Gods, super hilarious characters, and so much more. Honestly this book has everything you need for an awesome book. I can’t wait to see what this author does next. 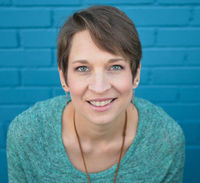 Jax Garren is the author of hot, urban paranormal romance like the Austin Immortals and the Tales of the Underlight. Though descended from Valkyries and Vikings (she’s part Swedish), Jax was raised a small town girl in the Texas Hill Country. She graduated from The University of Texas with a degree in English and a minor in Latin then found her own Happily Ever After with a handsome engineer who is saving the world through clean energy technology. Jax can be found at jaxgarren.com, at facebook.com/JaxGarren or on Twitter as @JCGarren. She loves meeting new people, so online or in person, make sure to give her a Viking “Hail!” adventure, and love.