Celebrate the release of Reckless
by Janet Elizabeth Henderson! 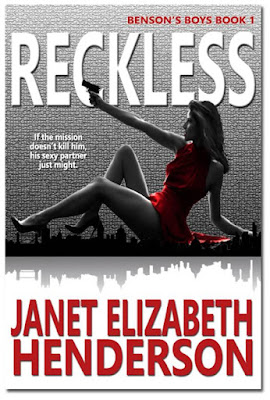 
Synopsis:
The new London office of Benson Security hasn’t even opened its doors yet and already it’s neck deep in its first case…
If the mission doesn’t kill him, his sexy partner just might.
Dimitri Raast and Megan Donaldson have a common enemy—the head of an organisation that specializes in human trafficking and sexual slavery.
They have similar motivation—Dimitri’s sister was taken by the organisation, and Megan’s sister is threatened by it.
They have the same goal—eliminate their enemy and save their sisters.
Given they have so much in common, you would think working together would be a piece of cake.
You would be wrong.

While Dimitri brings skills and experience from years as a US Army Ranger to their partnership, Megan brings a background in failed career choices and an ability to cause trouble wherever she goes. Yet, even with so much at stake, Dimitri can’t resist Megan’s particular brand of crazy. She’s wild, she’s sexy and she’s fearless. An irresistible combination for a man who lives his life completely in control. Now, after almost a year with one all-consuming focus, Dimitri finds himself torn between rescuing his sister and protecting the woman he wants - from herself.
Before she gets them both killed.
Available at: Amazon | iBooks | Kobo | B&N


Excerpt:
They were meeting Johnny Rotten in a dark alley. Of course they were meeting a guy called Johnny Rotten in a dark alley. Megan rolled her eyes. Obviously Johnny went to the TV movie school of how to be a bad guy.
“You stay here.” Dimitri pointed at a dumpster. Yeah. A dumpster. She half expected some guy with a camera to shout cut and make them start again.
“You don’t mean in the dumpster, right?” Because—eew!
“No. Beside it. In the dark.” He didn’t even try to disguise that he was losing patience. “Don’t move, don’t make a sound, don’t interrupt.”
Blah, blah, blah, let the big boys play. She was so tired of hearing the same old tune. It was time to change the radio station.
“Right,” Dimitri said. “I’m going to drive round and come in from the other end.”
“Why can’t I just wait in the car? It’s cold and it stinks here.”
“Because…” He stretched the word out. “You’re supposed to be my hostage. I can’t just let you hang out in the car.”
“I can pretend to be drugged.”
“No. Too dangerous. He might spot you, know who you are and that Rudi wants you. Then what would stop him deciding to eliminate me and take you to Rudi himself?”
She stamped her feet to get her blood circulating before the chill removed her toes. “Why didn’t you just take me back to the office?”
“You’re my backup.” There was a silent ‘idiot’ attached to that sentence, she just knew it.
“The backup that hides in dumpsters?”
“The backup that phones for help if it looks like things are going south.”
Megan blushed, grateful he couldn’t see it in the dark. “So, I need my phone?”
He put his hands on his hips and looked skyward for a moment. “Where is it?”
“Car.” She gave him what she hoped was an apologetic smile.
He stomped off, cursing under his breath and came back a few minutes later with the phone. “Sorted now?”
Megan nodded. It probably wasn’t the best time to tell him she really needed to use the bathroom. She could hold it. How long did it take to have a covert meeting in an alley anyway?
She gave him a thumbs up and watched him march back to the car. Leaving her alone in a stinky, dark alley. Alone and not thinking about how good Dimitri’s lips felt against hers. Nope. She wasn’t thinking about that at all. She was a professional—nearly. She had a job to do. She backed into the shadows and tried to become invisible. Ninja Megan. She could do it. It was all about the power of the mind. She closed her eyes and took a few calming breaths.
That’s when her stomach rumbled. Her hand smacked flat on it as she bit her lip. Maybe all that fried food wasn’t such a great idea after all. Not that she would ever admit that to Dimitri. She was still mad at the man. Sure she’d been the first to say they weren’t in a relationship, but he didn’t have to agree so enthusiastically. He’d sounded affronted. As though she was the last person on earth he’d consider dating. It was insulting. Her stomach made a strange bubbling sound as she saw Dimitri’s SUV pull up at the other end of the alley. He got out and stood under the yellow glow of the street lamp. Waiting. Alert. Moody.
Megan’s stomach rumbled again. Loudly. This wasn’t good. So much for not making a sound. Her own body was working against her. She crouched down in an attempt to dull the noise, and hoped it worked. She closed her eyes, tried to calm her stomach and think thoughts that made her invisible.
That’s when she farted.
It wasn’t silent.
Megan dropped her head to her knees. If the bad guys didn’t get her, she’d die of humiliation.
And then her stomach rumbled again.
© 2016 Janet Elizabeth Henderson


Follow the tour and enter to win great prizes!
2 grand prize winners will receive a $10 Amazon Gift Card. 2 runner-ups will receive an e-copy of choice from Janet’s backlist!


Visit all the blogs participating in the tour for reviews, excerpts, guest posts and more chances to win! 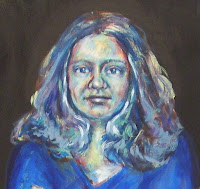 About Janet Elizabeth Henderson:
I grew up in Scotland, but now I’m living in New Zealand - married to a Dutch man whom I met in America. (It can get a little confusing in my household!) When I'm not living in my head, I'm a mother to two tiny kids, three pet sheep, three miniature horses, three alpacas, one dog, two cats, several chickens and an escape artist goat.

5 random things about me:
1. I accidentally mooned a crowd at a Bolivian wedding.
2. I've been chased by a gang of baboons. And I mean gang. They were organised and vicious. All that was missing was their leather jackets and tattoos!
3. I wrote my first novel when I was 22. It was a cross between Star Wars, Monsters Inc. and Tinkerbelle. Funnily enough, no one wanted to publish it. Odd that...
4. I was a portrait artist on the streets of Amsterdam for a time.
5. I worked night shift as a security guard at Stirling Castle in Scotland while I was in art college. The castle was on a terrorist hit-list back then. To defend it they gave me a flashlight, a two-way radio that only worked one-way and made me wear a polyester A-line skirt...


If you'd like to sign up for my newsletter, which happens sporadically - usually when books are being released - then you'll find a form on my website. I hope you enjoy my books. Happy reading!