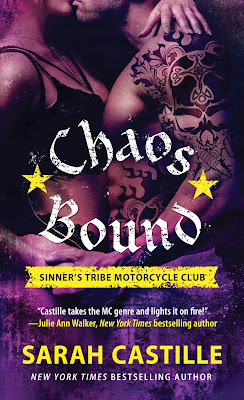 CHAOS BOUND by SARAH CASTILLE
What happens when the power of love eclipses the need for revenge?  Chaos Bound, the fourth novel in the Sinner’s Motorcycle Club series is a vivid and powerful MC romance from Sarah Castille.  Fans of Joanna Wylde and Kristen Ashley’s biker romances will love this intense, rough and raw addition to the Sinner's Motorcycle Club series.

Love is a wild ride.
After enduring months of torture at the hands of the Black Jacks MC, and betrayed by his own club, Holt “T-Rex” Savage, a junior member of the Sinner’s Tribe Motorcycle Club, will stop at nothing to get revenge. But falling for a beautiful woman with dangerous ties to his sworn enemy was never part of the plan…


Raised by the Black Jacks, Naiya Kelly grew up fast, furiously, and with little to lose. But now that she’s put her MC days behind her, she is free to do what she wants—until she meets a man who imprisons her, body and soul. She swore she’d never give her heart to a biker, but Holt is the most passionate, protective man she’s ever known. But will Holt be forced to betray his one true love to exact his revenge?

Get More information at: Goodreads  | Amazon | Barnes & Noble | Kobo | iTunes
Reese's Review:
Another fantastic and captivating story by Sarah Castille. Just when I thought her books couldn’t get any better she writes Chaos Bound.

“T-Rex” now Holt has been locked up in a torture dungeon for three months, hoping and praying for his brothers to find him. When they never came and he knew they’d stopped looking he set his sites on revenge. Revenge on the Black Jacks for putting him through the torture, and revenge on his brothers- the Sinner’s - for leaving him to rot. When Naiya is tossed down in his dungeon with him beautiful and innocent they work together to get out of the dungeon and lose Viper, the Black Jack’s president once and for all.

Chaos Bound was beyond fabulous. It pulled and squeezed my heart so much I couldn’t put it down until I finished it. The story surrounding Naiya and Holt was dangerous, sexy, and surprising.

Naiya has had a harsh life. Now her mothers dead and owes a debt to Viper the Black Jack’s President. He stole her out of her mothers’ funeral and plans to use her body as he sees fit. Naiya has always played it safe but she really kicks some major butt in this story. She grows into a stronger person and is able to go toe-to-toe with bikers, rapists, and her sexy man Holt.

Holt has been through hell and back and come out a different man. I liked the change in him, but was sad to see some of the damage and changes that took place in this story. I liked how Holt’s character progressed throughout the story and how he changed for the better.

Seriously a great addition to this story. Loved all the characters and how the story ended! Can’t wait to read more!