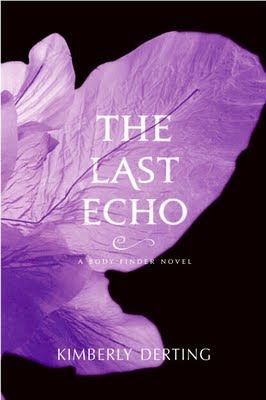 Blurb:
In the end, all that’s left is an echo.

Before, Violet's morbid ability to sense the dead led her to uncover dark murders and long-buried secrets in her small town. Now that she's working with a special investigative team, Violet hopes she can help even more people - whether by saving a life or catching a killer.

Although she's relieved to finally be honest about what she can do, her instant connection with her mysterious partner, Rafe, is both confusing and unsettling, and their unique bond creates tension with her boyfriend, Jay. When she discovers the body of a college student murdered by "the collector," Violet refuses to give up on the case. With her own relationship on the line, Violet doesn't realize that the serial killer is looking to add to his collection and that she may have caught his eye. Will the life Violet has to save be her own?


Reese's Review:
So loving this series. This series has been on my wish list for a while now and I am so happy it did not disappoint. This book along with the first two books is simply amazing.

Violet can feel the dead meaning she finds dead people. The story as usual alternates from Violet’s story to the murderers although in the second book they did do something different but following the trend of the first book it’s the murderer. We don’t ever find out who he is but he’s known as the “Girlfriend Collector.” He finds girls who he thinks will be perfect for him, stalks them, kidnaps them, dresses, feeds, and paints their nails. It’s terrifying and waay to real. If you are home alone and get scared easily don’t read.

Anyway Violet finds dead people and she’s learning to calm her powers so that after she finds them she doesn’t suffer for days on end. She’s working with a group of other “gifted” teens who have different powers. Sam, Rafe, Gemma, Krystal, and Sara who we’ve read about in the other books. They all work together to solve murders. They should make them a Law and Order show. Anyway even though Violet can finally be open about who she is and her powers she feels a bit useless when it comes to saving people because she finds dead bodies and not live ones. So she heads out to do some investigative work and that’s how she gets the focus on her from The Girlfriend Collector. We have her boyfriend Jay who I adore and I think really makes Violet think about what she’s doing and why she’s doing it. Despite the fact that the synopsis makes this book come off as a love triangle it’s not. Violet has a connection for Rafe and is attracted to him in a lot of ways, but her heart is with Jay. I say this because love triangles are poo poo to me and I know not everyone is a fan.

I enjoyed this book so much. Kimberly Derting is seriously so original and creative. I enjoy reading about her worlds and her characters. The Last Echo definitely had me not painting my nails for weeks and just being wary of everyone, that’s seriously some powerful writing right there.

I also love how all the covers set the tone for the books and it’s original. There aren’t any cover models or anything like that. I really adore these covers even though they’re so simple.

The Last Echo and the entire Body Finder series are fantastic. I really enjoy these books and the writing. Everything feels so real and terrifying and fantastic. 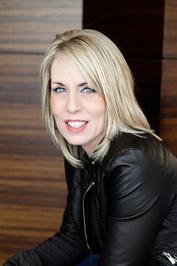 Kimberly is the author of the BODY FINDER series (HarperCollins), THE PLEDGE trilogy (Simon & Schuster), and THE TAKING trilogy (HarperTeen). She lives in the Pacific Northwest, the ideal place to write anything dark or creepy...a gloomy day can set the perfect mood. She lives with her husband and their three beautiful (and often mouthy) children who provide an endless source of inspiration.