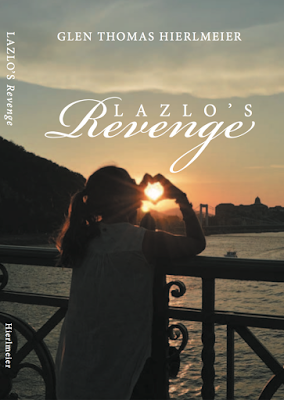 Glen Thomas Hierlmeier’s latest historical romance novel, Lazlo’s Revenge, is the story of one woman’s adventure throughout Europe to uncover her parents’ pasts.  Stories of romance, war, and traumas both physical and emotional are unearthed as she traces their footsteps back to the major sites of World Wars I and II.  Lazlo’s Revenge is due for release in June 2016 from Xlibris publishing.


Max sets out on an adventure throughout Europe to uncover her parents’ pasts and see the very places where they survived on their odyssey to escape danger and death. Stories of romance, war, and traumas are unearthed as she traces their footsteps back to the major sites of World Wars I and II.


During her journey, Max becomes fascinated by the people who influenced her parents' lives. She follows the life and times of Lazlo Floznik, the man who saved her parents and helped them escape catastrophe in Europe by seeking out refuge beyond the reach of the security forces that sought to imprison them.  The years leading up to World War I, the time between the wars, and the experiences of World War II reveal their secrets as Max explores her family roots, in this deeply emotional story tied together by Lazlo’s intense story of love, and that of his father, Miklos, before him.


“Any reader who enjoys historical fiction, romance, war stories, and stories with action and adventure, should definitely give Lazlo's Revenge a read. I am pleased to be able to recommend this book to any such reader. I am also looking forward to reading more from the promising author, Glen Hierlmeier, as soon as I possibly can!” – 4 Stars, Reviewed by Tracy A. Fischer for Readers’ Favorite


I approached the first houses, gasping for breath, horrified to see the destruction being wrought by round upon round of artillery fusillades. There was no cover to be found. Dazed, I continued running, desperately trying to save myself. I passed perhaps a dozen or more homes laid nearly flat. Mutilated bodies lying all about and the wounded wailing like nothing I had ever heard. As I neared the outskirts of the city, the shelling began again as suddenly as it had stopped. Cannonade pounded in the distance. The earth trembled ferociously at my feet. Turning a corner behind what still stood of the only remaining wall of a large stone building, another round of explosions pounded the city as I leaped down into a now-exposed basement filled with debris from the collapsed upper floors—only one wall and half another standing. Hope drained from me. Each deafening blast shook my senses, sending shards of glass and cracking timbers high into the air with a sickening burst.


Darkness fell quickly in the gloomy gray of dark as I slipped over a broken wall of stones and fell into the pit of the decimated structure. I pushed tightly into a corner of what was once someone’s home, protected from the drenching rain by a small portion of what remained of a badly damaged wall hanging precariously overhead—a welcome but uncertain shelter in the midst of chaos. I pushed tightly back against the cold stone walls on either side, finding as much safety as possible against a new round of explosions that pounded above and around. Each blast shook the skeletal rubble of the house, wrenching stone and wood from tenuous perches and sending more flying debris into the desolate hole that would be their final resting place . . . and perhaps mine as well. I was trapped—I couldn’t move for fear of being crushed in that dreadful place or being shelled to death outside. I pulled my knees to my chin…all I could think to do was pray…and as I prayed…tears came but did not assuage my fear.


Mercifully, with the darkness, silence also descended—even warriors need their rest. Only screams of the wounded and desperate pleas of survivors who searched frantically through the rubble for lost loved ones pierced the cold, wet, bleak night. Soon, darkness also shrouded them in silence, all but the woeful cries of the dying calling out miserably in their hopeless plight—my hopelessness too, I thought. In my corner hideaway, I could see nothing but the black of night illuminated only by the flickering dance of fires burning what remained. I knew without seeing that only rubble lay before me, and there was no hope to be found.


Bombardment of the trenches and the city paved the way for the Russian ground troops, armored cars pulling cannons, and the dreaded Cossack horsemen. I knew they would come—surely, by morning they would come. Everything in their path would be destroyed, everyone who resisted would be killed, and all others would be taken prisoner. There was no doubt. It was their way— what Colonel Eduard Fischer and the Hungarian Army had come to Bukovina to prevent, what I bravely thought we could accomplish was lost. I had not even seen a Russian, but I knew there was no hope of saving anyone. The Kingdom of Bukovina was doomed, and surely none of Austria-Hungary would be safe. With the Hungarian Army defeated and the stronghold city of Czernovitz overrun, no one remained to save us. Even Colonel Fischer might be dead, leaving no leader to stand boldly and hold the remnant together.


In the barren darkness, my youthful excitement as a proud Hungarian soldier on a mission to save the Kingdom of Bukovina, and ultimately the empire, suddenly struck me as a foolish notion. Wearing my uniform once made me very proud, but now I was only frightened and angry. My comrades and I were assured that victory would quickly prevail, but war and death tragically became very real, fearful, foreboding, and final. I questioned myself: Was I a coward to run? Do I really know what bravery is? Do I really know what all these good people are dying for? Do I know what this war is all about? Do I even care about Jews? After all, these people in Bukovina are Jews, many of them. Are they worth the death of so many fresh, hopeful young Hungarian and Austrian men? Are they worth my life?


My head swirled with doubts. My heart ached for answers I didn’t have. Life became too real, too fast. My tortured mind flashed back to the wretched face of the too-young boy, dead in the trench, and the unknown soldier whose bloated corpse had lifted my escape. I sat in my wretched corner and questioned why I had come to such a place—why anyone would engage in such brutality.


Was this worth it…for them…for us…for anyone?


After being drenched for nearly all of three days, the rain finally stopped. The choking smell of charred remains of buildings, gunpowder, and the rotting dead hung heavily in the air. I wished for the rain again, to dilute the ghastly stench. Time slipped slowly by. The dying must have passed through death’s mercy in the eerie silence and the wounded attended to, for as I listened—no sound. Strange, I thought, that in the midst of all this evil, there should be silence. I knew it could not last. Fear grabbed my throat again. My impulse was to get up and go, take action, do something, anything, but my mind held me back—there was nowhere to go, no escape, no hope. The Russian Cossacks would be here by morning—nothing to do but hide and wait, then fight to my death, to salvage whatever honor there might be in resisting.


Below the woeful mute of night, I crouched and cowered. Shivering in fear, my mind drifted back to happier days in Budapest when, as a young boy, I…


Something fell on the far side of the rubble, sounding as if it came from behind the largest pile of debris—perhaps another dislodged stone. I leaned forward to hear and peered vainly into the darkness as my heart leaped in my chest and immense fear gripped me. The worst of my thoughts seized me—the Russians were coming in the night and rooting out survivors! Desperate, I slowly reached to my side, and silently drew out my pistol. Another sound. Someone was moving, and not more than ten meters from me.


I raised my pistol and aimed in the direction of the sounds, I was prepared to shoot anything on sight, at any slight movement—my hands trembled against the trigger. A faint light appeared, flickering behind the rubble, like the light of a small candle casting a very large, daunting shadow around me, barely visible as it slowly danced in the eerie candlelight, nearly scaring the life out of me as my finger tightened on the cold trigger.


Crying—quiet, sorrowful weeping—as if the person hidden by the pile of debris knew she had to be very quiet but could not help herself…clearly a woman, perhaps a very young woman, maybe just a girl. I was still…very still…and listened for perhaps fifteen or even twenty minutes, until the light wavered and died. The soft whimpering continued for a long, long time in the fearful dark that kept me huddled closely against the walls of my corner as though I wished to disappear in its grasp. I would wait. By the dim light of morning, I would see who my companion in that hellacious hole might be. Though I resisted, sometime later I dozed, exhausted, dreamily wishing for the safety of my home in Budapest.


I woke to the constant patter of a dreary rain as the breaking dawn cast a ghastly glow over the destruction strewn around and about me. My eyes fixed toward the sound and the light of a few hours earlier; I listened but…only quiet and stillness…no sound but the steady falling rain. 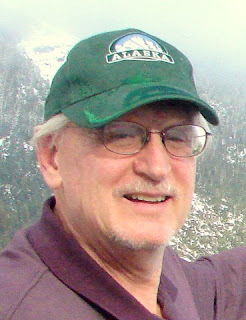 Glen Thomas Hierlmeier is a graduate of the United Sates Air Force Academy, and has an MBA from The University of Wisconsin. He served in the U.S. Air Force, where he helped develop the Manned Orbiting Laboratory and the F-15 Eagle fighter aircraft, and gained a deep interest in world affairs and warfare.


He subsequently completed a career as a banker and real estate executive, serving as President and CEO of various companies for over thirty years before retiring in 2009.


Glen enjoys writing historical fiction and has published three other books including Thoughts From Yesterday: Moments to Remember, We Had to Live: We Had No Choice..., and Honor and Innocence: Against the Tides of War, the prequel to Lazlo’s Revenge.


Readers can connect with Glen Thomas Hierlmeier on Facebook, Twitter, and Goodreads.
Posted by Reese's Reviews at 1:00 AM